Toronto Film Society presented The Chalk Garden (1964) on Sunday, January 22, 1989 in a double bill with Separate Tables as part of the Season 41 Sunday Afternoon Film Buffs Series “A”, Programme 5.

Any fan of Enid Bagnold’s “National Velvet” realizes full well that the writer’s specialty is independent-minded adolescent females.  Her global theme might well be labelled “the getting of wisdom”–to be unoriginal.  Bagnold’s play “The Chalk Garden”, a hit on both sides of the Atlantic in 1955, was no exception.  But in addition to the girl, this play presented a whole array of unpredictable eccentrics.  In particular, it presented three generations of women: a flighty grandmother preoccupied with the unpromising soil in her garden; a prickly new governess (played by Siobhan McKenna) straight out of jail; and, finally, a sadistically freakish granddaughter badly in need of some firm recycling.  These lived with a frantic zany of a butler.

When these off-the-wall characters fell into the conventional hands of glossy producer Ross Hunter (responsible for the re-makes of Magnificent Obsession and Imitation of Life), they became transformed into the most classy of Hunter-style soap-opera stereotypes.  It is difficult to ascertain just what control talented Hitchcock veteran John Michael Hayes (Rear Window, To Catch a Thief, The Trouble With Harry, The Man Who Knew Too Much) had over his assignment to adapt the play for the screen.  Or director Ronald Neame either, whose zest for zaniness evident in The Horse’s Mouth (1959) is eliminated here.  At any rate, the story goes that as the lights went up at a private preview screening of The Chalk Garden, Ross Hunter’s eyes were wet with the sentimental tears he esteemed so much.  His transformed characters suited him to a T.  The grandmother had become one-dimensionally ordered and haughty, the governess strong and valiant, and the girl as darling and precocious as a Walt Disney heroine (which indeed actress Hayley Mills was.)  Even the butler had become orderly and kindly. 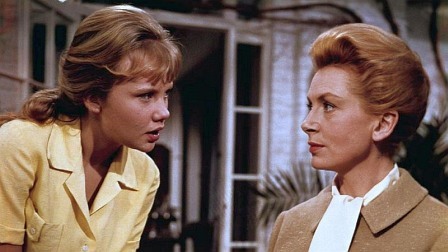 Now this kind of film can in its own way also be very satisfying–especially when handled with all the slickness of a Ross Hunter.  The casting here was superlative, with Edith Evans, fresh from her screen triumph in Tom Jones, necessarily restyling her original stage performance as the grandmother.  Nobody played governesses more regularly and more competently than Deborah Kerr, who seems here to relish this one’s criminal past.  And John Mills (Hayley’s daddy, of course) brings dignity to the role of the butler.  The result is a great deal of charm with the kind of dramatic resolution that may bring emotional tears to more eyes than Ross Hunter’s.  On its original release during a school break, it broke all box-office records at the Radio City Music Hall.

The symbolism of the title is all too obvious.  Good things can bloom in the most unpromising soil if properly nurtured.  And Ronald Neame’s experience here no doubt nurtured the talents which would make his version of The Prime of Miss Jean Brodie such a different, less sticky, delight 5 years later.