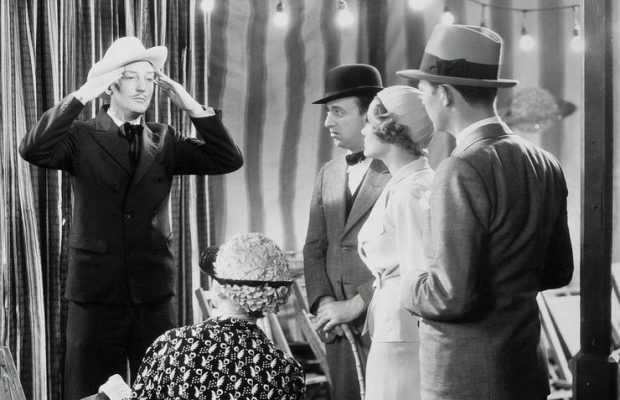 Toronto Film Society presented The Mind Reader (1933) on Monday, July 23, 2018 in a double bill with Whirlpool as part of the Season 71 Summer Series, Programme 3. 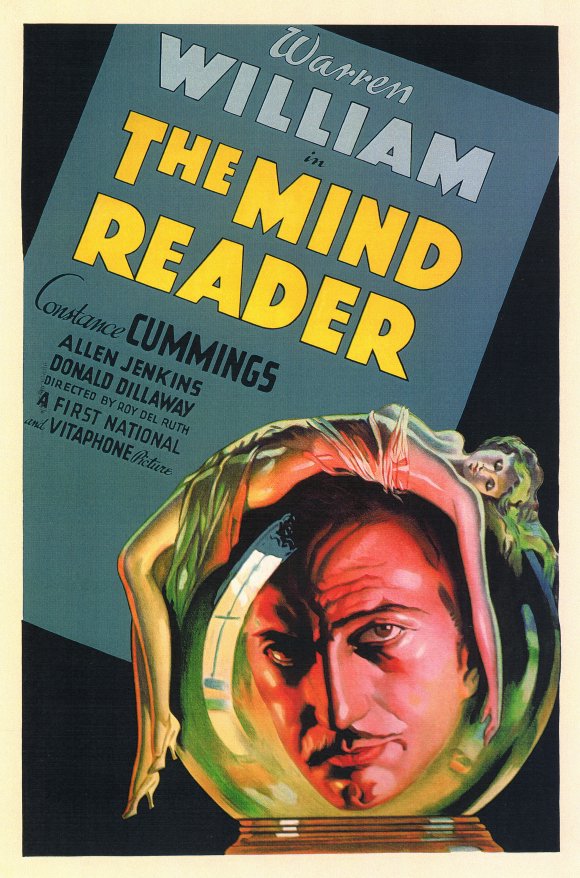 Last week we saw Warren William in his farewell film, the 1947 The Private Affairs of Bel Ami playing a character antithetical to the ones he was most famous for in his heyday of the early 1930s.  In 1932, Warren William was a busy man.  In that year alone, he made seven pictures and one short as well as having been sent by Warners on a two-week promotional tour.  Although 1933 and 1934 might have been more financially and artistically successful for him, 1932 is the year that film buffs of today love him for.  Beginning on January 18th he started the year off with The Mouthpiece, followed by The Dark Horse with Bette Davis, Skyscraper Souls, the popular to-this-day Three on a Match, the true-life story of The Match King, another beloved popular film still watched with glee today, Employees’ Entrance, ending 1932 with tonight’s film The Mind Reader.  And if this brings to mind other great pre-Code Warren William films you may have seen, that’s because he made over 20 others in just over three years, between March 1931 and July of 1934.

The Mind Reader was co-written by a former associate of Harry Houdini, Wilson Mizner, who helped the great escape artist to debunk fraudulent psychics—are there any other kind?—during the 1910s and ‘20s.  Playing to perfection, Warren William makes this film especially noteworthy primarily for his playing the leading character, Chandra, with abject cheapness.  And once Chandra is born and raking in the money, Depression-era folk were thrilled to see William and Allen Jenkins enjoy not worrying about how to spend it—which wasn’t on rent or groceries, but on important things like drinking and gambling.

Critics were lukewarm about the film, with some complaining of a danger of William’s being typecast.  However, most agreed that he was still the best thing about The Mind Reader.

It’s surprising that, although Warren William was a huge star in the early 1930s, he isn’t a household name such as Clark Gable, James Cagney or other actors from that era who still are.  Warren was born Warren William Krech on December 2, 1894 in Aitkin, Minnesota.  With a not-so-pleasing German last name, Warren chose to use his middle name as his last, professionally.  This lead to many mispronouncements in itself, with people usually adding the letter “s” to his rather unusual choice.

Warren was born into a wealthy publishing family and although he didn’t have much interest in joining the family business, he had a strong interest and aptitude for building and inventing things.

Before finding his niche in Hollywood and after attending acting school, William spent over a good decade performing on the stage.  It was while in New York, that he met through his sister, his wife Helen who was 17 years his senior.  Although they never had children, for all sense and purposes, their marriage appeared to be a success.  With inventing and sailing in his downtime, Warren never seemed to lack for things to do.

From acting school to a decade on the stage, Warren headed to Hollywood in 1931 for his second try in films.  He had acted in two silents nine years earlier, but this time he was successful and remained there until his death at the early age of 53 on September 24, 1948. 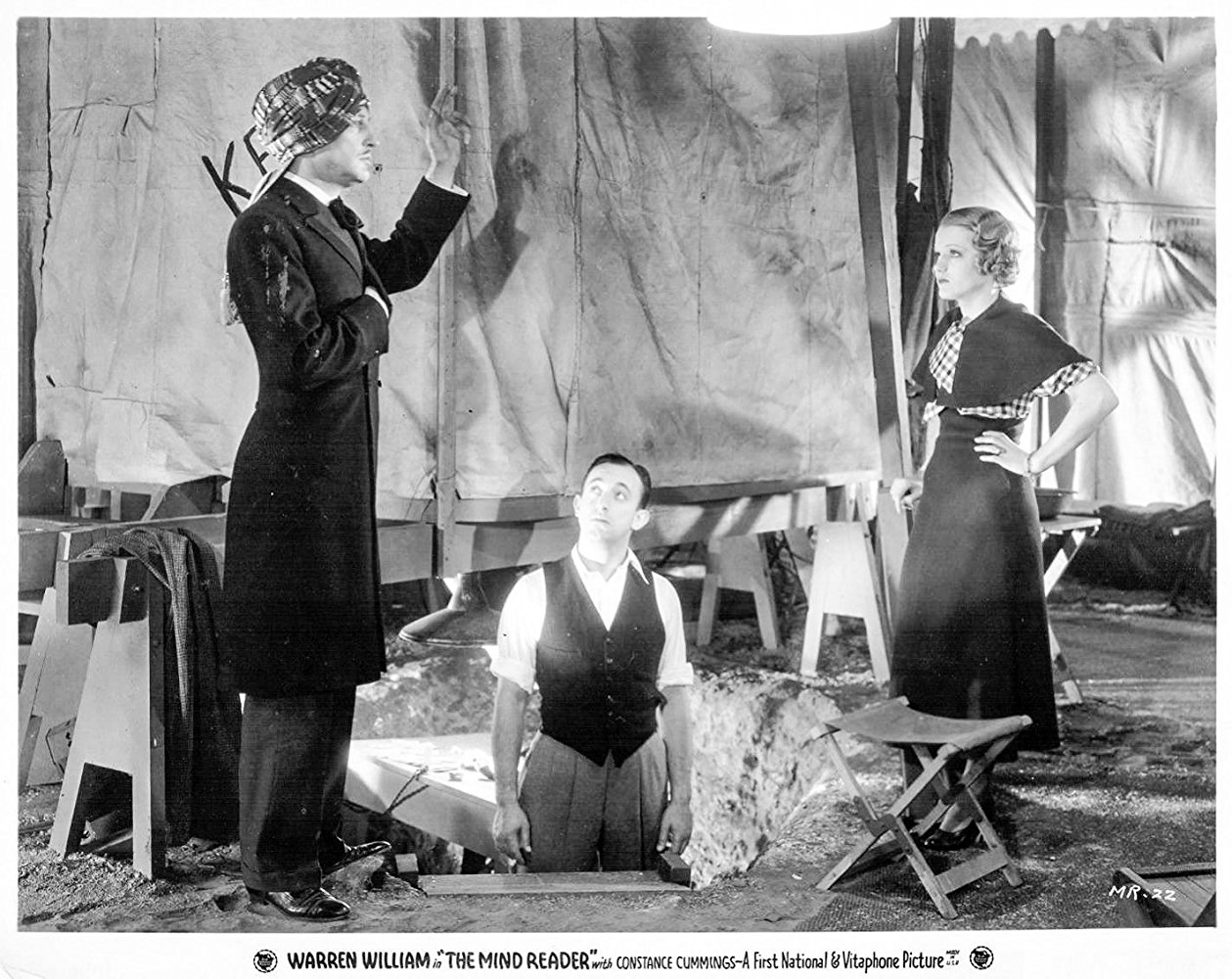 The Mind Reader is the story of a phony clairvoyant who attempts to go straight but doesn’t succeed. Too bad he couldn’t see how his life would turn out. The film is a pre-Code drama made in 1933. While the star Warren William was hugely popular in his day, his co-stars Clarence Muse and Allen Jenkins had much longer careers as supporting actors. Allen Jenkins appeared in supporting film roles from 1931 to 1974 and had many TV appearances from the Golden Age of television to 1972. He was also a stage actor, appearing in Broadway and off-Broadway productions from 1923 to 1962. Jenkins was born on Staten Island, New York as Alfred McGonegal in 1901. His formal theatrical education was done at the American Academy of Dramatic Arts. He made his first theatre appearance in the chorus line of an off-Broadway musical called Pitter Patter. Another dancer in the chorus line was a fellow Irish New Yorker named James Cagney. The two men became lifelong friends. His big break in the theatre came in 1928 when he replaced Spencer Tracy for three weeks in the prison drama The Last Mile.

Jenkins went to Hollywood at the invitation of Darryl F. Zanuck and appeared in the film version of the play “A Blessed Event”, playing the character Frankie Wells; the role he had originated in the play. He worked for Paramount Pictures at first, but spent the better part of his career at Warner Bros. He made a career out of playing cops, crooks, comic henchman, taxi drivers, and other not-too-sharp tough guys. He worked with his friend Cagney on two pictures: Jimmy the Gent (1934) and The Irish in Us (1935). As well as Cagney, Jenkins worked alongside many of Hollywood’s biggest stars in many big pictures, such as: Grand Hotel (1932); I Am a Fugitive From a Chain Gang (1932); 42nd Street (1933); Dead End (1937); Destry Rides Again (1939); and The Senator Was Indiscreet (1947), to name but a few. His costars included not only James Cagney but Humphrey Bogart, Olivia DeHavilland, Pat O’Brien, Edward G. Robinson, Greta Garbo, Doris Day, and Rock Hudson, as well as a host of other Hollywood alumni. He worked with the “kids” from Dead End again in Crazy Over Horses (1951), in their permutation from The Dead End Kids to The Bowery Boys.

His talent was such that he was labeled the “greatest scene-stealer of the 1930s” by The New York Times. Just watching him work will prove beyond a doubt that he was, indeed, a marvelous scene stealer. Along with his film and theatre career, Allen Jenkins worked on television. He appeared in many of the popular TV shows of the 1950s, 1960s, and early 1970s. He was a regular on the show Hey, Jeannie! (1956-57) and a semi-regular, appearing as Mugsy, on The Red Skelton Show (1955-75). His talent can also be appreciated in The Abbott and Costello Show; The Ernie Kovacs Show; Your Show of Shows; Batman; The Man From U.N.C.L.E.; The Real McCoys; Wagon Train; and Bewitched. In the Hanna-Barbera animated cartoon series Top Cat (1961-62), he voiced the character of Officer Charlie Dibble. Officer Dibble was the comic foil to Top Cat, voiced by Arnold Stang. Top Cat—or T.C., as his pals called him—was the leader of a gang of Manhattan alley cats. The character was loosely based on Phil Silvers’ con artist Sgt. Bilko character. Top Cat never meant any harm as he watched out for the well-being of his friends. While Officer Dibble had a duty to uphold the law, he was not often unsympathetic to the schemes of Top Cat and his pals.

Allen Jenkins’ final film role was in the Billy Wilder film The Front Page (1974). He had also appeared in the Broadway production of “The Front Page”, in 1928. So it could be said that his career had come full circle. Like many other actors of his generation, Jenkins was an alcoholic. He went public with his alcoholism and was the first actor to speak on the subject to the U.S. House of Representatives and the Senate. He was also instrumental in starting up many Alcoholics Anonymous programs.