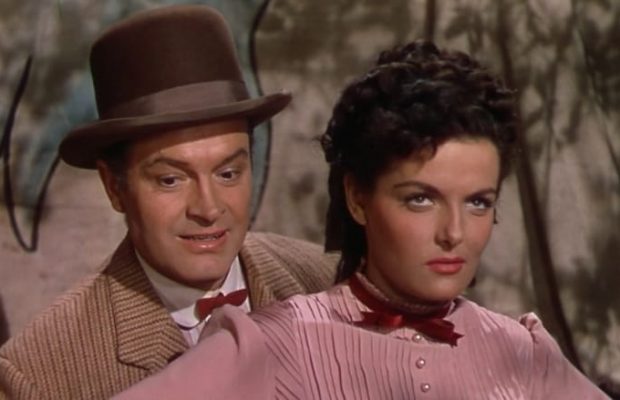 Toronto Film Society presented The Paleface (1948) on Monday, October 21, 1988 in a double bill with For the Love of Mary as part of the Season 41 Monday Evening Film Buffs Series “D”, Programme 2.

The combination of lavish Technicolor, the humor of Bob Hope and Jane Russell, and a delightful musical score written mainly by Livingston and Evans and orchestrated by Victor Young, including an Oscar-winning song, made this film one of the most enjoyable in the long string of Bob Hope performances on film.

Hope is an itinerant, chicken-livered dentist who has come from the East to the “Indian Country” of the old Wild West.  Hope bumbles from one predicament to another, and is constantly bailed out by “Calamity Jane” (Russell), a whiz with the “shootin’ irons”,  as she works as a Government agent.  The shooting prowess of “Painless” Peter Potter, thanks to Calamity, establishes him as a living legend, who many of the local gunslingers would much more appreciate as a dead legend.

The reviews of the time reflect the feelings which have not changed to this day regarding Hope, and similar to many other comedians…you either like it or hate it, there is just no in-between.

The New York Times doubts The Paleface will go down as a memorable item of 1948 culture, and terms it a “second-string” ‘Road’ show at best, without the presence ofBing Crosby and Dorothy Lamour.  And, the reviewer was no less harsh on Jane Russell, who had just come out of the controversy of her performance in The Outlaw.  Says The Times:  Miss Russell, while blessed by nature with certain well-advertised charms, appears to be lacking completely a modest ability to act.  And, while that is not very serious so far as fan favor is concerned, it does limit somewhat the deference which Miss Russell might hope to command.” 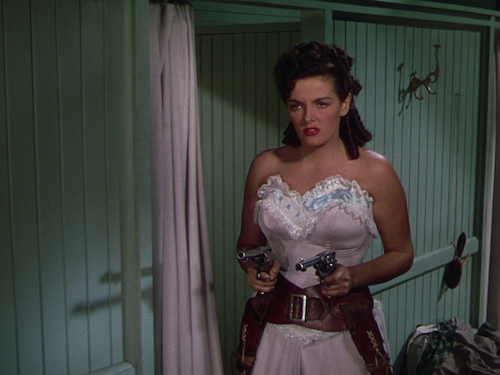 Variety, on the other hand, finds the film “a smart-aleck travesty on the West, told with considerable humour and bright gags.  It sees Bob Hope turned loose with a good script, (who) hams his way through with sock results, backed with high-gear action and (good color photography).”

Variety says that Jane Russell “makes an able sparring partner for the Hope antics, and a sharp eyeful in Technicolor.”

There is agreement, however, from the two sources on the song which won the musical Oscar for the year, “Buttons and Bows”.  Bosley Crowther in the New York Times, terms the song “sensational”, and one of the all-time, all-time hits.  It’s noted that the song is casually tossed off by Hope twiddling a concertina, and appears only once in the entire film, showing the surprise which the Paramount brass must have felt when the Oscar envelopes were opened.  Iris Adrian chirps in with a couple of good numbers as the saloon chanteuse.

The film work of Bob Hope is only a part of his multi-faceted entertainment career which began in 1929.  His film career stretched well over 30 years, and his best work was centred mainly in the first ten years before the camera.  He was one of the last survivors of radio (along with George Burns), who was perhaps marginally more popular and slightly less esteemed than his peers, Jack Benny and Fred Allen.  His television appearances have always drawn high ratings, and his hundreds of trips all over the world to entertain troops, often very close to the battle lines, have become legendary.  He was one of the perennial M.C.’s of the Academy Awards presentations, and a favourite at the White House.  The men behind the man are a legend, too, comprising a team of script-writers virtually unsurpassed.  And his off-stage image remained a good one as well.  Hope was born in Eltham in S.E. London in 1903, the fifth of seven sons.  His father was a stone mason and moved the family to Cleveland when Hope was four years old.  Hope was first reviewed as a vaudeville “new act” in Variety in 1929.  His first Broadway show was a vaudevillian in “Ballyhoo”.  He made his first mark on Broadway in “Roberta” in 1933.  In 1934 he married nigthclub singer Delores Reade and began one of the longest and happiest marriages in show business history.

Hope made some early short comedies, which are still available, but said he had no real interest in films.  However, he increased his screen work throughout the 1930s.  But it was in 1940, teamed with Crosby and Lamour in Road to Singapore that his real motion picture star soared (although he had been well-received a year earlier in The Cat and the Canary).

The dollar signs continued to rise on the “Road” pictures (as did the ticket prices), but grosses anywhere from one to almost five million were not uncommon.  The Paleface was his biggest non-Crosby movie hit.  On the strength of the film, he overtook Crosby and everybody else, and was voted the top motion picture draw in 1949.  At that time, he was receiving $150,000 per film.  And the list of hits continued through the 1950s with films such as Fancy Pants, My Favorite Spy, Son of Paleface and Road to Bali.  The films, and their popularity, declined late in that decade, and Hope began to produce his own films.  However, as the years went by, the quality continued to decline.

In 1972, Show Magazine estimated that Hope was the wealthiest man in show business, with assets of between $400 million and $700 million, mostly due to shrewd investments in real estate.  Since 1954, it is said that he had never earned less than $1 million a year.  His old nemesis was second on the list, with Bing Crosby’s worth estimated at $200 million to $400 million.  The fans have laughed, and so has Bob Hope laughed…all the way to the bank!