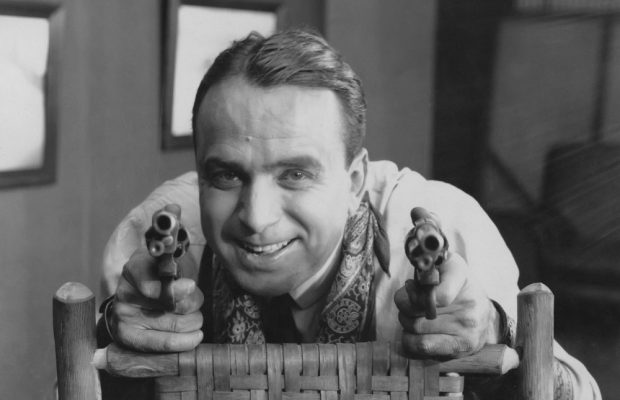 Toronto Film Society presented Wild and Woolly (1919) on Monday, January 23, 1956 in a double bill with When the Clouds Roll By (1919) as part of the Season 8 Monday Evening Silent Film Series, Programme 3.

Tonight we are showing two of the light comedies which originally made Douglas Fairbanks popular before he embarked on the series of costume-adventure films with which he seems most associated today.

The Fairbanks-Loos-Emerson satires ridiculed reigning American fads with a sophistication unknown on the screen before.

Lewis Jacobs in Rise of the American Film

A satire on Westerns but, as a particular statement of Fairbanks’ humor it is also a generous ribbing of his won beliefs.

When the Clouds Roll By (USA 1919)  Produced by United Artists.  Directed by Victor Fleming.  With Kathleen Clifford and Ralph Lewis.

A skit on “psycho-analysis”, a new word then; technically one of his most inventive films.  The slow=motion chase is about the best gymnastic section of all the early comedies.

Fairbanks was the “self-made man”, unbeatable and undismayed.  Quick intelligence and indefatigable energy always won him success–he took his place as a leading legendary character in screen mythology, symbolic of an era.

His early films were good cinema, invigorating and stimulating–neither an artist nor an actor in the accepted understanding of the terms, but a pure product of the film medium–by reason of his rhythm, graceful motion and perpetual movement, and ever-present sense of pantomime.  In order to appreciate the full meaning of Fairbanks, it is necessary to return to his earlier work, where his own movement and grace ran ——————————- sense of enthusiasm, good spirits, adventure and chivalry.