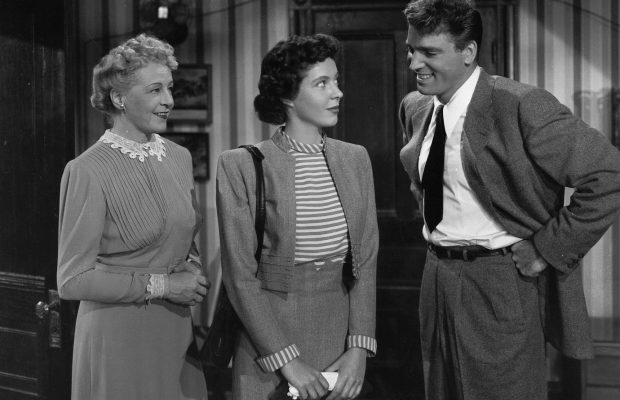 Toronto Film Society presented All My Sons (1948) on Sunday, September 18, 1988 in a double bill with The Long Voyage Home as part of the Season 41 Sunday Afternoon Film Buffs Series “A”, Programme 1.

In the light of the Congressional investigation of Hollywood, exposing as it did, among other things, the desperate caution of the higher echelons controlling films, it is not surprising that the stae play, “All My Sons,” should have undergone a major alteration i its transfer to the screen.  The play, as we understand it, made the sharp and unmistakable point that there is something horribly rotten about a system which permits huge profits to be made out of war.  And in showing the ultimate comeuppance of a man who made a personal pile by selling defective materials to the Air Forces, through the failure of which young fliers died, it clearly indicated that the individual was not alone to blame, but also the whole social structure which tolerates and even encourages private greed.  But that is a rather forward idea and, extended a bit, it might suggest that there are faults in the capitalist system–which, of course, would be downright treasonable.  So, in putting together the screenplay, Chester Erskine, very carefully left out–no doubt, on higher instructions–any such general hints and confined the drama’s indictment to the greed and narrow-mindedness of one man. 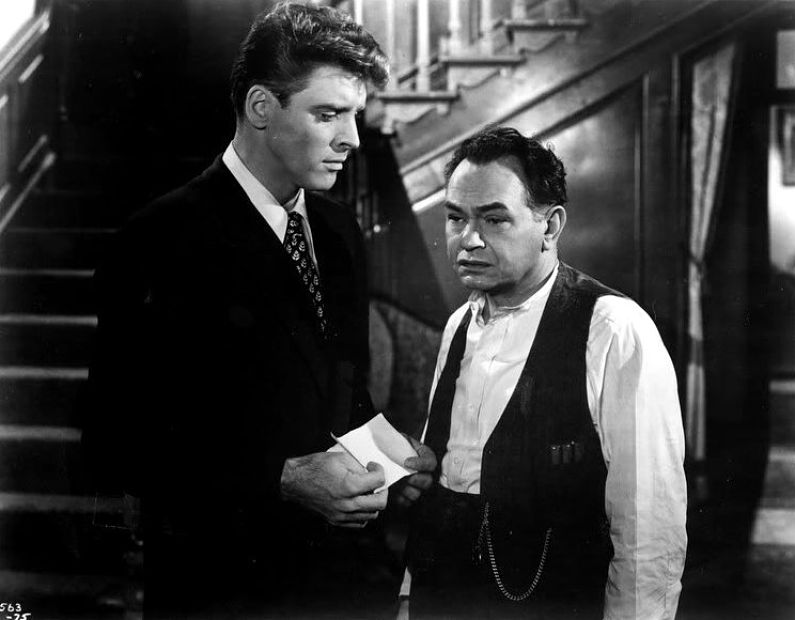 On that restricted level, the film still lands a fairly staggering right-hook on the jaw of the genus profiteer.  And, through a fine performance by Edward G. Robinson, it certainly reveals a character.  For dramatically it tells a story, in restrained but intense emotional terms, of a man who is discovered by his own son to have been a deliberate dealer in faulty war goods–a man who can’t understand the frightfulness of his social irresponsibility, who thinks that so long as he “did it for the family” and got away with it, everything is okay.  In the role of the rugged individualist, Mr. Robinson does a superior job of showing the shades of personality in a little tough guy who has a softer side.  Arrogant, ruthless and dynamic in those moments when his “business” is at stake, he is also tender and considerate in the presence of those he loves.  Clearly he reveals the blank bewilderment of a man who can’t conceive in the abstract the basic moral obligation of the individual to society.  He approaches the character sympathetically.  His Keller is not a villain–that’s not, after all, the way the character sees himself–but a decent man corrupted by superficial values.  Preoccupied with making money as an end in itself, he’s a well-meaning man gone wrong.  A stubborn fighter who celebrates the Protestant ethic of hard work, he doesn’t yield until he’s forced to face his responsibility for his son’s death.  That moment of recognition when he sees, perhaps for the first time, exactly what his values have made him, is Robinson’s finest movie moment.  As he climbs up the stairs, the lifeblood drained from him, Robinson is moving and human in a way that movies had never let him be before.  Robinson wasn’t always the best judge of his own work.  He “hastened to finish” Scarlet Street, in which he had one of his richest roles, because he thought that both he and the story were monotonous.  For once in All My Sons, he was playing a role close to home.  Miller’s drama wasn’t about a gang boss, but about a middle-class family man.  Robinson identified with Joe Keller in a way he could not identify with all the Little Caesars of the past.  An anguished family man in real life, with an estranged, mentally ill wife and a heavily drinking son, he was seldom given the opportunity to play strong domestic drama on screen.  In his autobiography, “All My Yesterdays”, Robinson recalls: “So back to work–in a picture of which I am inordinately proud: All My Sons, from the play by the great Arthur Miller.  It was a part I played with such passion and intensity that the director, Irving Reis, told me constantly to take it easy.  He also called me One-Take Eddie because rarely did I ever have to repeat a scene.  And my passion imbued the whole cast.  No need to imbue Mady Christians, a superb actress.  No need either to imbue Burt Lancaster, playing in perhaps his second or third film but showing that animal vitality and suppressed volcano inside that inevitably made him a star.”

As the right-thinking son of this corrupt man, Burt Lancaster is surprisingly good and, although he appears a bit dim-witted at times, that is not implausible.  Although All My Sons was not successful at the box office, Lancaster did not consider this important, stressing that at least an attempt was made to say something important within the framework of entertainment.  This was Hollywood’s first indication that Lancaster was a political person and that he would, unlike many in his position, take a definite stand on issues and causes in which he believed.  Looking back on the role of Chris Keller, he noted: “I wanted to play him because he had the courage to make his father realize that he was just as responsible for the deaths of many servicemen as if he had murdered them.  And, as I had been in the army, I had no difficulty in duplicating Chris’ feelings.  I believe that each person shares a responsibility for the welfare of others.”

Louisa Horton is natural as his sweetheart and Mady Christians plays the mother intensely.  Howard Duff points up his role as the son of Robinsons’ betrayed partner, Frank Conroy.  Mr. Conroy makes a brief prison scene stand out.  Irving Reis’ direction is slightly stilted in some scenes but generally matches the tempo of a fluid script.  Leith Stevens’ score combines sound effects with musical theme for highly effective backing of the drama.