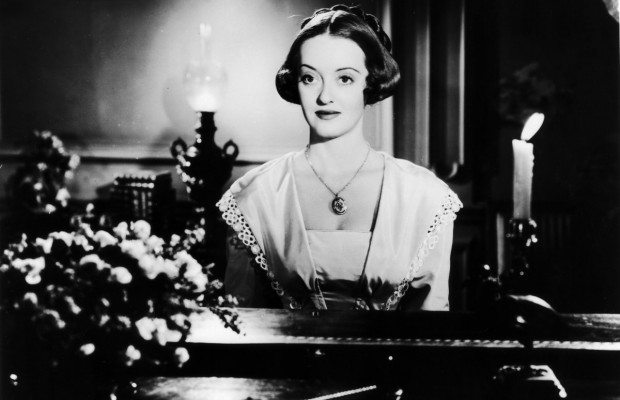 Toronto Film Society presented All This and Heaven Too (1940) on Monday, October 29, 1979 in a double bill with Cabin in the Cotton as part of the Season 32 Monday Evening Film Buff Series, Programme 2.

“I came into your house, my dear friend, and in your unhappiness, you reached out your hand for help, and in my loneliness, I took it.  We have such a friendship that is given to very few.” – Bette Davis as Henriette Deluzy Desportes

This plot of All This And Heaven Too, a best selling novel by Rachel Field, deals with the employment of Henriette Deluzy Desportes as a governess, and the murder of the Duchessse de Praslin by her husband.  Rachel Field based her book on the fact that Henriette was innocent of any blame in the murder of the Duchesse–or any actual affair with the Duc.  She had access to the court records of the trial, which convinced her of this fact.  The opposing opinion was a book L’Affaire Henriette by the Marquis de Sade.  Miss Field gleaned her material not only f rom the records of the trial but also from the stories she heard of her great-aunt Henriette and Henriette’s husband, Henry Field.  These stories, even more than the trial records, convinced her that Henriette was never, by any actual deed or act, involved in the murder of the Duchesse de Praslin.

Life magazine (July 1, 1940), was interested in the background of the lady who was the most notorious woman in Europe in 1847: …to Victor Hugo she appeared “a rare woman…at once wicked and charming.”  To the London Times, she served as a text against the corruption of Parisian royalist society.  Partly because of her a nation revolted and brushed a king from his throne.  In the annuals of crime she is coupled with a murder as gruesome and enigmatic as the Lizzie Borden case (1893), the Halls-Mills case (1922) or the Gray-Snider case (1927)…  At daybreak on August 18, 1847, the Duchesse de Praslin was found hacked to pieces in her bedroom.  Henriette Desportes was arrested as an accomplice, thrown into prison, reviled as a siren.  The Duc’s suicide further enraged the populace against Louis Phillippe’s regime.  Though Henriette won her acquittal in court, she watched during the following February the abdication of a king and the revolt of the people on the barricaded boulevards of Paris.

Casey Robinson’s screenplay drew as heavily on actual accounts of the murder as it did on Field’s novel.  He made use of flashbacks, creating a prologue and an epilogue.  Miss Field was very happy with the result.  She stated: ‘You won’t know your book,’ people told me.  ‘Be prepared for the worst,’ which may be the reason why I was rewarded with a happy surprise!  Bette Davis and Rachel Field became good friends and remained so up to the author’s death.

The budget for the picture was set at $1.37 million and listed about $1,000 each for the 35 costumes designed for Miss Davis by Orry-Kelly.  Art director Weyl designed 65 exterior shots and 35 interiors, the majority of which were contained in the Duc’s mansion at 55 Rue de Faubourg Saint-Honore in Paris.  Other interiors were located in the Louis Phillippe palace, a wine shop, and an attic bedroom.  Exteriors included a cobblestoned street, a prison courtyard, and the de Praslin Chateau at Melun with miles of staircases.  The Duc’s bedroom featured padded gold damask walls with deep crimson panels, while the Duchesses pink satin bedroom included a gold-leaf bed with hand-embroidered satin panels on head and foot.  Weyl searched Southern California museums for authentic antiques of the Louis Phillippe period, gathering some 12,000 separate items, from rare harpsichords to half-ton chandeliers.

Bette Davis was thrilled to be working with Charles Boyer and their personalities work together beautifully.  Miss Davis states: “Henriette was an extremely difficult part…her calm, her understatement in everything she said and did was a challenge to me as an actress.  Without the smouldering passion portrayed by Boyer as le Duc, this could have been a very dull relationship with Henriette.”  The one false note is the glamorous portrayal of the Duchesse.  Apparently, Barbara O’Neil in the test of the part, portrayed her as she was written in the book and script–a frowzy, unkempt, utterly unattractive woman.  It was a remarkable test.  However, the director, in true Hollywood fashion, insisted she be the opposite in appearance for the film, and no amount of urging by both Miss O’Neill and Miss Davis would change his mind.  It probably not only robbed the actress of a far more interesting and perhaps greater performance, but it also made the Duc’s hatred of his wife less plausible and gained him less sympathy from the viewer.

However, due to its meticulous production and the skill and authority of its performances, All This And Heaven Too is as rewarding today as it was nearly four decades ago and fully deserved its Academy Award nomination among the best films of 1940.

Sources:  Mother Goddam, by Whitney Stine and The Lonely Life by Bette Davis