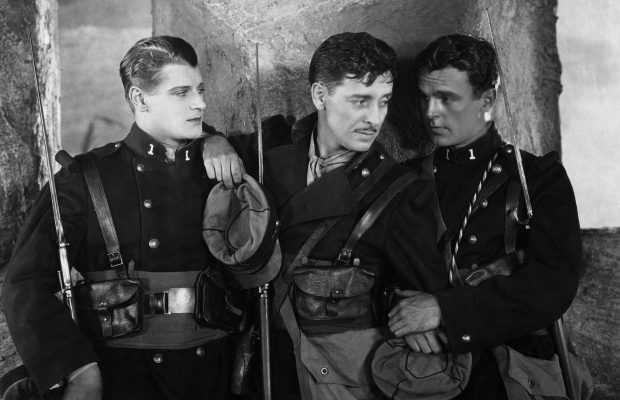 There is not much in the Learned Journals of Film about Beau Geste or its director, many authorities mentioning neither.  Lewis Jacobs in The Rise of the American Film says briefly: “A ‘big’ director, Brenon always just fell short of great stature, but was commercially extgremely successful.  One of the few directors of the 1914-1918 period to maintain a top-ranking position in later years, during which his outstanding successes were Beau Geste (1926) and Sorrell and Son (1927).  Selected as one of the ten best directors of 1926, 27 and 28.  Since sound he has been eclipsed by others.”  Paul Rotha in The Film Till Now rather coolly credits him with “a continuous flow of movies, mostly of the mock-sentimental kind.  Brenon principally lacks imagination.  His sense of pictorial values is sound but his cinematic interpretation is negligible.”  He does refer to “that very successful, popular film Beau Geste, the forerunner of many similar pictures”.

Starting as a maker of lavish spectacles such as Neptune’s Daughter and Daughter of the Gods (starring Annette Kellermann, the swimming champion), The Fall of the Romanoffs and War Brides (a pacifist theme featuring Alla Nazimova), Herbert Brenon in the 20’s developed into one of the more reliable purveyors of superior entertainment films.  It is true that he never made a great picture, and that his style did not run to showy “cinematics” along the lines of quick-cutting or moving-camera effects; yet he was an unobtrusively able craftsman and in many ways a director of taste and discrimination, who usually told an interesting story and showed respect for the content and spirit of books or plays that he filmed–not always the rule in this period!  He had an especial aptitude for conveying English atmosphere and character (of a “genteel” sort, admittedly!) and notably preserved Sir James Barrie’s fragile charm in delightful screen versions of Peter Pan and A Kiss for Cinderella.  He handled players extremely well (e.g. the young newcomer Betty Bronson in the Barrie films).  He directed the famed character actor Ernest Torrence in his first starring role, The Sideshow of Life; he made an unusual film about professional beggars, The Street of Forgotten Men; he filmed Anne Douglas Sedgwick’s The Little French Girl; he did a very interesting silent version of F. Scott Fitzgerald’s The Great Gatsby; drew from H.B. Warner the performance of his career in Sorrell and Son; and made a beautiful and sensitive screen adaptation of Joseph Conrad’s The Rescue, with Ronald Colman.  Before dropping out of films he did make two worthy talkies–Lummox, from a Fannie Hurst novel,, and Arnold Zweig’s The Case of Sergeant Grischa.

Beau Geste is the archetype of the Foreign Legion movie, a carefully produced, enjoyable adventure yarn with an intriguing element of mystery.  Melodrama and sentiment are handled with discretion and, at times, with an engaging sense of humor.  When first released the film was “road-shown” with a two-a-day performances and a full orchestral score.  We’re sorry we can’t let you hear the lively Foreign Legion marches and bugle calls, etc., but the film itself is the complete version as shown then, and we are breaking for an intermission at the same point as did the original “roadshow”.

Beau Geste was remade as a talkie in 1939–an inferior version with inappropriate American accents and a director–William Wellman–whose talents lay in more realistic fields.  (Incidentally, in that version, the rascally Boldoni and the brutal Lejaune were made Russians!)