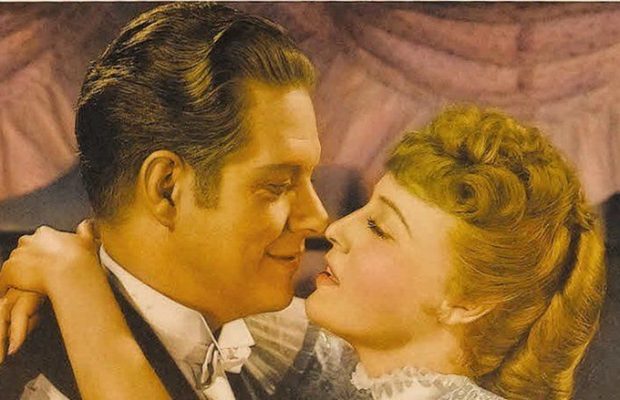 Toronto Film Society presented Bitter Sweet (1940) on Sunday, December 2, 1984 in a double bill with If I Had a Million as part of the Season 37 Sunday Afternoon Film Buffs Series “A”, Programme 5. 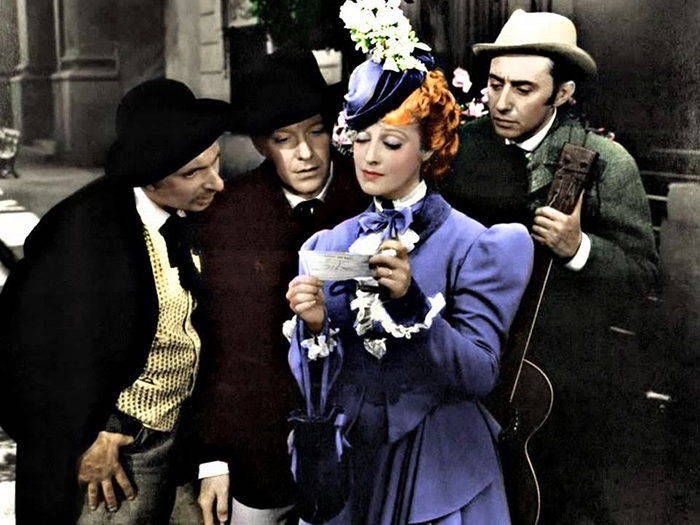 December brings us that much closer to the traditional Christmas season, and the “Land of Fantasy” that is created in the minds of the young.  Maybe this is our Christmas visit to the land of “movie fantasy”.

For that, certainly is the story of Bitter Sweet, described by Variety as “a super-elaborate production in Technicolor, providing a visual-appeal background for mounting of the fetching Noel Coward songs…delivered in solo and duet by Jeanette MacDonald and Nelson Eddy.”

It is said that Coward wept when he saw the film, not because he was so moved, but because he thought it was dreadful.  He believed what had been written as an ironic and tender operetta had been vulgarized by being turned into just another vehicle for MacDonald and Eddy.  (This version is a re-make of the 1933 British adaptation of the material, which starred Anna Neagle.)  The 1940 Bitter Sweet is a typical presentation of its stars, made lavish in the typical MGM manner, and retaining several of the Coward songs, including an exquisitely staged Ziegeuner finale.  Variety‘s “yes and no” review called it “chiefly eye and ear entertainment”, but a “musical treat” for both music lovers and MacDonald-Eddy adherents.

The plot is straight ahead, with Eddy (not quite looking like an almost down and out music teacher), eloping with his pupil (with MacDonald looking more like the attractive lady of 38 that she was, than an English lass of 18).  They head for Vienna while he writes his operetta, leading to the intervention of fate just as the work is to be completed.  The original release of the film made lavish use of the new Technicolor process…then a switch to tint photography for the finale.  The supporting cast is well put together, with George Sanders his always-perfect “nasty”, complete to clicking heels and snapped salute.

The love scenes, which had been so essential to the warmth of the stage production, tend to be rather cold in the film.  However, there are quick bits and pieces of quiet humour that are spotted (the greeting scene in the Vienna railway station for example).  If imitation is, in truth, only a form of flattery, then there are no two stars of the screen who should feel more flattered than Jeanette MacDonald and Nelson Eddy.  The take-offs on this duo, usually centered around the Royal Canadian Mounted Police Rose Marie film could never be counted.  It seems there are three areas in which the RCMP force has received publicity which it would be just as happy to do without…Dudley Doright…Sgt. Preston…and MacDonald and Eddy…and I’m sure the latter tops the list.  The imitation continued “on-screen” as well, with teamings including Irene Dunne and Allan Jones, to Howard Keel and Kathryn Grayson.

Jeanette MacDonald (1902-1965) was born in Philadelphia, and began her career in the chorus in New York.  She was in some ways a “fading lady”, when teamed with the unknown Eddy.  She had teamed with Maurice Chevalier in a well-received earlier set of musicals.  Then, after a popularity dip, and a few less than successful films, came the Ernst Lubitsch production of The Merry Widow in 1934, and the cycle began again.  In the next few years, the two showed up all over the map–literally from Broadway to heaven.  The last appearance with Eddy was in the 1942 production I Married an Angel (again directed by Van Dyke), which received luke-warm reception at best.

Bitter Sweet won two Oscar nominations in 1940, including one for the colour photography.