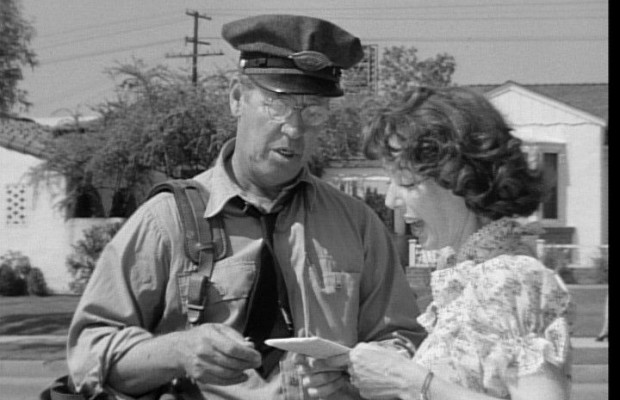 Toronto Film Society presented Cause for Alarm! on Monday, March 31, 2014 in a double bill with Nobody Lives Forever as part of the Season 66 Monday Night Film Buff Series, Programme 7.

Invalid George Jones mistakenly believes that his wife Ellen is having an affair with their doctor and old friend Ranny Grahame., and that they are planning to murder him. He writes a letter to his lawyer claiming that this is the case and asks Ellen to give it to the postman, which she does, after which he tells her what the content of the letter is and threatens her with a

gun, but suddenly drops dead from a heart attack. The remainder of the film deals with her frantic attempts to retrieve the letter before it reaches its destination and to dispose of George’s gun in case it might incriminate her in his death.

Though it was well reviewed, the film did poorly at the box office and was quickly forgotten, though recent reassessments have been more favourable. On its initial release, Bosley Crowther of the New York Times wrote: “Here a simple situation is turned into a thoroughly chilling business by highlighting the most humdrum staples of the everyday American scene…The suspense, under Director Tay Garnett, mounts steadily, almost unbearably, until a final plot twist so original that it’s almost a swindle.” He added praise for Loretta Young: “she does splendidly as the desperate housewife, avoiding all the pitfalls, even in her hysterical breakdown at the end.”

The reviewer for Time called the film “the year’s first thriller with an honest quota of thrills. It pulls off the old Hitchcock trick of giving commonplace people, events and settings a sinister meaning, and it develops its simple, one-track idea with frightening logic.”

The young François Truffaut, at the beginning of his career as a film critic wrote: “But all these effects hit home, perfectly timed, and isn’t that what counts?”

Born Gretchen Young in Salt Lake City, she and her mother and sisters moved to Hollywood when she was two years. She became a child actress at the age of three and was co-starred with Lon Chaney in Laugh, Clown, Laugh in 1917, though the progress of her career was interrupted by a convent education. Her first name was changed to Loretta by the actress

Colleen Moore and she began to attract serious attention in the early 1903s with roles in Platinum Blonde, Man’s Castle, and Zoo in Budapest (all 1933). Her career reached its peak in the 1940s with films like The Bishop’s Wife, and The Farmer’s Daughter (for which she won an Oscar), but it began to lose momentum in the 1950s and she made a switch to television in 1954 as hostess of The Loretta Young Show, which ran till 1961. After another less successful TV show she retired from performing till the 1980s, when she appeared in two NBC TV movies.

She was married three times, the second time to Thomas Lewis, producer/writer of Cause For Alarm! and had an affair with Clark Gable while working with him on The Call of the Wild in 1935, that resulted in a pregnancy which both made strenuous efforts to cover up, leading her to claim that she had adopted the child that resulted, and admitting the truth only many years later in 1999. She was a lifelong Republican and an active member of the Hollywood Republican Committee, as well as being closely involved. in church and charitable activities.

Born in New York City, he enjoyed a lengthy and prolific career on Broadway and in film and television, originating apparently in his attracting attention for his height and good looks. He began on Broadway, where he had initial success, but moved into movies in the late 1930s. He was never a major star, but was a reliable character actor and supporting lead. Some of

A prolific and skilful director of action films of all kinds, he began his film career as a screenwriter in 1920 and then a director from 1928. His films, which consistently display narrative verve and technical skill, include One Way Passage (1932), China Seas (1935), Slave Ship (1937), Seven Sinners (1940) and, the one for which he is probably best known, The Postman Always Rings Twice (1946), with John Garfield and Lana Turner.