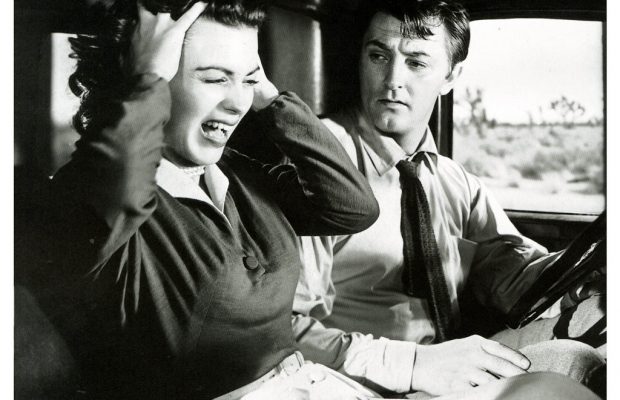 Toronto Film Society presented Where Danger Lives (1950) on Monday, July 10, 2017 in a double bill with Too Late For Tears as part of the Season 70 Summer Series, Programme 1.

When I first saw tonight’s film, I had recently read Mia Farrow’s Memoir, What Falls Away.  What struck me was that there is an early scene where Dr. Jeff Cameron (played by Robert Mitchum) is caring for a child in an iron lung.  I thought that as John Farrow was the director, he had purposely put that scene in because his daughter, Mia, had contracted Polio when she was nine and during her time in the hospital, had to use an iron lung for her cure.  However, that occurred in 1954, four years after Where Danger Lives was made, so I’m going to go with “foreshadowing” instead.

In Lee Server’s biography of Robert Mitchum, Baby I Don’t Care, he writes:

After a brief respite for the Christmas season, Mitchum was back before the cameras in January 1950, shooting Where Danger Lives with another Hughes-tested actress, Faith Domergue.  Craftily weaned away from her parents by the millionaire, the big-eyed, sultry brunette youngster had lived with Hughes from the time she was fifteen, ostensibly being readied for silver screen stardom.  After long years of nurturing, Domergue took the lead in Hugh’s expensive, avenging-Corsican disaster, Vendetta, still unreleased five years after the production had wrapped.  By default, Domergue would make her official cinematic debut in a comparatively modest and altogether superior film, one of the darkest and most unrelenting examples of the film noir genre, which you get to see tonight.

For Mitchum, the role of Dr. Jeff Cameron was a kind of surreal amplification of Out of the Past’s Jeff Baily, another corruptible man passively accepting his own destruction.  The quality of a nightmare was expertly achieved by director John Farrow’s harsh staging and the bleak, shrouded images caught by noir’s king cameraman Nicholas Musuraca— as the actor said, another Mitchum picture “lit by matches.”

John Farrow was the only director Bob had ever met who could outdrink him.  The good-looking, blond, former Australian seaman (he’d entered the United States by jumping ship from a windjammer) and father of future Mitchum costar Mia (they played together in 1968s Secret Ceremony), Farrow was known as a mean, ruthless son of a gun, let us say, by everyone who knew him, except for the coteries of Roman Catholic priests with whom he spent much time in pious and arcane discussions of Church doctrine and ecumenical history.  Mitchum, like everyone else, had a difficult time equating the roistering philanderer he knew with the man who wrote devotional biographies of the saints and of Father Damien, known as  “the leper priest.”

“He was a professional Catholic, Farrow,” said Mitchum’s secretary, Reva Frederick.  “Always surrounded by nuns and priests.  But his private life was entirely different.  He cast the extras—the women—almost entirely with the ones he wanted for his own amusement, girls he would make at his command.”  Mitchum enjoyed Farrow’s company in a bar, but at work he could be unbearable, pinching every female’s behind (he caddishly gave his wife, Maureen O’Sullivan, an unbilled cameo as an “understanding” girlfriend) and revealing a sadistic streak when it came to putting the actor through his paces.  In a scene in a sleazy Bordertown hotel, the injured, barely conscious Mitchum character is required to crawl out of his room and then slide and tumble down three flights of stairs.  Farrow demanded they shoot it without a stuntman, with the camera on a descending crane following Mitchum’s fall.  The hastily constructed staircase set was open at the sides, and when Mitchum started tumbling he nearly slipped over, just avoiding a thirty-foot drop to the wooden plank floor.  Film producer Sid Rogell happened to come onto the set as the take began and ran screaming at Farrow’s throat saying “You goddamn idiot!  Are you trying to kill him?”  Carpenters put in a railing, and Farrow restaged the shot to minimize the risk to the performer.  Rogell wanted them to use a stuntman.  Mitchum refused—he wasn’t going to have Farrow calling him a “fairy” for the rest of the shoot.  Down he tumbled.  But when the director blithely called, “All right, let’s try it again,” Mitchum told him where he could go! From its opening scene of a doctor telling a bedtime story to a little girl in an iron lung, Where Danger Lives never quite plays by the established rules of film-noir. While it relates the essential drama of wife-coaxes-lover-to-murder-husband, John Farrow’s terse thriller freshens the formula with clever flourishes that make it one of the more memorable cases of cinematic parricide.

Instead of an ordinary insurance salesman, mechanic, or detective, Jeff Cameron is a gifted surgeon, and his temptress, Margo Lannington, is not merely diabolical but certifiably, medically insane. Unfortunately, the deed is done before Mr. Lannington can share this crucial fact with his wife’s would-be lover. The fugitive couple’s turbulent rush to the Mexican border is complicated by outlandish twists of fate more reminiscent of a playful Hitchcock film than a gritty crime thriller. In one bit of inspired irony, the couple is taken into custody during their flight not because of the widespread police bulletins, but because Cameron doesn’t have enough whiskers on his face (during a small town “Pioneer Days” celebration). This spirit of orchestrated suspense is, no doubt, the contribution of screenwriter Charles Bennett, who also penned the scripts for Hitchcock’s The Man Who Knew Too Much (1934), The Thirty-Nine Steps (1935), and Foreign Correspondent (1940).

Mitchum’s trademark as an actor was his lazy nonchalance, maintaining an easy coolness even in the midst of emotional turmoil. In Where Danger Lives, this quality is played to a delicious extreme, as Dr. Cameron has a few too many Polynesian cocktails in one scene, takes a beating with a fireplace poker in another, and spends the remainder of the film growing increasingly weary. By film’s end, Mitchum is audaciously performing his most dramatic scenes while lying semi-conscious on the floor (and clearly loving every minute of it).

Faith Domergue did her best to fill the histrionic void as the manipulative, deranged Margo. The actress was the highly touted discovery of RKO head Howard Hughes, who had intended to debut her talents in an extravagant costume drama, Vendetta (1950). But as the film became plagued with complications and creative differences, Hughes wisely opted instead for Where Danger Lives, a film that was more modest in scale, but far superior in delivering the brand of romance and thrills that audiences of 1950 hungered for.