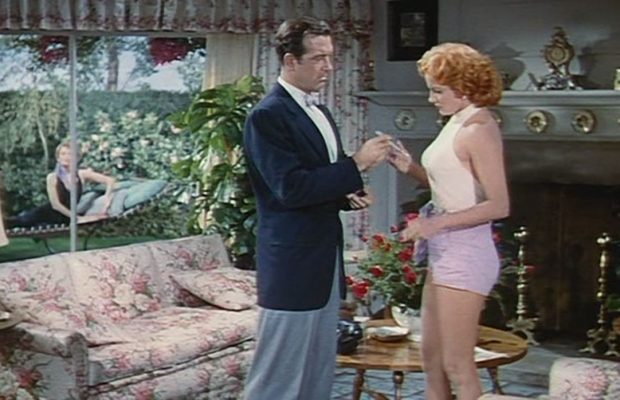 Today’s feature films are a perfect lead-in to Toronto Film Society’s upcoming Summer Series, Dangerous Dames.  And Arlene Dahl’s Dorothy Lyons, to say the least, is a perfect example.  I had first seen this film last June at Cinevent in Columbus, Ohio and afterwards Dahl’s performance was indeed a topic of conversation.  It’s rare that a Noir is filmed in Technicolor, and this film does justice to the equally gorgeous redheaded actresses who play the odd, but devoted sisters, not to mention the home that they live in.

John Payne, who we know as a handsome singer in 1940 musicals and then as a tough guy in the 1950s, is somewhat ambiguous until, well, he isn’t.

When I was down in Boca Raton this past November, a friend and I had lunch with Arlene Dahl. Okay, we didn’t exactly eat with her, but we did attend a luncheon where we did get to meet and speak with her.   Slightly Scarlet was being screened at the Fort Lauderdale International Film Festival and Miss Dahl had been invited as their guest.  After the outdoor luncheon, we were all escorted inside.  Both Arlene and the film were introduced by film historian and author Foster Hirsch and afterwards he interviewed the quick-witted and positive-thinking 91-years-young, Arlene.  She mentioned how she had been tired of getting “boring roles” and when she read this script, originally for the Rhonda Fleming part, she reported back that she wanted to play the role of the “kleptomaniac, nymphomaniac, jailbird—I want to do it all.”  She talked about how people mixed her and Rhonda Fleming up, so for a lark, they would sign each other’s autographs when that occurred.  To this day, she’s still friends and keeps in touch with Rhonda.  When asked about John Payne, she got a laugh when she said he was “well named”.  When asked about Ted de Corsia, she said he was a terrific actor, lots of fun, had a great sense of humour, which unfortunately “the leading man” didn’t have.  She and Hirsch talked about the cinematographer John Alton and how he was able to capture Noir in colour.

They talked about Toronto-born director Allan Dwan, who directed over 400 movies.  Arlene said he was an entertaining person and was a “real” director, didn’t direct like a “traffic cop”.  When asked if she explored her character’s past, she jokingly said that she had “lived Dorothy’s past—and had a ball”, then said that she got to do everything she wished she could have done in the past, and that every woman has that “naughty side” that she’d like to let go once in a while, and through Dorothy, she got to do it.

She talked about a few other films, but mentioned that she played someone of her own background, Norwegian, in the film Journey to the Center of the Earth with James Mason.

Following the interview, there was a meet-and-greet back out in the courtyard, where we all had an opportunity to meet Arlene Dahl one-on-one.  I mentioned to her that I had recently seen a 16mm print of the film and that I had also seen her not too long ago in the 1949 film Scenes of a Crime.  At this, she said, “Oh that role wasn’t that interesting.”  I told her that although her role was certainly more ordinary than this one—she plays Van Johnson’s housewife—I had still enjoyed the film quite a bit.  I also mentioned that Toronto Film Society would be screening this film today, and cheekily asked her if she had any plans to be here in April.  She responded with, “You never know.  I do travel quite a bit.”

Richard M. Roberts wrote in the Cinevent notes that some “film noir ‘experts’ argue as to whether Slightly Scarlet is truly a Noir.  Whatever the heck it is, it is a solid, strange, wild and wacky movie shot in a crackpot canvas of solid,” which incidentally I hope show up in this DVD as well as it did in the Technicolor print they screened at Cinevent, hopefully better than the DVD they used at the Fort Lauderdale Film Festival.  “Though no expert will ever call it a screamin’ bonafide classic, maybe it is indeed unclassifiable because it is truly one-of-a-kind.”

Plot: Ben Grace (John Payne) is the right-hand man of criminal boss Solly Caspar, who is fighting to retain control of Bay City’s criminal underworld and tasks him to dig up dirt on mayoral hopeful Frank Jansen, an honest man who plans to launch an anti-crime campaign. Ben contacts Taylor’s secretary, June Lyons (Rhonda Fleming), and gives her incriminating evidence about Caspar, hoping to take his place as gang leader, thus forcing him to leave town. Sexual complications ensue when June’s jailbird sister, Dorothy, becomes attracted to Ben and enters into competition with June for his dubious affections. Caspar returns, eager for revenge on Ben, and mayhem ensues.

Critical Reception: Irascible New York Times critic Bosley Crowther hated the film and called it “an exhausting lot of twaddle about crime and city politics, an honest mayor, his secretary-mistress, her kleptomaniacal sister, and the fellow who wants to get control of the gang.” French New Wave critic and filmmaker Jean-Luc Godard was kinder, placing it fifth in his Cahiers du cinéma 1956 review of the year, while an American critic emphasised John Alton’s photography, writing that “his imagination in lighting is as distinctive in color as it is in black and white…. He uses extensive shadows and large black areas, and he accentuates an array of pinks, greens, and especially the color orange. The end result is a startling effect in many of the scenes, all in Technicolor.”

Allan Dwan (1885-1981): Director of more than 130 features and nearly 300 silent shorts, over a career that began in 1911 and ended in 1961, Dwan’s prolific output might suggest that he was simply a “journeyman for hire” with no particular concern for the quality of his work. Yet, there are many important nuggets among the dross, and recent critics and historians, such as Kevin Brownlow and Peter Bogdanovich, have done much to rehabilitate his finest work, assisted by–necessarily limited–retrospectives at the Museum of Modern Art in New York and the Cinema Ritrovato festival in Bologna.

Dwan was born in Toronto, into a family involved in commerce who moved to the United States when he was seven years old. He studied engineering at university, but an early interest in film led to a job as scriptwriter for Essanay and work in Hollywood, where he made comedies and Westerns–some of the latter comparable to the early work of John Ford–and directed Mary Pickford and Douglas Fairbanks in several important films, including the 1922 Robin Hood and eight features for Gloria Swanson, who later called him the best director she ever had. Moving smoothly into sound, he made three films starring Shirley Temple, including Rebecca of Sunnybrook Farm, and a string of comedies, such as Brewster’s Millions; Westerns, like Frontier Marshall, Cattle Queen of Montana, and Silver Lode; melodramas and crime films, such as River’s Edge; and his biggest commercial success, Sands of Iwo Jima (1949), which starred John Wayne. His last film, The Most Dangerous Man Alive (1961), was a futuristic political thriller dealing with the dangers of nuclear power.

John Payne (1912-1989): Born in Virginia, his mother was a singer and he studied drama and voice at Columbia University and the Juilliard School. After taking a variety of odd jobs, he found work in the theatre and then Hollywood, where his first role was in Dodsworth (1936). Established as a reliable character actor and singer, he appeared in a variety of roles in the 1940s, followed by tough guy roles in Westerns and crime films, and then moved into extensive work in television. In 1961, he was severely injured in a car accident which left his face permanently scarred–a feature that he and others often used for comic effect in his television appearances.

Rhonda Fleming (born 1923): Born in Hollywood, she worked as an actress while in high school before being discovered by a Hollywood agent. Her first major supporting role was in Alfred Hitchcock’s Spellbound (1945), followed by The Spiral Staircase (1946) and Out of the Past (1947). She starred and sang with Bing Crosby in A Connecticut Yankee in King Arthur’s Court (1949); portrayed Cleopatra in Serpent of the Nile (1953); and appeared opposite John Payne and Ronald Reagan in Tennessee’s Partner (1955). Later films included Fritz Lang’s While the City Sleeps and John Sturges’s Gunfight at the O.K. Corral. She also appeared frequently on television in the 1950s and 1960s.

Arlene Dahl (born 1925): Her mother was involved in amateur dramatics and, as a child, Dahl took elocution and dancing lessons and was involved in local theatre. She began her professional career in 1947 and married actor Lex Barker in 1947, divorcing the following year. She had some success as an actress in the 1950s in such films as Journey to the Centre of the Earth, but appeared more often on television and eventually moved into marketing and designing beauty products.