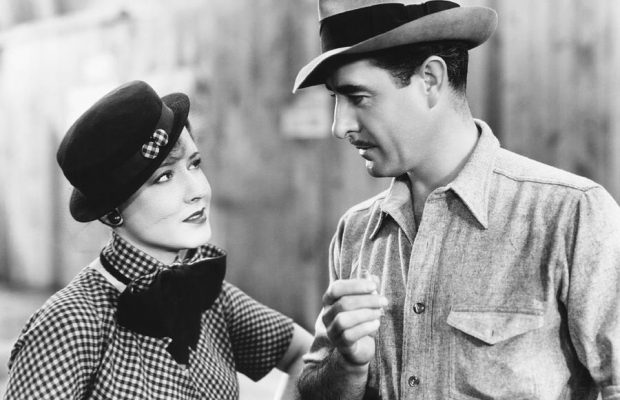 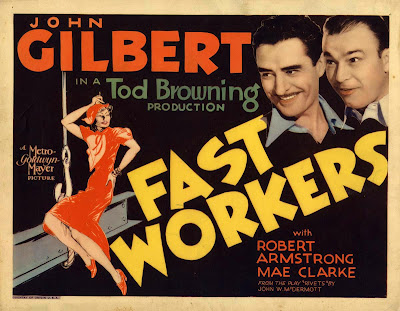 Why show Fast Workers and Laughing Sinners in a double bill, you may have asked yourself?  These two movies are connected in a filmic way that’s fun when you spot it.  So, if you don’t already know what it is, I’ll keep it a secret so that you can enjoy discovering it for yourselves.What these two films do have in common is the fact that they are both pre-Code and even though they were made 85 and 87 years ago respectively, I believe this era of film portrays people in a way that is still very relatable to us today.  Two important facts to remember when watching these early 30s films are that this was the period when people were living during the height of the Great Depression and that from 1920 to the bitter end of 1933, it was the era of Prohibition in the United States.  Especially interesting because, yes sometimes people were depicted as wealthy in pre-Code films, but no matter what, they were always drinking.

Possibly because there was so little opportunity for women to find work during this early period of the 30s, if they weren’t wives, office workers, department store clerks, drudges or showgirls, they were often portrayed, perhaps not always as an obvious prostitute, but certainly as a gold-digger.  Our two heroines, Mae Clarke and Joan Crawford, whether a gold-digger or a showgirl, have a hard time with their love lives—getting the man they each want.  And what makes these men appealing besides their good looks?  It’s that they each have jobs!  I would think, especially during this time period, a man with steady work, and no matter his marital status, was the aphrodisiac of the moment.

Not only is the title of the film Fast Workers an obvious double entendre, but it describes the speed the men, who are riveters, have to work.  It also describes the pacing of the film—so fast that if you don’t pay attention to every word, you may miss the fact that a couple of characters have gotten married and aren’t actually living in sin.

The film is directed by Tod Browning, who also directed John Gilbert in 1927 in the very interesting film The Show about a carnival performer.  This was a theme that Browning revisited in films from time to time because it was what he knew best, having been a carnival performer from his teenage years until he became involved with film through his meeting D.W. Griffith.

The film Tod Browning made prior to Fast Workers was Freaks, and although it’s considered an iconic film today, it was a huge disappointment for the Studio.  People were aghast by it, the studio pulled it from the theatres, losing well over $150,000.  As punishment, Browning was assigned to work with John Gilbert, while making Fast Workers was considered a punishment for both men.  By this time, Gilbert was deep in Louis B. Mayer’s bad books and this would be his last picture under contract for MGM.  Browning as well was very unhappy with the final results of Fast Workers and had his name taken off the picture so, as you will see, they are not included in the credits.

Virginia Cherrill is given noticeable billing.  If her name sounds familiar but you can’t quite place her, she is most well known for her role as the blind girl in Chaplin’s 1931 film City Lights.  She was also Cary Grant’s first wife.  Disappointingly, except for a very short scene at the beginning of the film when John Gilbert is dropped off at his work site, that seems to be the only scene she is in.

What could be the most interesting aspect of the film is the depiction of the working conditions of the riveters when the skyscrapers were being built in New York.  Pretty shocking, eyebrow raising and scary.

A few mentions of some of the other actors in the film: Robert Armstrong, famous for playing the director in King Kong; Mae Clarke, famous for being on the receiving end of James Cagney’s grapefruit in The Public Enemy; and Sterling Holloway, famous as the original voice for the beloved Winnie-the-Pooh.

And last but not least, it must be mentioned that there was nothing wrong with John Gilbert’s voice.  After all, he made ten talkies, including the famous Queen Christina with Garbo.  So it’s quite incredible that the rumour persists even as late as 2004 when mentioned in Marc Eliot’s Cary Grant biography—while our programmer Barry Chapman was just telling me the other day that he heard this point in a recent lecture—that Gilbert’s voice ruined his career.  Far from it, it appears much more likely that it was the conflict John Gilbert had with Louis B. Mayer at MGM that ended his career and Gilbert’s alcoholism that was the cause of his demise in January of 1936 at the age of 39.

And so, with that, I hope you enjoy the film. 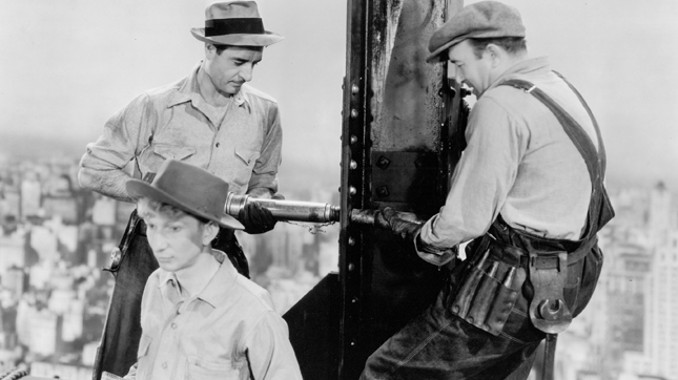 In January [of] 1933, production on Jack’s [(John Gilbert)] last assignment under his MGM contract, Rivets (eventually retitled Fast Workers), was announced. It was produced and directed by Tod Browning—late of The Show—and had dialogue by Laurence Stallings, all of which should have been a great sign. But Browning was perhaps the only man at MGM farther in the doghouse than Jack. After his success at Universal with Dracula (1931), Browning had been hired by [Irving] Thalberg to come up with another box office horror hit for MGM. Instead, Browning came up with Freaks. Now considered a classic of the horror genre, it was a disaster at the time of its release, and the fact that Thalberg oversaw it proved a thorny issue with the prissy Mayer. Freaks was yanked from whatever theatres hadn’t banned it outright, and it lost $164,000 for MGM. Assigning Browning to a John Gilbert film was actually considered a punishment for both men.

Surprisingly for these pre-Code days, Fast Workers still ran into censorship issues. Will Hays ordered Nicholas Schenck to cut a bit where Jack spots two lesbians cuddling at a bar and cracks, “They’re making it tougher for us every day.” “A definite inference of sex perversion, and as such in violation of the Code,” wrote one censor. Even more surprisingly, the line wasn’t touched on first release. An offended Hays wrote Schenck, “The failure of the studio to eliminate this line…was very unfortunate.” MGM finally caved and cut the line for national release, and it is no longer to be heard in the film.

Fast Workers is a cheap, nasty film about cheap, nasty people—but for all that, it is fun and fast moving (at little more than an hour). Though purportedly based on a play by John McDermott, it used the exact same plot as the 1928 silent A Girl in Every Port, which had recently (1931) been remade as Goldie. Indeed, Robert Armstrong reprised his Girl in Every Port role for Fast Workers. The movie concerns two backstabbing, brawling pals—sailors in the earlier films, now New York construction workers—who take great pains to prove that the other’s latest lady love is just a two-bit whore.

Jack was surrounded by an inexpensive but talented cast: Armstrong as his trusting, ape-like pal (he has a terrific moment of homicidal menace toward the end of the film); tough, wise-cracking Mae Clarke and Muriel Kirkland; and fellow riveters Sterling Holloway and Vince Barnett. Only Jack was fatally miscast; the role called for a tough mug like Spencer Tracy (who had played the equivalent role in Goldie) or James Cagney. Jack came off as more of a lounge lizard; the kind of smoking-jacketed smoothie played so effectively by Ralf Harolde and Monroe Owsley in the early 1930s. He was also starting to show his age.  In Fast Workers Jack looked every day of his thirty-four years, and one could see the handsome, weathered, middle-aged man he might have become.

The New York Times did not think much of Fast Workers, and downright hated Jack’s character: “The suspicion grows, watching Gunner Smith at his increasingly moronic tricks; in real life, Gunner would be pitched from a convenient skyscraper by his outraged fellow workers for one-tenth [of] the things he does in this picture.” Fast Workers cost $525,000—still quite a high-budgeted film, especially in the price-cutting year of 1933—and lost $360,000 when it was released in March [of] 1933.

John Gilbert: The Last of the Silent Film Stars by Eve Golden (2013) 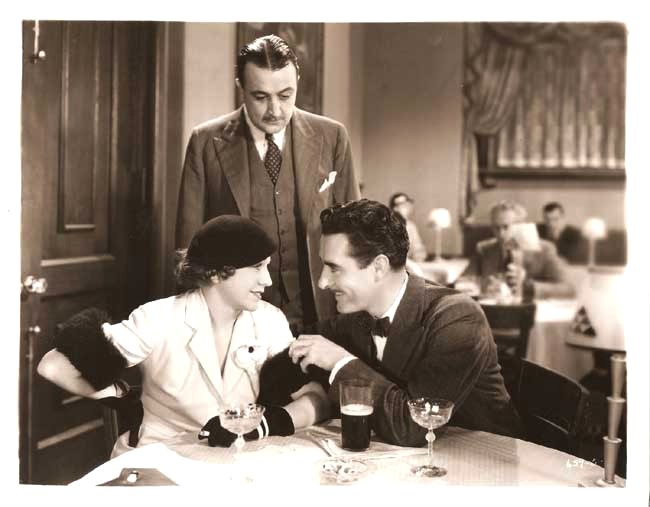 Jack’s last picture under the “damned contract” was a negligible piece of work directed by Tod Browning, called Fast Workers. It was taken from a play, Rivets, by John McDermott, about life with the construction workers on the tall buildings going up in New York. Again, Jack played a villain, Gunner Smith; a temperamental and sometimes sullen lover. “He drinks freely, punches men he does not like, mistreats his women, deceives his friends, and shows himself to be an intolerable braggart,” said The New York Times.

The cast included Mae Clarke, best known for having [had] a grapefruit shoved in her face by Jimmy Cagney the year before (speaking of a new style of lovemaking), and Robert Armstrong, best known a year later as the white hunter who brought in King Kong. Virginia Cherrill, who played the beautiful blind girl in Chaplin’s City Lights, also had a part. (She was about to marry Cary Grant, the first of five husbands, eventually working her way up to the ninth Earl of Jersey.) Tod Browning, the director, was being punished. This was his only film of the year. He’d made Freaks the year before; an expensive, ghastly, and grotesque picture (and underground classic) that had to be drastically cut and later shelved after a San Diego preview in which a woman ran screaming up the aisle.

Fast Workers, according to the New York Daily Mirror, was a picture that “makes small use of the celebrated Gilbert charm…. Gilbert does the best he can in this unfortunate role.” The New York Evening Post said: “That such an indifferent story should have been allotted to Jack Gilbert is a matter to be regretted.… He had always been an excellent performer, although the fact seems to have been largely overlooked in recent years. In his current film he gives a capable performance…but he is obviously handicapped by the limits of the piece.”

Dark Star: The Untold Story of the Meteoric Rise and Fall of the Legendary John Gilbert by Leatrice Gilbert Fountain with John R. Maxim (1985)

Cut from a familiar pattern, the story presents Robert Armstrong as a dull-witted friend of the Gunner’s who is forever losing his heart and his bankroll to predatory females. One designing girl, excellently played by Mae Clarke, separates Mr. Armstrong from most of his available cash and then completes the job by inducing him to marry her. Meanwhile, the Gunner is assisting her to spend his friend’s savings. In a fit of remorse, the Gunner exposes the whole arrangement and tries to save his friend from the woman. From comedy the film suddenly drops into melodrama in what is apparently a belated effort to endow Gunner Smith with some human qualities. As a romantic actor and comedian, Mr. Gilbert is no better than the part he plays. Mr. Armstrong helps the comedy with his portrait of the sentimental dullard, and Fast Workers is most acceptable in those scenes where Miss Clarke is filling his ears with tearful stories about her misfortunes in the big city.