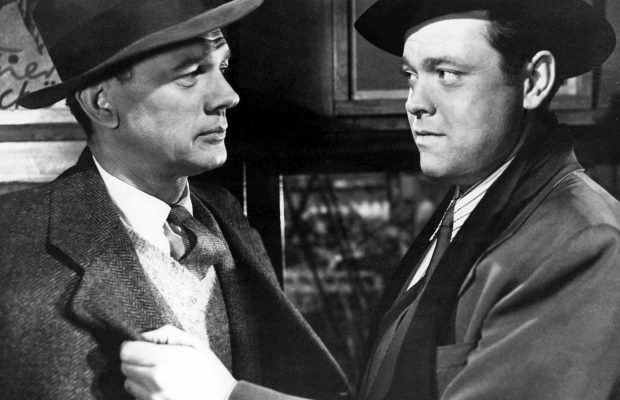 Toronto Film Society presented The Third Man (1949) on Sunday, April 15, 2018 in a double bill with Act of Violence as part of the Season 70 Sunday Afternoon Film Buffs Series, Programme 7.

Toronto Film Society presented The Third Man (1949) on Monday, November 9, 1981 in a double bill with The Naked Prey as part of the Season 34 Monday Evening Film Buffs Series “B”, Programme 3.

The Third Man was never written to be read but only to be seen.  Like many love affairs it started at a dinner table and continued with many headaches in many (cities around the world.)

Most novelists, I suppose, carry round in their heads or in their notebooks the first ideas for stories that have never come to be written.  Sometimes one turns them over after many years and thinks regretfully that they would have been good once, in a time now dead.  So years back, on the flap of an envelope, I had written an opening paragraph: “I had paid my last farewell to Harry a week ago….”  I, no more than my hero, had pursued Harry, so when Sir Alexander Korda asked me to write a follow up film for Carol Reed (Greene had written The Fallen Idol), I had nothing more to offer than this paragraph.  Though Korda wanted a film about the four-power occupation of Vienna, he was prepared to let me pursue the tracks of Harry Lime.

To me it is almost impossible to write a film play without first writing a story.  Even a film depends on more than plot, on a certain measure of characterization, on mood and atmosphere; and these seem to me almost impossible to capture for the first time in the dull shorthand of a script.  One can reproduce an effect caught in another medium, but one cannot make the first act of creation in script form.  One must have the sense of more material than one needs to draw on.  The Third Man, therefore, though never intended for publication, had to start as a story before those apparently interminable transformations from one treatment to another.

Of these treatments Carol Reed and I worked closely together, covering so many feet of carpet a day, acting scenes at each other.  No third ever joined our conferences; so much value lies in the clear cut-and-thrust of argument between two people.  To the novelist, of course, his novel is the best he can do with a particular subject; he cannot help resenting many of the changes necessary for turning it into a film or a play; but The Third Man was never intended to be more than the raw material for a picture.  The reader will notice many differences between the story and the film, and he should not imagine these changes were forced on an unwilling author: as likely as not they were suggested by the author.  The film in fact, is better than the story because it is in this case the finished state of the story.

Some of these changes have obvious superficial reasons.  The choice of an American instead of an English star involved a number of alterations.  For example, Mr. Joseph Cotton quite reasonably objected to the name Rollo.  The name had to be an absurd one, and the name Holley occurred to me when I remember that figure of fun, the American poet Thomas Holley Chivers.  An American, too, could hardly have been mistaken for the great English writer Dexter, whose literary character bore certain echoes of the gentle genius of Mr. E.M. Forester.  The confusion of identities would have been impossible, even if Carol Reed had not rightly objected to a rather far-fetched situation involving a great deal of explanation that increased the length of a film already far too long.  Another minor point: in deference to American opinion a Rumanian was substituted for Cooler, since Mr. Orson Welles’ engagement had already supplied us with one American villain.

One of the very few major disputes between Carol Reed and myself concerned the ending, and he has been proved triumphantly right.  I held the view that an entertainment of this kind was too light an affair to carry the weight of an unhappy ending.  Reed on his side felt that my ending—indeterminate though it was, with no words spoken—would strike the audience as unpleasantly cynical.  I admit I was only half convinced; I was afraid few people would wait in their seats during the girl’s long walk from the graveside and that they would leave the cinema under the impression that the ending was as conventional as mine and more drawn-out.  I had not given enough consideration to the mastery of Reed’s direction, and at that stage, of course, we neither of us could have anticipated Reed’s brilliant discovery of Mr. Karas, the zither player.

The episode of the Russians kidnapping Anna—a perfectly possible incident in Vienna—was eliminated at a fairly late stage.  It was not satisfactorily tied into the story, and it threatened to turn the film into a propagandist picture.  We had no desire to move people’s political emotions; we wanted to entertain them, to frighten them a little, to make them laugh.

Reality, in fact, was only a background to a fairy tale; none the less the story of the penicillin racket is based on a truth all the more grim because so many of the agents were more innocent than Joseph Harbin.  The other day in London a surgeon took two friends to see the film.  He was surprised to find them subdued and depressed by a picture he had enjoyed.  They then told him that at the end of the war when they were with the Royal Air force they had themselves sold penicillin in Vienna.  The possible consequences of their act had never before occurred to them. 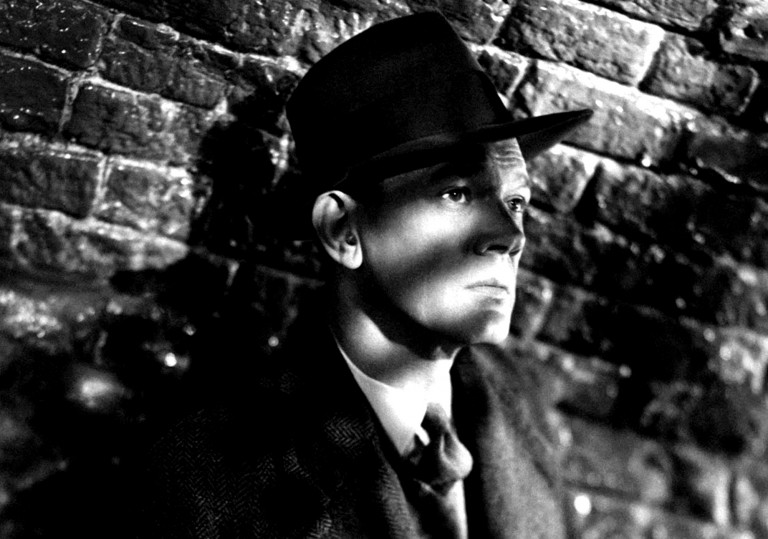 A zither is singing its sad-sweet melody as Joseph Cotten leans on a cart by the side of a tree-lined cemetery road. Off in the distance, like a faraway train seen down the ties of a railroad track, Valli approaches head on. She is, at first, a dot, then a pencil shadow, then a lovely young woman. We’re set for the conventional Hollywood ending. Cotten will make a gesture; perhaps take a step forward. And she will turn and come toward him. And they will embrace as the humming, pinging music rises and “The End” flashes across the screen. But in another moment, we realize that something odd is happening. Cotten isn’t moving. And Valli isn’t stopping. On she comes, walking right by him and out of the picture, and we sit there in mild shock as the last frames of The Third Man play out. This is the final irony in a film that is a masterpiece of ironies, a thriller whose intricate plot has as many fascinating twists and turns as the baroque architecture and narrow, winding streets of Vienna, where the picture was made. Running through it all, like an undercurrent, is the pulsing, mesmerizing voice of the zither; the shallow, forty-stringed boxed instrument created movie magic. Not only did it hold the picture in focus, it became an entity unto itself; a kind of cynical commentator on the unfolding drama. (50 Classic Motion Pictures, David Zinman (1971), pp. 292-297.)

The Third Man is a flawless film of intrigue and suspense; a summit of perfection within the genre. It is one of the most literate thrillers ever made. (The original screenplay was by the great British writer Graham Greene, who later adapted his screenplay into a novel). It is superbly acted by an ensemble working in an understated, effortless style (Joseph Cotten, Orson Welles, and Trevor Howard). Its cinematography includes some of the best black-and-white work ever done. (Robert Krasker won the Academy Award against Sunset Boulevard, All About Eve, and The Asphalt Jungle!) Its score of haunting zither music by Anton Karas is still remembered, instantly familiar to anyone who ever saw the film, and now thoroughly identified with most people’s impressions of Vienna. Finally, the producing of Alexander Korda (known for having “saved” the British film industry on account of his “quality” productions) and the direction of Carol Reed are exemplary. Rarely has a motion picture represented the collaboration of so many exceptional talents. The Third Man may be the greatest film made in Britain since World War II. (The Great Movies, William Bayer (1973), pp. 53-56.)