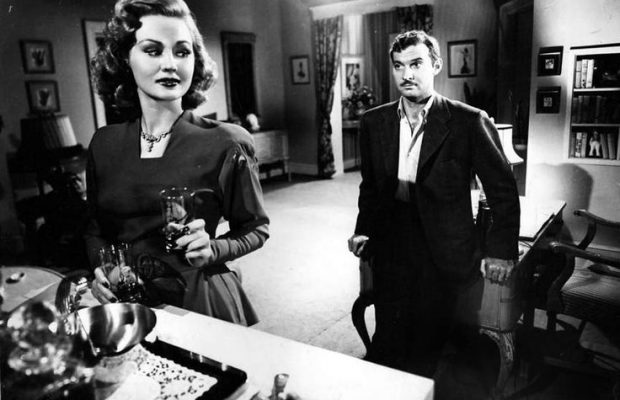 Toronto Film Society presented Flaxy Martin (1949) on Monday, August 21, 2017 in a double bill with Born to Be Bad as part of the Season 70 Summer Series, Programme 6.

Flaxy Martin is a Warner Bros. release that came to theatres the same year as the studio’s White Heat.  The latter, with its elevation of a mother-obsessed psychotic to antihero status, stunned audiences with its modernity.  But Flaxy Martin looks back instead of forward and seems a product of an earlier era.  Besides Warner Bros., the only thing that connects Flaxy Martin and White Heat is leading lady Virginia Mayo.

When Flaxy Martin was released early 1949, millions of American women had already learned the value of independence by going to work during World War II. Flaxy must have been sitting out the conflict, however, because she’s a gold digger very much in the mold of “kept women” of the 1920s and ‘30s.  Tall, stylish, and thoroughly gorgeous, she figures she has all the natural equipment needed to free her from the worry of work.  To that end, she plays Zachary Scott and Douglas Kennedy against each other, getting what she can from each and looking forward to yet another month in her fabulous, rent-free apartment.

Certainly such women as Flaxy still existed in 1949.  There were plenty of men who were willing to support such women.  But the best movies look forward offering progressive, mature views of their principal characters.  And David Lang’s glib script doesn’t offer a hint of why she is the way she is.

Director Richard L. Bare’s forte was comedy.  He directed every episode of TV’s Green Acres.  He’s certainly not at sea with Flaxy Martin, but the wildly strident performance of the usually understated Elisha Cook Jr. suggests that Bare’s affinity for broad playing came naturally and was difficult for him to suppress.

Interestingly, it appears that Zachary Scott has an affinity for Dangerous Dames since he’s going to have to deal first with Mayo, and then after the break, Fontaine.  So Enjoy!

Sourced from Film Noir FAQ: All that’s Left to Know about Hollywood’s Golden Age of Dames, Detectives, and Danger by David J. Hogan (2013)

Plot: The plot is far too complicated to allow easy condensation, and is probably best summarised by critic Michael Barrett. “It is a plot full of unpleasant people in an unpleasant world of big city corruption where the law is twisted to serve the gangsters. Zachary Scott plays Colby, a loud, whining shyster who keeps mouthing off to his boss (Douglas Kennedy), a nightclub owner who needs one of his mugs cleared of murder. Compounding Colby’s misjudgement is the title dame, Virginia Mayo, one of the most clinically amoral femmes fatales in the genre”.

Critical Response: A critic for Classic Film Freak writes that “Beyond the quirky name of the title character, Flaxy Martin has quite a bit to offer. As Flaxy, Mayo is devilishly good, and as the film plays out, we see her diabolical personality play men (and at least one woman) solely to get what she wants and needs.” After much corruption and double-crossing, the final shoot-out is “extremely satisfying” and the best feature of the film is “the acting of both Virginia Mayo and Zachary Scott”. Michael Barrett (above), however, claims that the actor getting the best showcase is ‘the typically excellent Elisha Cook, Jr. as a menacing punk who keeps calling the lawyer ‘shamus’”.

Virginia Mayo (1920-2005): Born in St. Louis, Missouri, in a family that had strong historical ties to the American Revolution, she attended acting school at the age of six, and joined the St. Louis Municipal Opera after graduating from high school. She then performed on the American vaudeville circuit for three years and had her first appearance on Broadway in 1941, after which she came to the attention of Samuel Goldwyn. He signed her to an acting contract and starred her in four Technicolor musicals, where she personified the “dream girl” for male audiences and worked with Bob Hope and Danny Kaye. Her true acting abilities came out in the mid-1940s, with her role as the unsympathetic, sluttish wife of returning war veteran Dana Andrews in The Best Years of Our Lives (1946), and in two films directed by Raoul Walsh, White Heat and Colorado Territory. These were followed in the 1950s with films in various genres–comedy, adventure, musical, historical and period dramas, and westerns, though her film career began to decline after 1960 and she turned to television and the stage, instead. She was a strong Republican, politically, supporting both Richard Nixon and Ronald Reagan.

Zachary Scott (1914-1965): Born in Austin, Texas, he was of direct Geek descent, with the real surname of Skotidis. After considering a career as a doctor, he settled on acting, working in repertory and local theatre in America and England. He worked, for a time, on Broadway before being signed by Jack Warner and appearing in Mildred Pierce and The Mask of Dimitrios, to much acclaim. He enjoyed playing sophisticated scoundrels and villains in these films, though he had a more sympathetic role in Jean Renoir’s The Southerner. He also appeared in Luis Bunuel’s The Young One, in 1960. After a serious injury in a rafting accident and an acrimonious divorce, he suffered from a depression that resulted in heavy drinking and the decline of his film career, followed by a switch to television and the stage, instead. He remarried and died of a brain tumor at the age of 51.

Dorothy Malone (born 1924): Born in Chicago, she had an early interest in acting and was spotted by an RKO talent scout in 1943, though her first roles were mainly in small parts in B-movies. She had a memorable, though minor role as a bookstore clerk in The Big Sleep (1946), and then moved to more sexually explicit roles for director Douglas Sirk in Written on the Wind (1956) and The Tarnished Angels (1958), as well as appearing in Warlock, with Henry Fonda, and The Last Sunset, with Rock Hudson. Her later career, from 1960 on, was mostly in television, in works such as Peyton Place.

Monte Blue (1887-1963): His early work was in a variety of jobs, including work as a day labourer in D.W. Griffith’s studios, where he began to play bit parts in The Birth of a Nation, Intolerance, and other films, before moving to supporting roles for Griffith and Cecil B. DeMille; most notably as Robespierre in Orphans of the Storm. He then became a romantic lead in a series of melodramas and comedies, co-starring with such actresses as Clara Bow, Gloria Swanson, and Norma Shearer and under the direction of such directors as Ernst Lubitsch in The Marriage Circle, So This is Paris, and Kiss Me Again, though his finest role is judged to be in White Shadows in the South Seas, in 1928. He moved smoothly into a prolific career in sound films, though in fewer masterpieces. He retired from film in 1958 and spent the remainder of his career in television.

Elisha Cook, Jr. (1903-1995): He was born in San Francisco, had an early appearance on the stage at the age of 14, and later acted in the two-year run of Eugene O’Neill’s Ah! Wilderness on Broadway, before moving to Hollywood in 1930. There, he specialised in roles involving weaklings or sadistic losers and hoods, his most memorable such roles being in The Maltese Falcon (1941) and The Big Sleep (1946). He rarely emerged alive at the end of these films, having been strangled, poisoned, or shot in the meantime. He also made memorable appearances in Shane, The Killing, and Rosemary’s Baby and appeared often on television. He married twice, but spent a lot of time on his own, fishing in the High Sierra until summoned by a courier from Hollywood to tell him that he was wanted for a film role.