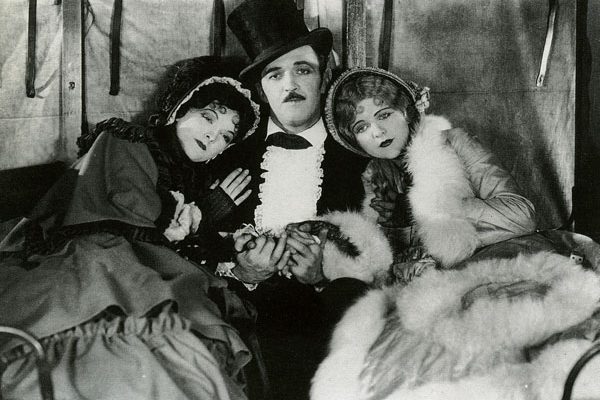 Tonight’s show exemplifies the work of several outstanding Hollywood comedians with widely varying styles, one of them neglected and forgotten to an unfortunate degree.

Harold Lloyd, never ranked critically with such as Chaplin, Keaton or Langdon, was nevertheless one of the most fabulously popular of all American movie comedians, and it’s not hard to understand why.  His oddly appealing combination of meekness and brashness (he often played the “worm who turned”); his portrayal of the eager young man determined to “make good” at all costs; the speed of his films and the fertile invention of his famous stable of “gagmen”; all combined to hit the bullseye of public fancy.  At one time moderately successful as a mustached type named “Lonesome Luke”, he hit his real stride when he decided on (and with some difficulty sold his employers on) the bespectacled character that brought him world fame (he was especially loved, it seems, in Japan!)

High and Dizzy might be called a sketch for his later feature-length hit Safety Last (made in both silent and sound versions).  The Museum of Modern Art Film Notes say that in it “he was still in process of transition from the romping inconsequence of slapstick to the thought-out gags of his longer pictures”.

There were some curious dichotomies in Lloyd’s work not often noted.  Though always a “family favorite” and generally hailed for the “wholesomeness” of his films, some of his talkies had occasional, surprising sadistic touches and risque lines; and even in the “innocent” silent era I can recall some criticism being made of the taste behind some rather grim anti-mother-in-law gags in Hot Water and drunk scenes in For Heaven’s Sake!

Some of his better fetures: Silent – Grandma’s Boy, The Freshman, Speedy, The Kid Brother; Sound – Welcome Danger, Feet First, The Milky Way (much better than Danny Kaye’s version, The Kid from Brooklyn), The Cat’s Paw and Movie Crazy.

His last film was Preston Sturges’ Mad Wednesday.  Lloyd married his early leading lady Mildred Davis; they still live together in one of Hollywood’s more ornate homes.  An active Shriner, Lloyd recently has been planning an omnibus film made up of highlights from his silent and talkie hits.

Like that of Lloyd, the careers of Laurel and Hardy (of all comedy teams the most sensationally popular over the longest period) spanned the fields of short and feature, silent and sound films and eventual retirement (ending, of course, in death for Hardy).  They adapted their style and pace to the sound medium with unusual success, though perhaps they were never quite as happy in full-length films as in the long and wonderful series of shorts; and the quality of their features dropped sharply in later years when they were no longer allowed to select and shape their own material.

Hal Roach (producer of both the above shorts), while not as celebrated in movie-comedy history as Mack Sennett, nonetheless deserves a niche of his own, as he turned out high-grade short comedies for many years for both Pathe and MGM.  Some of his other stars were: Bebe Daniels, Snub Pollard, Charlie Chase, “Our Gang”, Zasu Pitts, Patsy Kell and Thelma Todd.  He also has made a number of featurs, most of them pretty uninspired.  The best: Steinbeck’s Of Mice and Men, Thorne Smith’s Topper and Turnabout, and One Million B.C., the latter unofficially but actually shot by one D.W. Griffith.

Most of the notables of silent screen comedy are still more or less “household names”–everyone has heard of Charlie Chaplin, Buster Keaton, Harold Lloyd, Laurel and Hardy and Mack Sennett; and through film-society showings and the writings of James Agee, Harry Langdon has been rescued from semi-obscurity.  But the one Forgotten Man appears to be Raymond Griffith–perhaps because, though a popular star in his day, he purveyed a rather special sort of humor that found acceptance in a period when the sophisticated comedy of directors like Lubitsch, Mal St. Clair and Harry d’Arrast, and players like Adolphe Menjou, was flourishing.

Smooth, urbane and ironic, his style and personality were quite unique. Most of his films were satires on one or another popular movie genre; on crook melodrama in Paths to Paradise; on “royalty-loves-commoner” romance (with obvious references to the Prince of Wales) in A Regular Fellow; on detective thrillers in You’d Be Surprised.  In tonight’s picture he has a go at Civil War epics–the MMA Notes all it “a neat and pointed parody of Wild Western heroics starring the suave comedian who, with Adolphe Menjou, carried on the ironic tradition of Max Linder”.

With the release of his last silent film, Trent’s Last Cast, Griffith’s acting career was virtually over, as he had a voice that amounted only to a whisper.  He did make some two-reel comedies in 1929 in which he was cast as a scarcely-audible man.  Apparently these were none too successful.  But when Lewis Milestone made All Quiet on the Western Front, he cast Griffith in a brief but highly important part that proved a truly unforgettable “swan-song”–the mute, poignant role of the French soldier who dies in the shell-hole scene with Lew Ayres.  Griffith himself died a year or two ago.

Clarence Badger, the director of Hands Up!, though never hitting the movie Hall of Fame, was one of the more skilled and reliable comedy directors of the Twenties at Paramount; and made many of the vehicles of Raymond Griffith, Clara Bow, Bebe Daniels and others.

Our Next Programme – Monday, November 20: Eisenstein’s Strike; Renoir’s The Little Match Girl. (Unfortunately these notes, along with January 15th’s Mauritz Stiller’s The Treasure of Arne  and April 16th’s V.I. Pudovkin’s Mother are missing from this Silent Season.  If you happen to have these in your files, please don’t hesitate to contact TFS.  You’ll find contact info on our contact page – Caren Feldman)