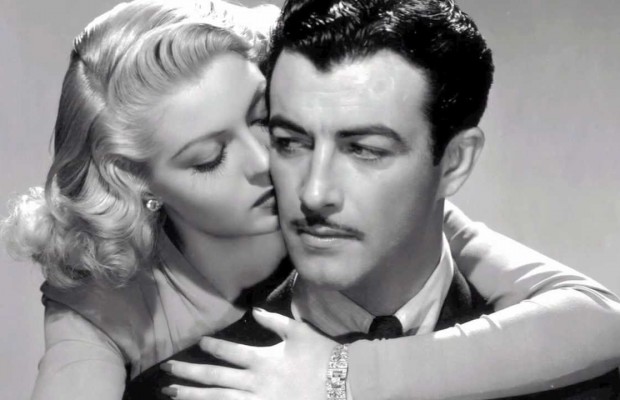 ‘Johnny Eager’ is another Metro showcase to spotlight Robert Taylor as a rough customer in his cinematic assignments.  It’s an underworld meller with a few new twists to the usual trappings, but by and large it’s the familiar tale of slick gangster vs. innocent rich girl.  The Taylor-Lana Turner starring duo is sufficient marquee voltage to carry through the regular runs for profitable biz.

The romantic adventures of Taylor are just as important as his racketeering and conniving, and his fickle love affairs are clearly pointed—even to the one with debutante Miss Turner.  It’s only a few

minutes before his demise that he realizes she’s the real thing—and then it’s too late to do anything more than atone for his misdeeds to conform to the Hays Production Code.

The overlength script employs several new twists to familiar situations; but after a novel and intriguing opening story unfolds in regulation style.  A 20-minute trim would materially aid in speeding things up.

Taylor, with his hair slightly ruffled to make him a rough-tough guy, drives a taxi for the benefit of the parole board while directing his underworld activities of slot machines, protection and expected opening of a dog track.  Miss Turner meets him at the parole office, and falls in love with the intriguing ex-convict.  After discovering his gangster activities, she holds the secret, but is the victim of a phoney murder staged by Taylor so the latter can control the girl’s stepfather, the crusading prosecutor, and so open the dog track against injunction.  Inter-gang jockeying for control of the track involves Taylor in a murder, but before he’s bumped off Miss Turner is told of his love and pushed off on her millionaire boy friend.

Taylor effectively handles the pretty-boy (not a reflection on him, personally) characterization, effectively, with Miss Turner clicking in the acting line and a most easy subject for the men to look at.  Van Heflin, as the perpetually –soused companion of Taylor, is outstanding, dominating every scene in which he appears.  Heflin, former member of Katherine Hepburn’s ‘Philadelphia Story’ play

group, delivers one of the top support performances of the year.  Others in the cast include a careful selection of competent players, Edward Arnold, Robert Sterling and Patricia Dane are most prominent.  Excellent smaller parts are supplied by Glenda Farrell, Henry O’Neill, Barry Nelson, Paul Stewart and Cy Kendall.

Director Mervyn LeRoy highlights the meller moments in competent style, while camera work by Harold Rosson is uniformly good throughout.

Although gangster melodramas are not precisely the height of fashion right now, MGM’s scenario tailors have done a consummate fitting job for Robert Taylor and Lana Turner in “Johnny Eager,” now at the Capitol. As another case history of a relentlessly bad boy riding high and handsome “straight for judgment day” it is highly colored hokum in which women are “dames” and guns are “gats.” But it has been made with a flourish. Under Mervyn LeRoy’s keen directorial hand Mr. Taylor seems nearly as cold-blooded as he sounds and he is evenly matched by Miss Turner, still playing an ill-starred Isolde to lawless males. Among them they have turned “Johnny Eager” into a tight tale of underworld terror that drives hard—even in the clinches.

It is box-office sugar, pure and simple, but by a sort of unwritten tradition it is inferred that Johnny is a misguided genius who could have scaled figurative mountains if he’d only had a warmer childhood. Maybe. As a cabbie who puts up a penitent front for the parole board but removes the drab in the plushy surroundings of his race-track hideaway, Johnny leads a charmed life, pure in its

absolute selfishness. He bumps off pals with stern discipline. His alibis are airtight. When the District Attorney turns down the screws he frames the D. A.’s adopted daughter, who has fallen in love with him. But even Johnny has an Achilles heel of nobility. To clear the girl’s mind of a crime she thinks she’s committed, he dies at last in a grimy back alley under a fusillade of bullets.

If this were serious drama one might complain that what makes Johnny tick remains a mystery, that lovely students of sociology aren’t apt to embark on discussion with a parolee on Cyrano de Bergerac’s apostrophe to a kiss. But as pure melodrama “Johnny Eager” moves at a turbulent tempo. Mr. Taylor and Miss Turner strike sparks in their distraught love affair. Van Heflin provides a sardonic portrait of Johnny’s Boswell, full of long words and fancy quotations. Edward Arnold, Robert Sterling and Lou Lubin are excellent in lesser roles. The script is strongly worded; Mr. LeRoy has kept the production in key. Though “Johnny Eager” lacks purpose, it has a strong charge of shock and excitement.