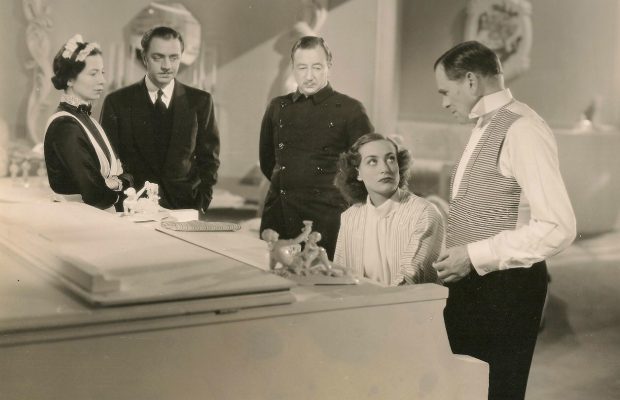 Toronto Film Society presented The Last of Mrs. Cheyney (1937) on Monday, September 26, 2016 in a double bill with The Kennel Murder Case as part of the Season 69 Monday Evening Film Buff Series, Programme 1.

This remake of the 1929 version starring Norma Shearer was not a box office success.  According to the research done in Alexander Walker’s 1983 book Joan Crawford: The Ultimate Star, Irving Thalberg’s last two productions before his death, Romeo and Juliet and The Good Earth accounted for a major loss for MGM.  So when Mayer personally addressed Sam Eckman, MGM’s London head in November 1936 if he thought Joan would be a good fit in the remake, Eckman’s reply, though favourable should have put Mayer on his guard against the datedness of the theme.

It was considered a “disturbed” production especially because director Richard Boleslawski died at the age of 47 of cardiac arrest in the middle of it; George Fitzmaurice was assigned to take over and at the last minute this was countermanded, assigning the only female director at the time, Dorothy Arzner to complete it.

Arzner and Crawford took to each right away.  Dorothy was four or five years older than Joan, but looked like a youth in her mid-twenties and could be mistaken for a boy.  She was invariably impeccably turned out, usually in twill trousers or tweeds tailored with a chic yet masculine line.  She affected a slouchy hat on the set.  Yet the effect, instead of being “butch”, was the crisp statement by a talented and shrewd woman of the qualities she wore comfortably in the Hollywood studios where she freelanced.  In this almost exclusively male word where people in power were concerned, exceptional female talents like Arzner and Margaret Booth, one of MGM’s pre-eminent editors, were accepted, even admired, but as workers first, and then a long way after, as women.

Lawrence J. Quirk critiques the film in his book, The Complete Films of William Powell, saying casting Powell and Crawford wasn’t the happiest of inspirations, for their mystiques or chemistries mixed “like the proverbial oil and water,” and they never did another picture together.  As the third member of the cast, Robert Montgomery’s presence was far more complementary to Crawford even though they personally disliked each other.

Let’s see what we think of this story and film almost 80 years after its original 1937 release.

A light-hearted robbery movie similar in theme to other ‘rob from the rich’ films made during the Great Depression. Crawford is the thief, Powell her accomplice, and Montgomery the wealthy cad. The supporting cast includes many of Hollywood’s British film colony from the big studio era. Chief among those is Nigel Bruce, who is best remembered for his portrayal of Doctor Watson alongside Basil Rathbone’s Sherlock Holmes. Although Holmes purists have a strong dislike for Bruce’s Watson, it is his characterization that is most thought of when Doctor Watson is mentioned.

In Mrs. Cheyney Bruce’s portrayal of Willie Wynton is not unlike many of his characterizations of the slightly dozy upper class English gentleman. While he made this type of character his own, he was cast against type in the first Oscar winner for Best Special Effects, The Rains Came (1939).  His Lord Esketh character is a wealthy, bigoted, derisive, and cruel spirited man.  He treated his wife, Myrna Loy, as another of his possessions and was contemptuous of all others he interacted with.  Film reviewer Frank Nugent gave special notice to the supporting cast, including Bruce.

William Nigel Ernle Bruce (4 February 1895 – 8 October 1953) was the second son of Sir William Waller Bruce, 10th Baronet (1856-1912) and his wife, Angelica Lady Bruce (died 1917), daughter of General George Selby of the Royal Artillery. He was born in Mexico while his parents were on holiday there.  After completing school, he joined the British Army at age 19 and served in France from 1914 as a lieutenant in the 10th Service Battalion of the Somerset Light Infantry and Honourable Artillery Company.  He was severely wounded in his left leg at the First Battle of Cambrai (1917) and spent the remainder of the war convalescing.

He made his first stage appearance on May 12, 1920 as a footman in the play Why Marry. In October of 1920, he went to Canada as stage manager for the British acting couple Henry V Esmond and Eva Moore. He also played the character Montague Jordan in Esmond’s play Eliza Comes to Stay: A Farce in 3 Acts. Upon his return to England, he toured, acting the same part. He appeared constantly onstage thereafter, and eight years later started working in British silent films. In 1934, he moved to Hollywood and became part of the British Colony there. His contemporaries included, among others: Ronald Colman, C. Aubrey Smith, Melville Cooper, Cary Grant, Charlie Chaplin, David Niven, Leslie Howard, Basil Rathbone (a South African), and Errol Flynn (an Australian).

Nigel Bruce was married from 1921 until his death to British actress Violet Campbell (née Violet Pauline Shelton; 1892-1970). He always lovingly called his wife “Bunny” with whom he had two daughters, Jennifer and Pauline.

Despite his long residence in the United States, he never gave up his British citizenship.  For many years, he was Captain of the Hollywood Cricket Club and retained memberships in the London gentleman’s clubs Garrick’s Club and Buck’s Club.  Bruce died from a heart attack in 1953 at the age of 58. He wrote an autobiography titled Games, Gossip and Greasepaint that was never published.  However, his heirs have allowed portions of it to be published in The Sherlock Holmes Journal.