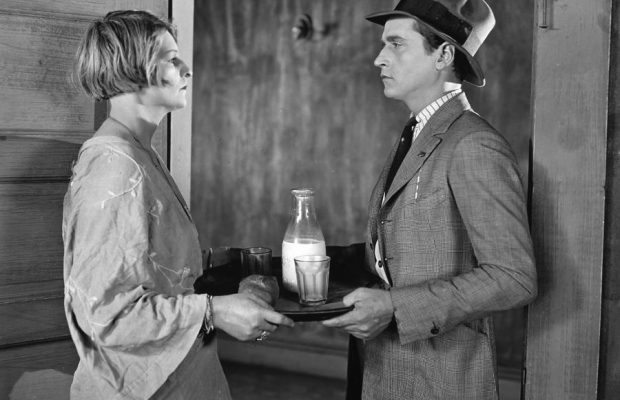 Made independently on a “shoestring”, this film created quite a stir pro and con as offbeat, “avant-garde” movie of its day, something of a screen curiosity.  We are presenting it quite frankly as such, as well as for its historical interest as the first work of a director who later became celebrated for his intriguing silent pictures (Underworld, The Last Command, Dock of New York) and his sound films with Marlene Dietrich (Blue Angel, Shanghai Express, etc.)–and also because this much-written-about film has been so little available to film students who might wish to see what it was like.  Many and fascinating are the legends about Salvation Hunters.  It was said that von Sternberg took a number of street scenes as “candid” shots with a hidden camera to increase the impression of actuality.  One read that, unable to continue paying one of the actors, the director used a shadow to represent him in his remaining scenes, and that this strictly economic stratagem was hailed by critics as an “imaginative artistic tough”!  It was rumored that, at a preview, one impressionable lady, unnerved by a long sequence of a dredge scooping up earth, rose and cried: “The man who made this picture out to be shot!”–and that the scene was shortened in consequence.  It has even been claimed that Chaplin’s sponsorship of the film was a hoax–though this seems unlikely, as his company, United Artists released it, and he used its leading lady, Georgia Hale in his own film The Gold Rush–and also hired von Sternberg to direct Edna Purviance in The Sea Gull (never released as it was considered little but a series of lovely shots.)

When von Sternberg introduced Salvation Hunters at a recent screening in New York, he expressed the wish that the film could remain quietly in the vaults.  Since it was being shown, he offered a few facts in its defense.  It was made, he said, solely to introduce him to the film world.  He admits it is intentionally pretentious and arty, that camera tricks were thrown in for their own sake, that symbolism is sometimes labored.  Since the film achieved its end, criticisms of those factors which enabled it to do so seem rather out of place.  Sternberg, however, was trying to do more than just make a show-piece.  He felt the films of the mid-20’s were too slick, too fast.  He wanted to slow down the pace, to concentrate on mood rather than plot.  This was a characteristic of most of his later silents (particularly Docks of New York) and in Salvation Hunters one has a valuable blue-print of his initial approach to cinema.  Certainly its mood is tremendously effective; after reels of mud, slime and dingy slum dwellings, one can almost smell the fields and feel the fresh air when the hero and heroine get out into the country for a glorious yet simple outing in the closing reels.  Such intense audience-identification is not common in cinema, and stresses the power of Sternberg’s persuasion even at that period.  Photographically, it is as flawless as most of his films, apart from the undue repetition of certain shots and visual ideas–i.e. having the villain back up continually against a pair of horns on the wall, in such a way that they seem to protrude from his temples.  Sternberg claims he made the film for less than $5,000.  Even for 1925 this was a fabulously low figure, especially for a film by no means brief and exuding a very definite professional polish.  With Fairbanks and Chaplin enthused over the film, it was purchased by UA.  The production cost was recouped in just one night!  Reviews, however, were mixed, and violently so.  Harrison’s Reports, a reviewing service for exhibitors, launched an all-out campaign against the film, claiming it was the most repelling “sewer, gutter and sex” picture since Greed, and that if Fairbanks and Chaplin owned a theatre and played this sort of junk, they would soon be arrested by the sheriff for vagrancy.  (A year later, when this publication reviewed another “indecent” film called Potemkin, the whole issue was raised again!)  In any event, Salvation Hunters is unique as an art-for-art’s-sake movie that didn’t lose its shirt, and a film which was responsible for launching von Sternberg on a long and illustrious career.

Paul Rotha says in The Film Till Now: “Sternberg succeeded in making this picture independently of the big producing concerns, no mean feat, and credit must be given on that account to his enterprise and courage–it is rather like the dustbins and garbage of Cavalcanti (Rien Que Les Heures)–it seems if one can make a picture so dreary, dull and depressing that it defeats criticism, one will be hailed as a genius.  The pseudo-success of Salvation Hunters left an uncomfortable mark on the work of von Sternberg–his films are always self-conscious”.

Lewis Jacobs in The Rise of the American Film: “–a man who, to prove his talent, struggled against odds to raise credit and make a film on his own.  Salvation Hunters was made soon after von Stroheim’s Greed, and like other movies stimulated by that picture, had the same realistic approach, but with individual touches–the empahsis on sordid atmosphere, the lack of action, the pictorially posed characters, and the many symbolic references were the particular concerns which were to continue to dominate von Sternberg’s work”.