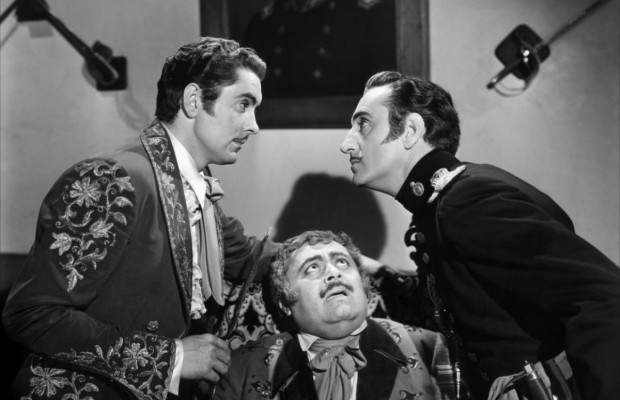 Toronto Film Society presented The Mark of Zorro (1940) on Sunday, March 20, 2016 in a double bill with The Crimson Pirate as part of the Season 68 Sunday Afternoon Film Buff Series, Programme 6.

Plot
The story and characterisation of the film closely follow its 1930 predecessor starring Douglas Fairbanks, itself a landmark in the development of the action/adventure film. Don Diego (Power) is summoned home from his military education in Spain to defend his wealthy rancher father from competition by the corrupt Luis Quintero; but he appears at first to be little more than an ineffectual fop, incapable of taking any action whatsoever. In reality, he takes on the role of El Zorro, the masked defender of the oppressed common people, and establishes a rivalry with Quintero’s vicious henchman, Captain Pasquale (Rathbone) that climaxes in one of the most spectacular and convincing rapier duels ever seen on the screen, both men being truly expert swordsmen.

Tyrone Power (1914-1958)
Born in Cincinnati, Ohio, he came from a long line of theatre performers and was encouraged to pursue an acting career by his father, also named Tyrone Power, continuing this after his father’s death in 1931; but had little success at first, despite his well known ancestry and theatrical contacts, and finally moved to Hollywood in 1936, where he attracted the attention of director Henry King and was given an important role in the film Lloyd’s of London. This established him as a star and was followed by a string of successes, including Blood and Sand, The Black Swan, the 1939 Jesse James (his first film in colour), and The Mark of Zorro. He served in the Marine Corps in World War II piloting cargo planes during the Pacific War, and was highly respected by his fellow officers and men. He returned to filming after the war, in The Razor’s Edge, Nightmare Alley (his own favourite among his films and one he fought hard to make, despite producer Darryl F. Zanuck’s fears that it would damage his image), as well as swashbucklers like The Black Rose and Prince of Foxes, and romantic comedies such as The Luck of the Irish. But he was also obliged by his regular studio, Fox, to take roles that he disliked, and, despite being offered the lead part in The Robe (1953), he turned it down and returned for a time to theatrical work that involved extensive tours in the United States and Canada. Back in Hollywood he was successful in John Ford’s The Long Gray Line, The Sun Also Rises, and, especially Billy Wilder’s Witness for the Prosecution, his last completed film, while also appearing on the stage. In September 1958, while he was in Spain filming the King Vidor epic Solomon and Sheba, he suffered a massive heart attack and died at the age of 44.

Power’s first marriage was to the French actress Annabella, a major French star in the 1930s, who also worked in post-War Hollywood, but the marriage was a troubled one and they separated in 1946 and divorced in 1949, after which, following an affair with Lana Turner, he married actress Linda Christian. They had two daughters before divorcing in 1955 and Power subsequently had an affair with actress Mai Zetterling and then a final marriage in 1958.

Linda Darnell (1923-1965)
Born in Dallas, Texas of unhappily married parents, she was singled out by her mother for an acting career and was on the stage by the age of 13. After some theatrical experience she signed an initial contract with RKO, but broke this to join 20th Century Fox and made her first film, Hotel for Women in 1939, at the age of 15, where her performance was well received and was followed by Day-Time Wife, in which she co-starred with Tyrone Power. They then appeared together in Brigham Young, The Mark of Zorro, and Blood and Sand, all three films establishing Darnell’s star status. But her career then began to falter and disagreements with Fox and Zanuck led to her being suspended and then reduced to secondary roles. Her career began to revive in 1944 with Summer Storm and Hangover Square and then Otto Preminger’s Fallen Angel, Centennial Summer and Forever Amber, and these were followed by Unfaithfully Yours and A Letter to Three Wives, in the latter of which she achieved considerable acclaim. But once again her career declined and conflicts with the studio led to another suspension. She turned freelance in 1951, which allowed her to work in Europe, though with little success. Back in the United States, she worked on the stage and in television but died after being trapped in a fire in a house where she was visiting friends.

Basil Rathbone (1892-1967)
Born of English parents in South Africa, but the family were forced to flee to Britain when he was three years old, after being accused during the Boer War of being English spies. He was educated in England, where he discovered an interest in theatre and, despite his father’s disapproval, joined a Shakespeare company in Stratford-on-Avon and began to appear on the stage in London and on tour in the United States. Called up for the army in 1915, he rose to the rank of captain and was awarded the Military Cross for “conspicuous daring and resource on patrol”, though he was profoundly affected by the death of his brother in action. He returned to acting after the War, with well received performances in Britain and several appearances on Broadway.

He began his film career in 1925 and played the role of detective Philo Vance in The Bishop Murder Case in 1930. In the 1930s appeared as a suave villain in such films as David Copperfield, Anna Karenina, Captain Blood, A Tale of Two Cities, The Adventures of Robin Hood and The Mark of Zorro, but came to be most widely recognised as Sherlock Holmes in two Fox films and then twelve features for Universal between 1941 and 1944, with Nigel Bruce as Dr. Watson. Originally set in the late Victorian period of the original books, they widened into more contemporary themes, and were supported by a concurrent radio series. Though this role tended to typecast him, he also appeared in such films as We’re No Angels in 1955, with Humphrey Bogart, and John Ford’s The Last Hurrah in 1958, as well as horror films and parodies such as The Tower of London and The Comedy of Terrors. He made numerous well-received appearances on Broadway, and, later, television, but there mostly in cheap second-rate thrillers and comedies Other activities included readings on radio and CD and touring with a one-man show. He was twice married and died suddenly of a heart attack in 1975.

Eugene Pallette (1889-1954)
Best known and extremely popular as a corpulent, gravelly-voiced character actor in such 1930s and 1940s films as My Man Godfrey, The Lady Eve, Mr Smith Goes to Washington, and The Adventures of Robin Hood, usually expressing comical exasperation with the behaviour of the other characters. He began his film career, however, as an extra and, at the time, a slim, athletic figure, then worked for D.W. Griffith in The Birth of a Nation and Intolerance, as well as in other films. After gaining considerable weight, he worked for Hal Roach Studios and appeared in several Laurel and Hardy movies. Despite his filmic geniality, he was thought by Otto Preminger to be “an admirer of Hitler” and infuriated the director by refusing to sit at the same table as a black actor while working on In the Meantime, Darling in 1944.

Rouben Mamoulian (1897-1987)
Of Armenian descent, he was born in Tiflis, Georgia. He moved to London in 1922 and began to direct plays, then went on America the next year, where he was involved in directing opera and theatre, and became a naturalised US citizen in 1930. He began his Broadway career in 1927 and was the first to direct on stage such classic musicals as Porgy and Bess (1935) and later in the 1940s, Oklahoma!, Carousel and Lost in the Stars. With the introduction of sound in film he was sought as someone who could direct naturalistic spoken dialogue, but he was also prominent in freeing the camera from its new, largely static, restrictions and restoring the earlier freedom of movement of silent cinema. He was also a major innovator in his use of sound in such films as Applause (1929) and Love Me Tonight (1932). Other successes in the 1930s were Dr Jekyll and Mr Hyde, often considered the best version of the story; Becky Sharp (from Thackeray’s Vanity Fair), the first three-strip Technicolor feature; the musical High, Wide and Handsome; Greta Garbo’s Queen Christina, with its famous, deliberately expressionless final shot; and the early gangster City Streets, with Gary Cooper and Sylvia Sidney. In 1940 and 1941 he filmed remakes of the silent classics The Mark of Zorro and Blood and Sand (the latter with an innovative colour scheme based on Spanish painters such as Velazquez and El Greco). But his stubborn and somewhat abrasive personality began to bring him into conflict with producers: he was fired from Laura and Porgy and Bess and–perhaps luckily for him, Cleopatra–and made only two films in his later career, both musicals: Summer Holiday (1948) and Silk Stockings (1957), though he continued to work occasionally in theatre. Partly forgotten now, he is accurately described by the British critic Philip French as “one of the great American directors”.