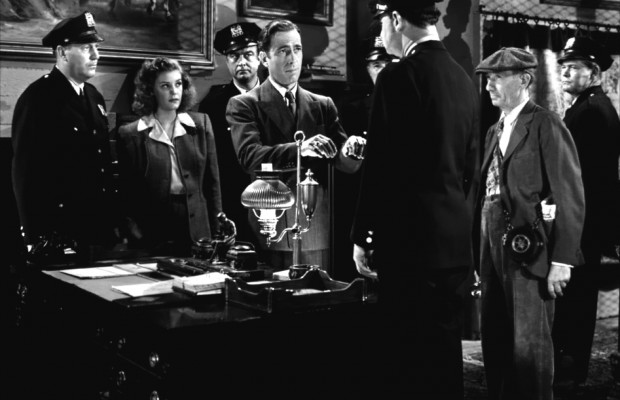 Toronto Film Society presented All Through the Night on Monday, November 4, 2013 in a double bill with The Big Steal, as part of the Season 66 Monday Night Film Buff Series, Programme 2.

In 1941, Warner Brothers producer Hal Wallis brought to the screen UNDERGROUND, an anti-Nazi picture that Wallis himself labeled “propaganda.”  It was a low-budget film

directed by newcomer Vincent Sherman and it did miserably at the box office.  Undeterred, Wallis set to work on what he called “a companion piece”–ALL THROUGH THE NIGHT, also directed by Sherman.  Though both films were clearly anti-Nazi, they differed in the way they approached the topic.  While UNDERGROUND was a gritty melodrama set in Nazi Germany, ALL THROUGH THE NIGHT was an action-comedy about Nazi Bundists in Brooklyn.  It must be pointed out that the film was made (but not released) prior to the bombing of Pearl Harbor.  Obviously, as the war became a reality for Americans, it became increasingly hard to portray the Nazis in such a comic way.  As Bosley Crowther pointed out in the New York Times: “One would hate to think that an enemy plot of such elaborate magnitude as the one presented here should be so completely overlooked by our capable F.B.I. and that the responsibility for licking it should fall upon a semi-gangster.”

The film was budgeted at $600,000, which meant, according to director Vincent Sherman, “that it was an A film and that I was now

definitely a full-fledged A director.  My salary, however, remained the same, three hundred dollars a week, while several A directors were  being paid thousands a week.  I was not happy about it, but I was not disgruntled.  The fun and excitement of working on screenplays, directing actors, and learning about the technique of film made up for any resentment I felt for being underpaid.”

Interestingly, Humphrey Bogart was not the first (or second) choice for the lead.  Bogart had scored with audiences in THE MALTESE FALCON (1941) and HIGH SIERRA (1941), but he was not yet the star he would become later that year, when CASABLANCE (1942) would be released.  Hal Wallis originally

wanted the gossip columnist Walter Winchell to play the lead.  The idea seems bizarre, but Wallis reckoned that the publicity of casting Winchell “would more than make up for any defects in Winchell’s acting.”  In any event, Winchell couldn’t take eight weeks off to make the picture, and so Wallis offered the part to George Raft.  Raft turned it down and so Bogart stepped in.

On loan from MGM, the great Conrad Veidt plays the master spy Franz Ebbing, while Judith Anderson, who had just played Mrs. Danvers in Hitchcock’s REBECCA (1940), plays Madame.  Anderson was making KINGS ROW (1941) for Wallis at the same time and so she had to scuttle between sound stages, changing back

and forth f rom period to modern costume.  Peter Lorre turns in a wonderful performance as Pepi, and William Demarest, whose  comic skills had been so ably showcased by Preston Sturges, almost steals the picture with his pidgin German.  The wonderful Jane Darwell, who won wide acclaim for her portrayal of Ma Joad in John Ford’s THE GRAPES OF WRATH (1940), plays Bogart’s mother.  Leda Hamilton is played by Kaaren Verne, who played the lead in UNDERGROUND and was also working simultaneously on KING’S ROW.  Off-screen, it seems as if love brought the onscreen enemies together, as Lorre and Verne fell in love and were married soon after Lorre divorced his wife, the actress Celia Lovsky.

The cast is rounded out by two Warner Brothers veterans: Barton MacLane, who appeared in seven films with Bogart, but is perhaps vest remembered as General Martin Peterson in TV’s I Dream of Jeannie; and Ed Brophy, the perennial cigar-chewing lunkhead, whose immortality is assured thanks to Disney’s DUMBO (1941); he provides the voice of Timothy Mouse.  And don’t forget to watch closely for a couple of interesting cameos.

According to Sherman, Jack Warner personally telephoned and directed Sherman to put two young comics in the picture.  Their names?  Jackie Gleason and Phil Silvers.  Sherman told Warner he had no parts left, but Warner simply replied: “Well, make some parts.”  According to Sherman, “it occurred to me that Silvers could play a waiter, and Gleason could be another of Bogie’s henchmen.  I asked them to bring me some pages and I’d try to fit them in.  Gleason brought in a page of funny lines and Silvers, nine pages of jokes.  Silvers can be seen briefly in the opening of the film, and Gleason now and then throughout.”

The crazy scene in which Bogart and Demarest confuse the Fifth columnists with German sounding gobbledygook, was not in the original screenplay.  Sherman thought the idea up himself and presented it to producer Hal Wallis.  Wallis hated the idea, but Sherman was so convinced that the film need it, that he shot it anyway.  When Walis saw the scene in the rough cut, he angrily told Sherman to take it out.  Sherman, however, left a bit of it in and when the film had a sneak preview, the audience “exploded with laughter” at the double-talk.  Wallis told Sherman to put it all back in.

The film also features the Johnny Mercer-Arthur Schwartz standard “All Through the Night.”