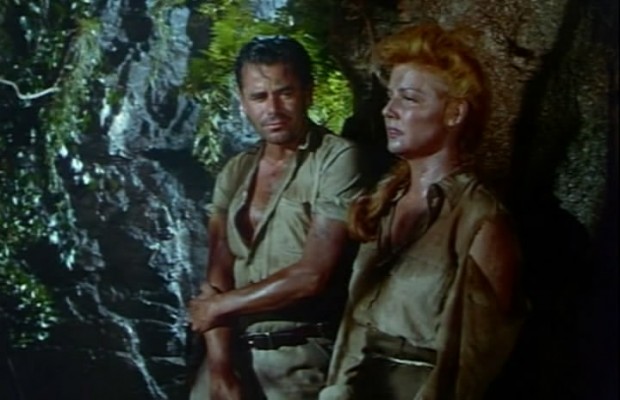 On a tramp steamer off Central America are Mr. and Mrs. Sheppard, five prisoners en route to a Nicaraguan prison, and Corbett, an American carrying money for a Honduran counter-revolution. Denied permission to land in Honduras, Corbett releases the prisoners and with their aid hijacks the ship. They land, taking the wealthy Sheppards as hostages, and start the arduous trip upriver to Corbett’s rendezvous, meeting jungle hazards. Written by Rod Crawford

GLENN FORD (1916-2016) was born Gwyllyn Samuel Newton Ford at Jeffrey Hale Hospital in Quebec City.  Ford’s parents were Hanna Wood Mitchell and Newton Ford and through his father, Ford was a great-nephew of Canada’s first Prime Minister Sir John A. MacDonald.  Ford and his family moved to the United States when he was eight, and became citizens in 1939.

In 1939, Ford was discovered by Tom Moore, a talent scout for 20th Century Fox.  Not long afterwards he signed a contract with Columbia Pictures, which was a major changes in that

studio’s business model.  Back in that day Columbia was used as a means of “punishing” wayward stars for unruly behavior such as salary demands or work refusals.  Columbia would normally sign actors for one time deals, for salaries a lot less than what they normally demanded.   Columbia started changing their way of working in the late 1930s, first signing Rosalind Russell and then signing Ford and fellow newcomer William Holden.   The executives at Columbia figured that the two prospects could be used interchangeably, should one of them become troublesome.

Ford made his film debut in the movie, Heaven with a Barbed Wire Fence (1939), and then continued on with several roles throughout the 1940s.  His movie career was interrupted at the onset of WWII when he joined the Marines.  Ford continued on with his military career in the Reserves well into the Vietnam War, achieving the rank of captain.

After the war,Ford struggled to get back into the Hollywood scene.  He was able to do so with the aid of Bette Davis, who gave him his first real post-war break in the 1946 movie  A Stolen Life.  It was not until he starred in the film-noir Gilda (1946) with Rita Hayworth that he became a major star.  His acclaimed performance earned him accolades in the industry and he is known as one of the most popular actors of his time.  Throughout his career he had several other fairly successful film noir classics including, The Big Heat (1953) and Blackboard Jungle (1955).

Throughout his career Ford continued to make many other notable films but is best known for his westerns such as 3:10 to Yuma (1957) and The Rounders (1965).   In 1978, Ford had a supporting role in Superman, as Clark Kent’s adoptive father, a role that introduced Ford to another generation of movie fans.  Glenn Ford is remembered fondly by his fans for his more than 100 excellent films and his charismatic silver screen presence.

Ford suffered a series of minor strokes which left him in frail health in the years leading up to his death. He died in his Beverly Hills home on August 30, 2006, at the age of 90.

ANN SHERIDAN (1915-1967) was born Clara Lou Sheridan on February 21, 1915 to a mechanic and his homemaker wife in Denton, Texas,   As self-described tomboy, Sheridan grew up amongst five siblings, in a mostly normal childhood environment.  The very athletic Sheridan played on the girls basketball team for the North Texas Teacher’s College and had hopes to enter the teaching field.  One of Sheridan’s sisters entered her a picture of her in a bathing suit to Paramount Studios.   The contest prize was a screen test and a bit part in a movie.  The rest was history, as Sheridan at the age of 19, starred in her first role; Wagon Wheels (1934).

Sheridan performed under her real name of Clara Lou and appeared in 12 more films that year, where she played in roles showcasing her beauty.   During the next four years more of the

same followed with more vapid bit parts, moving from Paramount to Warner Brothers.  It wasn’t until 1938 that the now Ann Sheridan landed her first role of any substance entitled Angels with Dirty Faces (1938).

Given the nickname of the “Oomph Girl”, a name that she detested, Sheridan became known as one of the most glamorous women in Hollywood.  Rex Harrison said of her, “I was struck by her extraordinary magnetism and directness,” and noted that he like her “distinctive quality of earthiness that never transcends to blatant sexiness.”  Her beauty made her a favourite pin-up girl alongside Betty Grable.

Throughout her career, she grew into a leading star who could adapt to any role.  She was able to star in many comedic roles.. many of which were quite forgettable.   That being said, the public loved her, and the critics began to take notice especially after a terrific performance in Torrid Zone (1940) and the saucy waitress in The Drive by Night (1940).   During the 1950s, Sheridan’s career began to decline as the aging star began to lose roles to younger actresses.   Sheridan moved to New York and began to take small roles and acting jobs wherever she could find, including a stint in the soap opera Another World (1964).

Ann died on January 21, 1967, in San Fernando Valley, California, of cancer. She didn’t get to live out her series’ first season. She was 51.