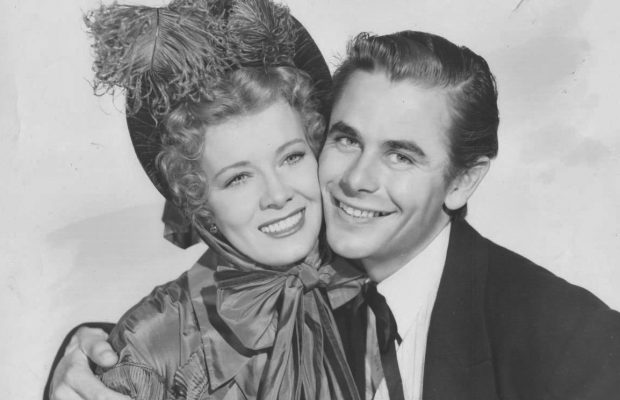 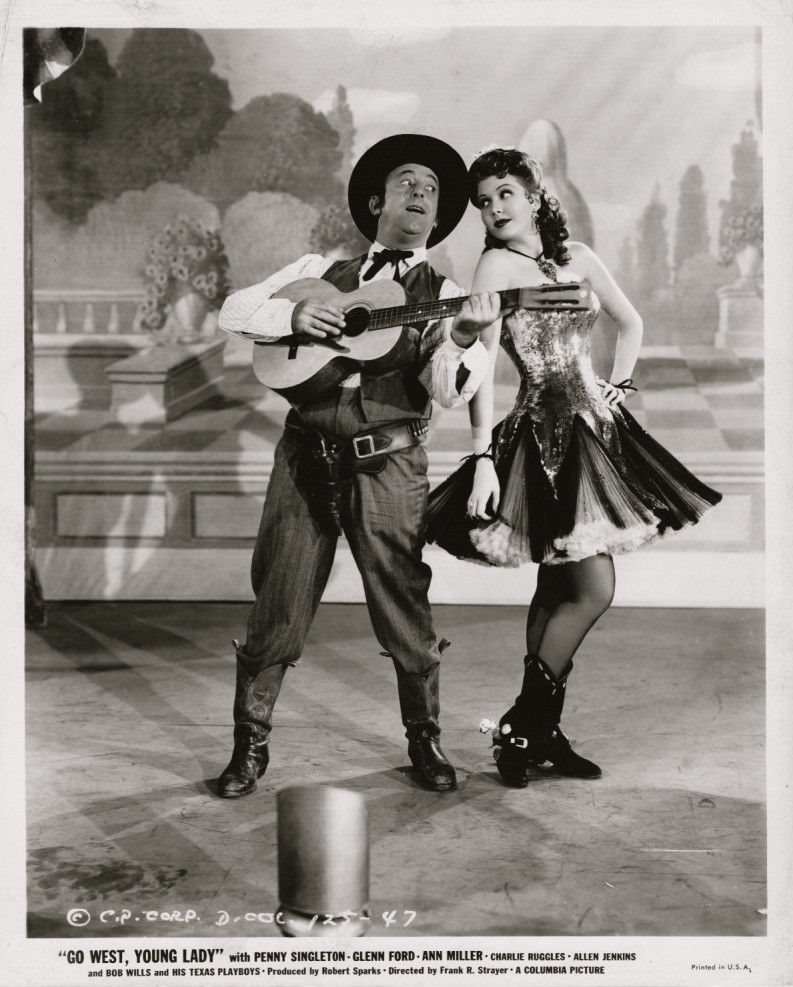 The western musical comedy is not a jam-packed genre, but it was a natural for Columbia. The studio lays at the low-rent Poverty Row end of Hollywood, at Gower and Sunset Boulevard, a neighbourhood called Gower Gulch because of the dozens of small-time studios operating there that produced cheap westerns. Columbia was a small studio with big ambitions, but physically it was just a series of sound stages with no a back lot. Though Columbia liked to consider itself above the neighbours, they weren’t above renting their Western sets and back lots – especially since they were right across the street, and there was no need to drive the cast over.

PENNY SINGLETON was a talented singer and dancer, but is best remembered today as the embodiment of two cartoon characters. She was born Mariana Dorothy Agnes Letitia McNulty in 1908, the daughter of Philadelphia newspaperman Benny McNulty. Her father called her Penny because she liked to collect coins. She got her start in show business as a child, singing accompaniment at a silent movie theatre. After completing grade six, she joined the touring vaudeville act The Kiddie Kabaret. Billed as Penny McNulty, she sang and danced in the act with Milton Berle and Gene Raymond. She made her Broadway debut appearing with Jack Benny.

In the early and mid-’30s, Singleton appeared in several minor films, then billed as Dorothy McNulty. “They threw parts at me that Claire Trevor didn’t want,” she later remembered. Her most prominent role was as a brunette nightclub singer in After the Thin Man (1936). Marriage in 1937 to dentist Laurence Singleton brought her the new last name she used from then on.

Stardom came suddenly, in the unexpected form of a comic strip. She was cast as Blondie Bumstead in the feature film Blondie in 1938, opposite Arthur Lake as husband Dagwood. This hit inspired a series, proving so popular that 27 sequels were made from 1938 until 1950. Penny’s second husband, Robert Sparks, produced 12 of them. In addition to the movies, the same actors also starred in radio’s version of Blondie, which came along in 1939 and also continued until 1950. Singleton was eternally grateful for the part and to its creator, cartoonist Chic Young. She dyed her brunette hair blonde for the rest of her life.

As Blondie inevitably wound down, Singleton turned to other pursuits. She made TV appearances and toured in nightclubs and roadshows of plays and musicals, including Call Me Madam. After being widowed in 1963, she turned her attentions to union activism. In 1966, she led the first strike of the Radio City Rockettes, gaining improved working conditions. She was elected president of AGVA (American Guild of Variety Artists) in 1969, becoming the first woman president of an AFL-CIO union.

Singleton’s extensive radio experience made her a natural for a vocal job that came up in 1962. She played Jane Jetson in the futuristic animated series The Jetsons. The series only ran a year, but it was popular with nostalgic baby boomers, and popular demand meant it eventually proved as lucrative for Singleton as Blondie had been. She reprised the role for a syndicated revival (1985-88) and for many specials and records. Her final film was Jetsons: The Movie in 1990. Singleton died in Sherman Oaks, California in 2003, following a stroke, and was buried in San Fernando Mission Cemetery in Los Angeles. Fans papered her star on Hollywood Boulevard with comic strip images of Blondie and Jane Jetson in tribute.

Incidentally, if it strikes you that she and the dog (Waffles) work well together, it’s because by 1941 they were well practiced. Waffles also played Daisy, Blondie and Dagwood’s dog.

He played the urban sad-sack stooge in so many Warner Brothers films that it’s a bit of a shock to see ALLEN JENKINS singing and dancing over at Columbia. But he was a well-rounded performer with a musical background, born into a family of musical comedy performers in 1900. Jenkins worked in the Brooklyn Navy Yard during World War I, then rejoined show business as a stage mechanic. He studied at the American Academy of Dramatic Arts before launching a long stage career that lasted from 1924 to 1962. His first stage appearance was in a chorus line, dancing next to James Cagney in an off-Broadway musical called Pitter-Patter, which earned him $5 a week, but he worked hard and things were soon looking up. He appeared in such major plays as The Front Page with Lee Tracy (1928) and The Last Mile, in which he replaced an ailing Spencer Tracy – the big break that took him to Hollywood in 1931. His success as a character actor was immediate. He was a founding member of the tight-knit group of Warner Brothers actors known as the “Irish Mafia” – along with James Cagney, Pat O’Brien and Frank McHugh. One drawback to membership was the emphasis on heavy drinking. Jenkins became an alcoholic, but opted to go public with it and was the first actor to speak to the U.S. House of Representatives and the Senate about the subject. He also helped start the first Alcoholics Anonymous programs in the California prisons for women. In addition to stage and films, Jenkins did a lot of television work, including the cartoon voice of Officer Dibble in Top Cat (1961-62). Eleven days before his death in 1974, he made his final appearance – at the end of Billy Wilder’s film The Front Page.