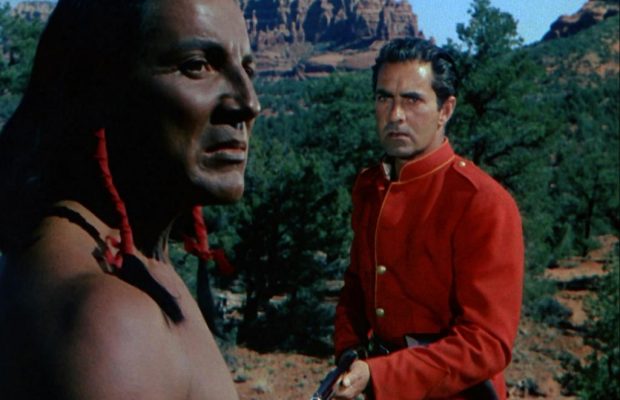 Director Joseph M. Newman made his second feature film, Jungle Patrol in 1948 after working as a director of shorts and documentaries for the previous ten years interspersed with his first feature, Northwest Rangers, in 1942.  In the next thirteen years, he made 24 feature length films, moving into TV where he directed ten episodes of The Alfred Hitchcock Hour, four of The Twilight Zone and one of The Big Valley.

Working his way up from office boy and clerk to writer and assistant director under Ernest Lubitsch and the director of tonight’s second feature, George Cukor, he was briefly assigned to MGM’s British section as a second unit director.

His 1950 film 711 Ocean Drive sounds like an intriguing film noir in which an electronically-minded telephone repairman, played by Edmond O’Brien, becomes entangled with a shady bookmaking syndicate.

But Newman’s most famous film is the 1955 sci-fi cult classic This Island Earth which features clever matte paintings and lush three-strip Technicolor photography.  However, his contribution is somewhat diminished by the fact that nearly half of it was re-shot by director Jack Arnold because the studio was unhappy with the initial result.

Pony Solider is one of many films based on the exploits of the Northwest Mounted Police later the Royal Canadian Mounted Police, the Mounties.

Power is among a stellar alumni of Hollywood actors both A list and B list who have portrayed Mounties.  He joins the likes of Alan Ladd in Saskatchewan (1954), Robert Ryan in The Canadians (1961), Errol Flynn in Northern Pursuit (1943), Howard Keel in Rose Marie (1954) and Brendan Fraser (a Canadian) in Dudley Do-Right (1999).  There were many of B films, serials and television shows featuring the Mounties as well.

Many of these Mountie films could have featured the stars in the blue wool uniforms of the US Cavalry instead of the red serge of the RCMP; they are basically westerns set in Canada.  Candians can set aside their knowledge of Canadian history and enjoy these films for the actors, action, story and play “Spot the Anachronism”.

Pony Solider had a Native American technical advisor, Nipo T. Strongheart, who was critical of the proposed screenplay.  This led to a major rewriting of the script.  Strongheart worked closely with the Cree people to learn their language and the way they had lived during the time period of the film.  He was able to coach the actors and the 450 Navajo extras to bring some semblance of realism to the First Nations aspect of the film.  Strongheart had a role as a Medicine Man in the film.  He had acted in an uncredited role with Tyrone Power Senior in the 1925 film Braveheart.  Power Senior played a First Nations character with the name of Standing Rock.

Strongheart was from the Yakama tribe, born in White Swan, Washington in 1891 with the Anglo name of George Mitchell Jr. His native name was Nee-Ha-Pouw and he took the name Nipo T. Strongheart for his career in Hollywood as an actor and technical advisor on First Nations issues.  He was also a lecturer on First Nations topics and a tireless advocate for the rights of native Americans.  He was responsible for many favourable changes to government policies affecting Native Americans.  He passed away in 1966 and is interred at the Smohalla Cemetary of the Yakama Nation in Washington State.