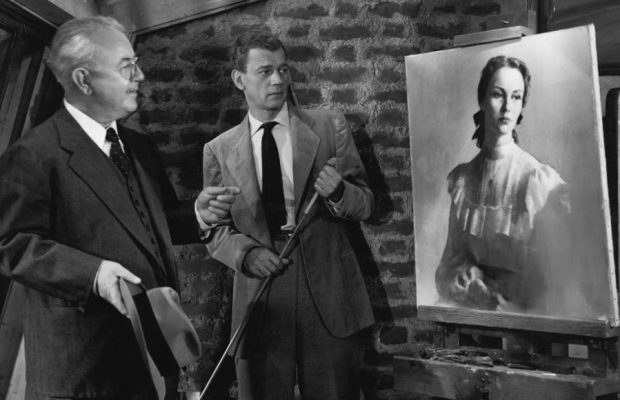 Toronto Film Society presented Portrait of Jennie (1949) on Sunday, February 16, 1986 in a double bill with I’ll Be Seeing You as part of the Season 38 Sunday Afternoon Film Buffs Series “A”, Programme 7.

“An ageless love can cross fronteirs of time and death, and neither time nor space need be a barrier to those who refuse to find them so….”  Such is the essential philosophy of Portrait of Jennie, an affecting study of the supernatural romance between painter Joseph Cotten and spirit Jennifer Jones.  (Spoiler Alert–the whole story and surprise is revealed below.)

It deals with a New York painter, down on his luck in the depressing year of 1932, who despairs because his work lacks depth and pictorial allusiveness.  However, he is encouraged by a motherly art dealer (Ethel Barrymore) who buys several of his water colours but urges him to find new ways of expressing himself through is painting.  Then one day he meets Jennie Appleton (Jennifer Jones), a young girl dressed in old-fashioned clothing, in Central Park.  He finds the encounter a strangely haunting one, and it is repeated over the months from winter through spring into summer, with the young girl maturing into an adolescent and then into a young woman on the verge of college graduation.  Jennie is a charming but strange girl, speaking of things past, her speech and manner reminiscent of another era.  Yet she and Eben, the painter, establish a spiritual intimacy, and soon he is in love with her.

Eben persuades Jennie on one of her unexpected visits to his garret to pose for a portrait, and when he finishes it and shows it to Miss Barrymore and her associate, Cecil Kellaway (John Garfield’s murder victim in 1946’s The Postman Always Rings Twice) they are surprised and deeply impressed by is haunting loveliness and spiritual profundity.

Meanwhile, Jennie, who on her first appearance as a young girl had sung for him a strange song with its only words: “Where I come from, nobody knows; where I am going everyone goes” seems restless and concerned, and there are hints that they will soon be parted.  Eben traces Jennie Appleton, using random information she has given him, back through time, until eventually he learns from the Mother Superior at her college (Lillian Gish), who tells him that Jennie died in a great hurricane in New England in 1924.  Eben then realizes that Jennie is a spirit who has returned to life and that some unknown Fate has brought them together. 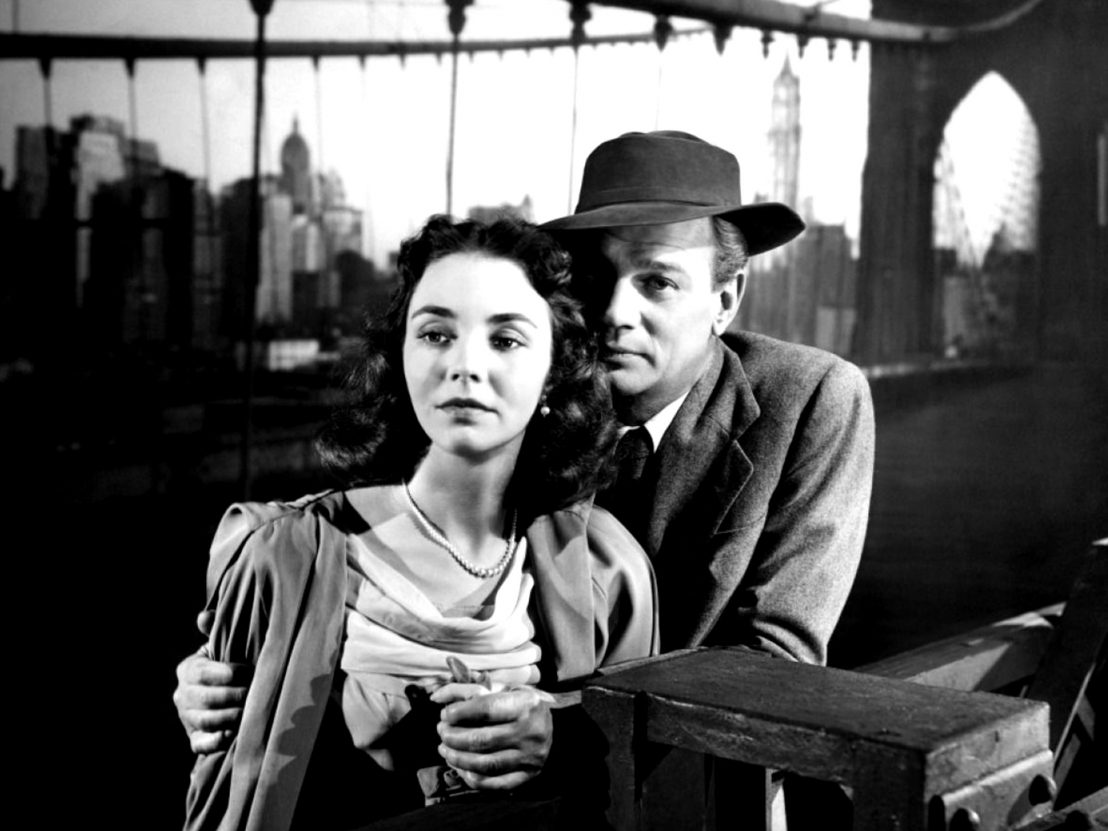 Such a theme, of course, is fragile and delicate in the extreme, and requires the suspension of logic on the viewer’s part.  However, given the skill with which the film is made–particularly Miss ones’ ethereal performance–this is not all that hard to do, and the screenplay skillfully skirts uncomfortable questions of logic or reality.  Perhaps it could be said, “for those with faith, no explanation is necessary; for those without it, no explanation is possible.”

Actually, Portrait of Jennie as a romantic fantasy film is in the tradition of The Ghost and Mrs. Muir, Smilin’ Through and Berkeley Square.  And, in more recent times, 1980’s lovely Somewhere in Time, based on Richard Matheson’s novel Bid Time Return, the story of a lonely and frustrated writer (Christopher Reeve) who travels back in time to 1912 to meet a beautiful actress (Jane Seymour at her most enchanting), whose portrait he had fallen in love with.  Although Matheson based his depiction of the actress on a real-life person, turn-of-the-century actress Maude Adams, the story and film bear similarities to Portrait of Jennie, in terms of the themes of eternal love against a very romantic setting.

In common with Somewhere in Time, Portrait of Jennie is the story of two lovers at the opposite ends of infinity, but whose love will ultimately triumph over death.