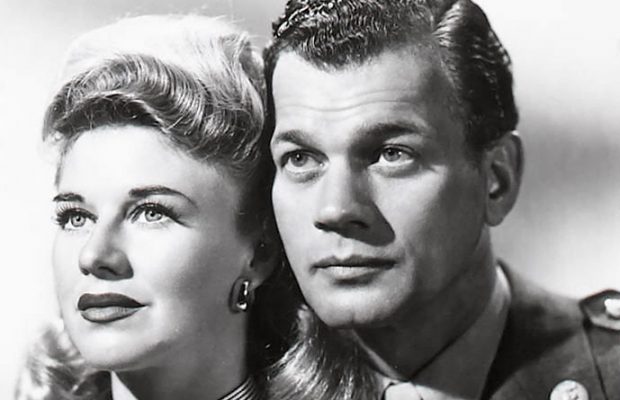 Toronto Film Society presented I’ll Be Seeing You (1944) on Sunday, February 16, 1986 in a double bill with Portrait of Jennie as part of the Season 38 Sunday Afternoon Film Buffs Series “A”, Programme 7.

With victory in sight on the battlefield in late 1944, Hollywood began making films reflecting the readjustment of combat veterans to civilian life in the U.S.  Today’s film has one of its central characters suffering psychological problems from combat, played by Joseph Cotten.  One cannot help but wonder if Cotten’s nightmare scene in his hotel room didn’t inspire a similar scene involving Dana Andres in The Best Years of Our Lives, during his overnight stay in Fredric March’s apartment.  Co-star Ginger Rogers (“Ginger” was a shortening of her given name, Virginia, and it was an apt description of the Missouri-born actress) also portrayed someone with severe problems–when she meets Cotten on a train, she is on a Christmas parole from prison.

As an aside, it’s interesting to think of how many cinematic meetings, romantic and otherwise, took place aboard trains, in the 30’s, 40’s and early 50’s the major intercity public transportation mode.  Alfred Hitchcock even built a whole movie around the meeting of two “Strangers on A Train”.  Today’s scriptwriters are certainly missing a bet by not taking advantage of the dramatic possibilities of train travel.

At any rate, the train ride serves to introduce us to this disparate duo–he, apathetic and listless; she, staring into space with a worried look and nervous manner.  From there, events proceed at a leisurely, logical pace, with Cotten deciding to get off the train at Rogers’ town, and is then invited over to her place for dinner.

It’s interesting to note how so much of the picture, in common with many of the era, takes place in a home, centering around family life–again, an area almost ignored by today’s filmmakers.  If Ginger’s parents look familiar, it’s because both starred on TV shows in the 1950’s–Tom Tully in “The Lineup” and Spring Byington in “December Bride.”  Both were seasoned professionals by 1944 who projected warmth and sincerity as Rogers’ father and mother.

Of course, Joseph Cotten, as always, is a delight to watch and listen to.  His clear, mellow, dignified voice, retaining a trace of a Southern drawl (Cotten was from Virginia) stemmed from years of specialized speech training and experience in stage and radio work–where the voice is everything–before making his film debut in 1941’s Citizen Kane.  One thinks of another Southerner with a superb voice, Dana Andrews, and a former sportscaster from Illinois, one R.W. Reagan, whose excellent diction and delivery were due, in part, no doubt, to their radio experience.  The early scenes at the railroad station and in the train, with Cotten’s voice flat and devoid of any life, bring back chilling memories of “Uncle Charlie”, the world weary murderer in 1943’s Shadow of a Doubt.  A superb actor, Cotten would play heroes, villains, and various types in between with ease.

Ginger Rogers, on the other hand, is more an acquired taste as a dramatic actress, even though she won an Academy Award for 1940’s Kitty Foyle.  Working for her were an ability to project, in certain scenes, warmth and sincerity, but at other times her rather grating, high-pitched voice and nervous stare worked against her, and her delivery could be lacking in smoothness and conviction.  Perhaps also there was a certain personal reserve–Robert Redford comes to mind as a contemporary male comparison–that kept her from getting into her characters, and by extension, through to the audience.  She seems to have been a hardworking, intuitive rather than technical actress–a shrewd, but opinionated and unsophisticated person in real life.

Nevertheless, it was Rogers’ agreement to star in I’ll Be Seeing You (the title came from a popular song of the day) which finally convinced David Selznick to give the go-ahead to the picture, after an on-again period of indecisiveness.

The happy result was the sort of movie which seems to so seldom be made anymore–perhaps Martin Ritt’s current Murphy’s Romance is a contemporary example to fill the voice–about ordinary, decent, believable people, sharing problems and experiencing misunderstandings, joy and heartache, but in the final analysis being a story with characters one can truly care about.  And why can’t Hollywood make more pictures like this?

As a final point, notice how both of today’s films begin with one of the most stylish openings ever to see use in films–the lovely chimes and fanfare, the bough-shaded signpost and Mt. Vernon exterior that introduced a Selznick picture to audiences between 1937 and 1957.  A far, far better way to begin a motion picture than today’s stylized, unaccompanied logos leading off to a black ocean.  Boring!