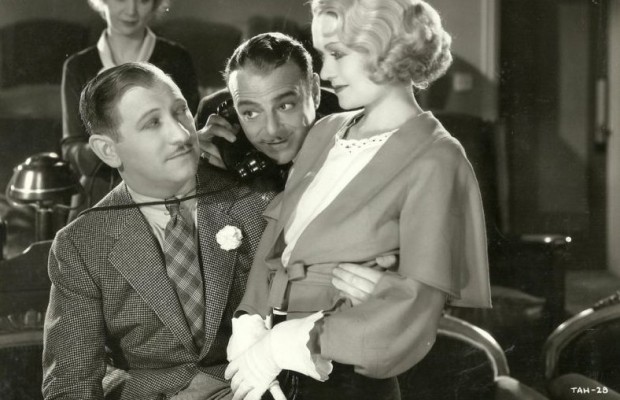 The Toronto Film Society presented What Price Hollywood? on Monday, December 3, 2012 in a double bill with Stand-In, as part of the Season 65 Monday Night Film Buffs Series.

Mary: I don’t think I should have a baby in every picture I do.

Saxe: This one is different – you’re getting married first!

CONSTANCE BENNETT was not the first choice for this role. The producers originally wanted Jazz Age silent star Clara Bow, whose working class background and swift rise to fame as the “It Girl” were similar to main character Mary Evans’. But, by 1932, Bow was beset by enormous troubles. In talkies, she was hindered by her thick Brooklyn accent, so stressed over it that she broke down in tears at the sight of a microphone. She was also plagued by weight gain and increasingly-frequent bouts of mental instability. Bow soon retired and left Hollywood. Much of her retirement was spent in sanatoriums or the quiet seclusion of her husband Rex Bell’s ranch in Nevada. Many years later, when asked to comment about the death of Marilyn Monroe, sympathetic Bow knew what she was talking about when she replied, “A sex symbol is a heavy load to carry when one is tired, hurt and bewildered.”

Constance Bennett’s background was much different than Bow’s, and she was much more resilient. She and her sister, fellow movie star Joan, were the daughters of famous stage and screen star Richard Bennett.

From the cradle, these girls knew show business. Beautiful, well-dressed Bennett was a big star of the early sound era, and she had the sense not to take it too seriously. “I’m a lot more sartorial than thespian,” she joked. “They come to see me and go out humming the costumes.” She sparkled in sophisticated comedies and excelled playing wise and worldly types – often unwed mothers – so producers felt her established film image wasn’t quite “right” for the part in What Price Hollywood?. They just couldn’t picture glamorously risqué Constance Bennett playing a waitress. What they forgot to take into account was that she was also a first-rate actress. She brought much more depth to this role than poor Clara Bow could have. Constance Bennett knew movie stardom inside-out, and she managed to survive it. She retired from films fairly young, preferring to concentrate on her (very successful) business interests.

Movies about Hollywood are inevitably based on compilations of true stories. Sadly, the subject of “Who’s Through in Hollywood” rings truer than any other. William Wellman’s original version of A Star is Born (1937) was based largely on the disastrous Barbara Stanwyck/Frank Fay marriage, but it also used vivid incidents involving the funeral of Irving Thalberg, the steep declines of John Barrymore and John Gilbert and the death of failed actor John Bowers, who drowned himself off Malibu. Made five years earlier, George Cukor’s highly-authentic What Price Hollywood? was also inspired by real-life incidents. The wedding sequence here echoes the frenzied, over-the-top studio-staged nuptials of Vilma Banky and Rod La Roque in 1927. The plot also borrows incidents from the 1922 murder of director William Desmond Taylor, a sensational scandal that destroyed the careers of two popular actresses, Mary Miles Minter and comedienne Mabel Normand (it remains unsolved to this day). But this film also comes with a most unusual, distinct degree of reality. Here, the actor who inspired the sad story actually plays the part. Dipsomaniac director Max Carey was both modeled after and played by actor/director LOWELL SHERMAN.

Sherman was a prominent Broadway actor who came to Hollywood in 1914. He made a big impression as the cad who wronged Lillian Gish in D.W. Griffith’s Way Down East (1920), and adeptly portrayed slick leading men and lascivious villains throughout the 1920s.

He branched out and began directing in the early ‘30s, often acting in the films as well. Among the 15 films he directed were She Done Him Wrong (1933) with Mae West and Morning Glory (1933), which earned young Katharine Hepburn her first Best Actress Academy Award.

Sherman was intelligent, talented and made good films, but he also had a big problem with the bottle. He and his brother-in-law John Barrymore (they were married to the Costello sisters, Helene and Dolores) were legendary boozers and carousers. Their wild binges caused great comment in eternally-gossipy Hollywood. Writer Adela Rogers St. John based her original story on this compelling case of a good director on the skids, and Sherman apparently had no qualms about playing the part. If anyone knew the subject, he certainly did.

This was to be Sherman’s next-to-last film appearance. Despite lifelong alcoholism and riotous living, his pal John Barrymore lived to be 60, but Lowell Sherman’s lifestyle caught up with him much earlier. He died of pneumonia complicated by alcoholism in December, 1934, at 46. He was then directing a very big production: Becky Sharp (1935), the first Technicolor feature-length film. After his death, Rouben Mamoulian took over the direction and Lowell Sherman’s footage was scrapped. He is little-remembered today.

GREGORY RATOFF was also both an actor and director, but his is a happier story than Sherman’s. He was born in Russia, where his law studies were interrupted by service in the Czar’s army during World War I. After the war, he joined the Moscow Art Theatre. He fled Russia during the Bolshevik revolution, going first to France. He came to the United States to perform on Broadway, where he met his wife, the celebrated Russian actress Eugenie Leontovich.

Ratoff became a theatrical impresario in New York, staging productions for the Yiddish theatre in addition to working in English-language theatre. He made his Hollywood debut in 1932. In films, his heavy accent and mangled English (“If she wasn’t so skinny, she’d be considered thin”) made him a primarily comic actor. He played blustery, excitable producers or directors superbly, as in What Price Hollywood? and All About Eve (1950).

Behind the camera, the many films Ratoff directed included Ingrid Bergman’s American debut in the romantic Intermezzo (1939) and The Corsican Brothers (1941), a superb swashbuckler. Gregory Ratoff died of leukemia in 1960 at 63, shortly after acting in Exodus and directing the biography Oscar Wilde starring Robert Morley.

Handsome NEIL HAMILTON’s long career began with shirt modelling. He was one of the classic Arrow Collar men in the 1920s. From there, he moved on to stardom on the silent screen. After prominent roles in silents and early talkies, his career slipped when sleekly handsome ‘20s type became outmoded. The harsh realities of the Depression changed the public’s taste. Rougher leading men, like Gable and Tracy, moved onscreen, edging the well groomed fellows out. Hamilton hung on, making low-budget serials for many years, but it wasn’t easy. His luck changed in 1966, when all that time slogging away in cheap serials brought an unforeseen reward. Hamilton was cast as Commissioner Gordon on TV’s serial-style smash hit series Batman, and he was back on top once more. Baby boomers remember him fondly for this role, and have no idea he was once a major movie star.