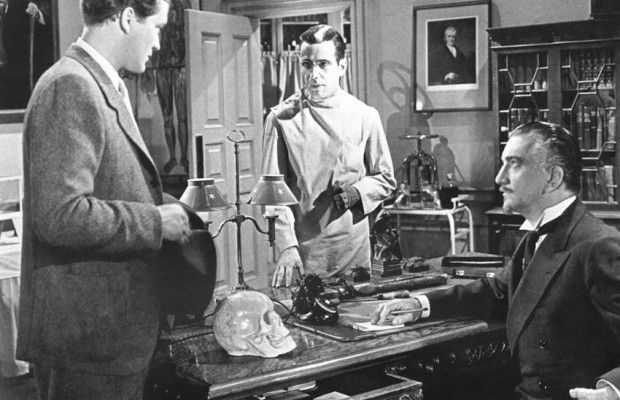 The Toronto Film Society presented The Return of Doctor X  on Friday, November 1, 2013 in a double bill with The Bride of Frankenstein as part of the Season 66 Film Fright Night.

The Ghoul, released in 1933, was the first British horror “talkie.” The Boris Karloff vehicle also had the dubious distinction of being the first film to receive the “H” rating from Britain’s rating system, designating it as “horrific.” Thus began British horror’s struggle for legitimacy within its own country.

One would have expected Warner Brothers, normally alert and attuned to the demands of the current boxoffice, to jump into the new horror market with enthusiasm.  But oddly, only one not very imposing film resulted: 1939’s The Return of Dr. X.  Warners may have been reluctant because they had a big input into the huge British ABC circuit, which took most of the Warner and MGM product, and they may have feared that the British “H” certificate, inevitable for that particular type of film, would deprive it of a profitable circuit booking.  An ambitious horror film on their lines of their previous Dr. X would be short-changed by not receiving a British circuit release; a fairly small and inexpensive one like The Return of Dr. X, however, could still prove useful to the many independent theatres in the country.  By a remarkable fluke, The Return of Dr. X did achieve an ABC circuit booking in England, coupled with the first of Columbia’s new Karloff series, The Man They Could Not Hang, also decorated with the “H” certificate.  However, the fluke wasn’t repeated, and they were the last films with the “H” certificate to play a British circuit.

The main problem with The Return of Dr. X was its lack of style; director Vincent Sherman had had no experience with horror films, and breezed through it as though it was an action picture, using graveyard and laboratory set-pieces as casual props, and accepting without protest a script that had too much bantering comedy and too many characters—including two heroes (reporter Wayne Morris and doctor Dennis Morgan) who just seemed to get in each other’s way.  It had none of the style and craftsmanship of Warner’s last previous foray into the field, Michael Curtiz’s fine The Walking Dead of 1936.

As Warners’ answer to Son of Frankenstein it was a sad letdown, though like most Warner films of the period its sheer slickness and its photographic excellence made it an entertaining diversion.  It was also the first of the new horror films to include a decidedly unpleasant element in  its story: the Dr. X of the title (no relation to Lionel Atwill’s Dr. X) had been experimenting with blood taken from children (who had subsequently died) and, prior to his return, had been executed for that crime.  In retrospect the film has achieved some added interest due to the pallid makeup of the near bloodless Dr. X as played by Humphrey Bogart.

Jack Warner had the nasty habit of punishing errant actors (those who had the audacity to rebel against bad scripts and who wanted salary increases) with ghastly two-bit films like The Return of Doctor X.  Bogart fell easy victim to his childish vengeance.  In this futile attempt to cash in on the success of the studio’s earlier horror classic, Doctor X (1932), Bogart was an executed murderer who was brought back to life to finish his existence as a vampire.  Wearing pasty-faced make-up and a white streak in his hair, he was absolutely ludicrous as he smirked through scene after scene seeking to drain Type-One blood from a bevy of studio starlets in this journey into complete tastelessness.

With the last horror film of the decade, The Return of Dr. X (neither a sequel to nor a remake of the 1932 Dr. X), the ‘30s cycle ended not with a bang but with a feeble whimper.  John Litel was the usual doctor experimenting with blood to revive the dead.  His first success is the recently executed Humphrey Bogart, who requires a particular type of blood to keep alive—hence everyone with that type disappears from a hospital.  Litel himself is murdered, but not before he reveals the truth about Bogart.

Through horror films of later decades, thanks to the end of censorship, the use of color and other technical devices, may produce more violently jolting shocks, achieved by effects more bloodcurdling, revolting or downright nauseating than were permissible under the Production Code, to the true horror buff nothing will ever equal, much less surpass, those classic chillers of the ‘30s.

The resuscitation of the dead is a cinematic commonplace these days; the real problem is to get the boys to do something dramatically constructive after you have got them out of the trenches. Once they return from that bourne from which the traffic grows more congested daily, they usually tend to lead a life of crime, and to look like something which has literally been dug up. Humphrey Bogart—an interesting new face among the posthumous fraternity—is no exception in “The Return of Dr. X,” at Loew’s Criterion, and neither, for that matter, is “The Return of Dr. X.” Languid, hollow-cheeked, and pallid, the doc would certainly never take any beauty prizes, a fact which somewhat complicates his need for young, attractive blood donors like Rosemary Lane.

Of course there are other people than Rosemary involved in Dr. X’s dilemma: there is that intrepid newspaper man, Wayne Morris, with the offensively tilted hatbrim; there is that stern and vaguely sinister blood specialist, with his array of spectacular laboratory gadgets, Dr. John Litel; there is the macabre dancer, Lya Lys, who dies, yet doesn’t die. All in all, you’re going to find “The Return of Dr. X” a cheerful little picture, of which the humorous high spot, no doubt, is when Wayne and his interne friend, Dennis Morgan, exhume what turns out not to be the doc and then comically leave the hole to be filled up again by the cemetery watchman. A very funny scene, that.