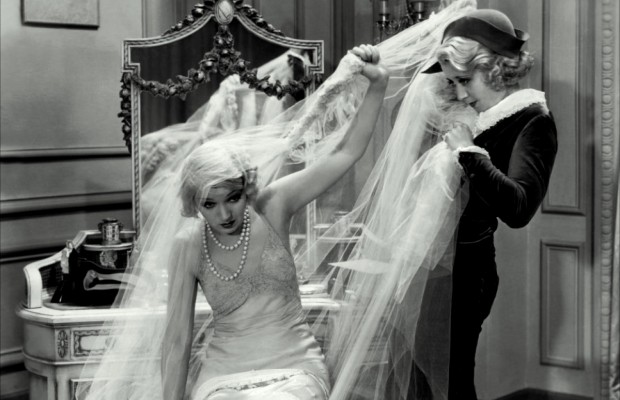 Toronto Film Society presented The Greeks Had a Word for Them on Friday, May 10, 2013 as part of Season 66 May Festival: The Pre-Code Weekend.

Born into a theatrical family, Lowell Sherman started out as an actor before he began directing films in 1928.  He died in 1934 at the rather young age of 46 of pneumonia and would best be remembered in the role as the seldom-sober director Max Carey who befriends Constance Bennett and makes her a star (precursor to A Star is Born) in the film What Price Hollywood? which TFS showed this past December.  Out of the 15 films he directed between the years 1928 up until his death in 1934, we are showing three this weekend.  You will also get a chance to see him as Boris Feldman (no relation) in this film.  This story was adapted from a Broadway play by Zoe Akins and was called The Greeks Had a Word for It.  Since it dealt with a group of modern-day courtesans, shall we say, the title was on the Hays Office banned list.  Therefore, the last word in the title was changed to “Them” to get around the Code.  However, I think that makes it sound even more salacious.  It was retitled for television under the name Three Broadway Girls.

Stage production of ‘The Greeks Had a Word for It’ started mildly, handicapped by a panning from the metropolitan critics.  It then developed into one of the hits of the season.  It’s an interesting

experiment on the screen in that it’s one of the first attempts to put over a smart bit of wit for feature length.  Belief is that the picture will register better than satisfactory on its shrewd play for feminine interest in its subject matter and exploitation.

Likewise it’s one of those peculiar stories, nearly always by a woman, in which the not-too-good heroine eats her cake and has it too, and for the femme trade that formula is generally and almost fool proof.  Exploitation is emphasizing the Chanel clothes.

Wit of the dialog may be a bit polished for the proletariat, but the basic human humor of the situations of these three lilies of the field in rivalry, in battle and in comradeship will register universally.  The men won’t care for it much, but flap and matron will adore its flashy sophistication, certainly in the key towns, even if the whole thing may prove a bit high for the neighborhoods and rural spots.

Contrary to advance trade opinion, the picture is an example of inspired casting, from Miss Claire as the predatory and vixenish Jean; Joan Blondell, the belligerent but loyal Schatze, and Madge Evans as the sympathetic Polaire, not forgetting the especially happy choice of David Manners for the role of Dey, the somewhat sappy, but altogether young, likeable playboy.  The screen hasn’t seen a neater bit of cast teamwork in many a moon with Miss Claire, the vindictive gold digger, and Miss Blondell, the battler with the baby stare, to supply the rowdy comedy, and Manners and Miss Evans to contribute the curiously twisted but engaging romantic interest.

Film stands upon its laughs primarily, but it has many other angles.  For one thing, it is a direct reversal from the feminine side of the McLaglen-Lowe love-‘em and leave-‘em technique, and from the first to the last an opulent spoof at the male gender on the make.  That’s an added attraction for the girls.  And if the censors get out of hand around the country, the Goldwyn could pull some such deadly parallel on them.  This trio of cheerful wenches are just as socially and morally right as the Marines and equally as amusing.

The dialog crackles with swift comedy, with a high spot in the scene where Jean, newly raised to wealth and grandeur, addresses her French maid in atrocious French, while the other two girls

comment sarcastically, half in real scorn and half in uncontrolled envy, the while Jean preens in triumph.

The big share of the comedy goes to Miss Claire, reverting from her screen real lady type to her stage ‘Gold Digger’ days, carries it off with high spirits and a certain flamboyance that is most effective.  Miss Blondell makes a foiling role stand up on its own, getting exactly the right one of restraint and vigor into the part, and Miss Evans handles her assignment with a nice degree of underplaying.  An oddity will likely be Miss Blondell’s name meaning more to the film fans than Miss Claire.

With the Samuel Goldwyn cycle reaching its conclusion at the Museum of Modern Art, we felt it would be a good idea to bring back this delightful early Goldwyn talkie, not included in the Museum’s program.

A fast-paced comedy of three girls on the prowl (it was one of several sources from which “How to Marry a Millionaire” derived), “The Greeks Had a Word For Them” literally oozes the spirit of the early thirties in its brittle and zippy comments on manners and morals, its reconstructions of smoky speakeasies, and in its very much period dialogue.  (“Let’s all have a little drinky!” is one of the most oft-repeated phrases).

The film doesn’t make too conspicuous an attempt to conceal its stage origin, but frequent changes of venue, slick editing, and some sweeping crane shots from cameraman George Barnes, keep the whole frolic nicely on the move.  A very much cut and censored version has been shown—somewhat infrequently—on television under the title “Three Broadway Girls”; our version, we’re happy to say, is not only complete and uncut, but a fine, brand new print into the bargain.

Lowell Sherman reminds us once again what a polished performer he was—and after our rhapsodic comments on Madge Evans in our notes for “Hallelujah I’m a Bum!” we’ll just add that she’s even more delectable in this one!  Joan Blondell too, is at her snappy, early-30’s best!

Incidentally, if you listen to the background music carefully, you’ll recognize snatches from the scores of “Whoopee” and “Reaching for the Moon”—and some of the décor in Sherman’s apartment turned up later in Madge Evans’ apartment in “Hallelujah I’m a Bum!”  (Richard Day was the art director on both pictures).

A faced-paced comedy of three girls on the prowl (it was one of the key sources from which the Fox trio Moon Over Miami, Three Little Girls in Blue and How To Marry a Millionaire sprang), The Greeks Had a Word For Them was produced in 1931, and released the following year. It’s typical Cinderella-depression fare, cynical enough to present its three heroines as amoral gold-diggers, yet sufficiently aware of basic public appeal to have the most attractive of the three girls reform, although still permitting her to land her millionaire!

It literally oozes the spirit of the early 30’s—partly as they really were, and wholly as the movies of the period had us believe they were — in its brittle and zippy comments on manners and morals, its careful reconstructions of smoky speakeasies, and in it’s very much authentically in period dialogue. “Let’s all have a little drinky” is one of the most oft-repeated phrases.

The film doesn’t make too conspicuous an attempt to conceal its stage origin, but frequent changes of venue, slick editing, and some nice sweeping crane shots from cameraman George Barnes — plus an effective and ironic use of the iris-out device—keeps the whole frolic nicely and filmically on the move. A very much shortened and censored version has been shown on television somewhat

infrequently, usually under the title Three Broadway Girls; our print we’re happy to say is both in fine condition and complete.  Lowell Sherman reminds us once again what a polished performer he was—and what an accomplished director of sex comedy, whether it be sophisticated fare, as in today’s film, or the out-and-out bawdy farce of Mae West’s She Done Him Wrong. And after rhapsodising over the charm and loveliness of Madge Evans in Hallelujah I’m a Bum just a few weeks ago, we’ll just add that she’s equally delectable here. Joan Blondell too, is at her snappy, lingerie-clad, early 30’s best!

THE GREEKS HAD A WORD FOR THEM, Samuel Goldwyn production and United Artists release.  Directed by LowellSherman.  From stage play of same name by Zoe Akins.  Adaptation, Sidney Howard; photography, George Barnes.  Gowns by Chanel and so advertised.

Madge Evans plays Polaire, the girl who surrenders to love at the final moment.  At least, one suspects that she will; but one never can be certain what these fair creatures will do, for Jean, played by

Ina Claire, leaves her old bridegroom-to-be waiting with a host of friends, while an orchestra is playing the wedding march, and off she goes to the steamship bound for France.  It is true that before reaching this decision she talks the matter over with her two friends and they imbibe several “little drinkies.”

Joan Blondell, who played in “Union Depot,” impersonates Schatze, the third of the silk-stocking musketeers.  A most humorous episode is that in which they discover that they have each had an affair with an unseen individual, familiarly known as “Pops,” who after his death leaves part of his will on a phonograph record.  Jean, who turns up at the lawyer’s office in deep mourning, discovers that she was not in the old man’s favour at the time of his passing away.

When essaying a conquest Jean prefaces her attack on the victim’s purse by saying: “Where have I met you before?”  This is followed by a few favourable words about the man’s physiognomy, and in ninety-nine cases out of a hundred he is hooked.

Art is perhaps the last thing in which this trio of champagne-drinking blondes are interested.  Lowell Sherman, who directed this film, also appears as Boris Feldman, a pianist of renown.  He wagers that he can make Jean fall in love with him by playing to her, but the mercenary blonde finds it difficult to keep awake while Feldman is playing the piano.

David Manners portrays Dey Emery.  Between spats he is in love with Polaire, who is not quite as wild as her two companions.  Phillips Smalley handles the part of Dey’s father, who becomes smitten by Jean’s pat remarks and her big blue eyes.

It may interest female patrons of the Rialto to know that the gowns worn by the three gold-diggers were designed by Mlle. Chanel.  Miss Evans is pretty and quite capable.  Miss Blondell and Miss Claire keep the merriment bright.  Mr. Sherman gives a smooth performance and Mr. Smalley adds to the general gayety of the piece.