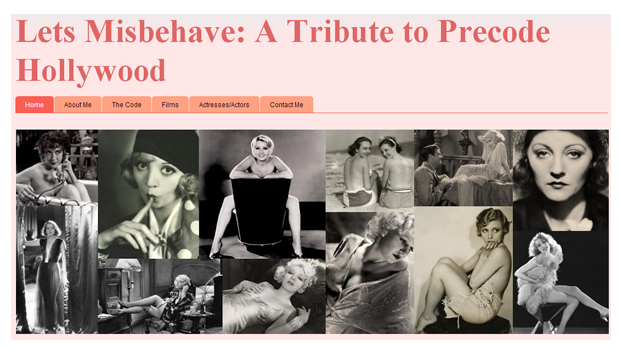 Good morning everyone.  Welcome to Toronto Film Society’s 66th season and second May film weekend held in Toronto.  It’s wonderful to see you all here.  I believe you are going to enjoy this pre-Code film weekend very much!  Pre-Code have to be my most favourite era of films and I’ve loved them since I was a kid without even knowing what they stood for.

In those days, I loved watching pre-Code films just because the female stars were so gorgeous, sophisticated and wore fabulous clothes.  The men were more handsome and at times more youthful looking than the “young men” who played in later films.  The indoor sets were usually beautifully designed with lots of art deco furniture.  But when I started understanding why the stories were so much more risqué and unusual, I adored them even more.

Lately, I’ve been wondering what it would have been like if there had been a parallel universe and the Production Code never came into being on July 1, 1934.  How would men and women’s roles have evolved?  Would the ideas in films continue to influence politicians and politics in different directions?  Even though events in history would have probably stayed the same, such as the 2nd World War, would women in particular have been recast into the roles they played in the 1950s both in film and in real life?  Although many of the films depicted men as gangsters and women as prostitutes, they could still be heroes and heroines, even virtuous for that matter.  Women, in particular, had a much wider range of roles before the Code.  For instance, in some of the films this weekend, you will see women who are in intimate relationships with men who don’t actually want to get married.   They are worried that marriage will make the relationship dull or that it could affect their careers.  It is the men who are looking for the committed relationships.

Because pre-Code existed alongside the beginning of the Depression, these films on one hand represented what people were going through as well as help them to escape from some very hard times.  The stories could be gritty because that’s how life felt for the masses during the Depression.

I just finished reading a very interesting book by author Mick LaSalle called Dangerous Men, the companion book to his Complicated Women.  I liked what he wrote because he agreed with a lot of what I thought!  Seriously, he articulated his ideas well and understood the times with which the films were made.  Permit me to give a lengthy but insightful quote of his thoughts on pre-Code film:

So why go back to the movies of the pre-Code era?  What’s the point of discovering and watching these films all these years later?  The questions are valid.  After all, we’re talking about a brief period that ended nearly 80 years ago.  Most of the films are unknown and don’t even attract nostalgia buffs, since there’s nothing drippy or sentimental about them.  Indeed, the kick of pre-Codes is the opposite of nostalgia.  Watching them, we don’t search for the past in the present.  Rather, we discover the present in the past.

There’s pleasure in that and also utility.  Watching a vanished era expressing itself honestly brings a sense of privilege, as well as an almost eerie recognition that yours wasn’t the first generation to be confronted by this or that feeling or situation.  To see a moment on-screen so alive you can’t believe it is to be, in a small way, assured of the value of moments in the face of time.  Yet the very vividness of the pre-Codes also emphasizes a warning:  Even vitality such as this can be squelched if a close-minded faction is obsessed, pernicious, and willing to organize.

All entrenched power depends on the illusion of unity to suppress dissent at the source, to make anyone who has the impulse to question authority feel odd, surrounded, or powerless.  Simplistic dogma is offered as revealed truth, but inevitably it will collapse in the face of sophisticated thinking or even good old common sense.  Pre-Code movies applied sophisticated thinking, honest observation, and common sense to the turbulent America of the early thirties and said things that are not usually said—that war is hell, that governments lie, that officials are corrupt, that it’s every man for himself, that to be honest and courageous sometimes means fighting the system or subverting it.  These may be healthy things for individuals to know, but they aren’t what governments like to see pumped into the public consciousness.  So when fanatics drove honesty off the American screen, no politician, Democrat or Republican, did anything to bring it back.

Movies reflect culture but also affect it, and we can never know for sure which is influencing the other more.  Still, it’s safe to say that the censors achieved their goals.  Some social progress that seemed inevitable in the early thirties was stalled for decades, a fact we can attribute to a number of factors.  At the very least, movies of the Code era did their part to keep everyone a happy cog in the machine by encouraging chastity and conformity and by reminding men and women of their place.  For a while, it seemed to work.

It doesn’t take much to see that movies made under the Code would have been better had the Code never come about.  To encounter pre-Code cinema is to wonder if America might have been better, too.  A society that is honest in its critique of itself is a society that maintains its aspirations for itself.  For all their movies’ cynicism, the dangerous men and complicated women of the pre-Code screen assumed they had the power to change their circumstances—and they had the force and the feistiness to manage it.

They represent an aspect of the American character that should never have been suppressed and would be a tragedy to lose.

One more thing before the first film is introduced.  Usually I suggest not to read the contemporary reviews before you’ve seen the film because they can give everything away.  However, since these are not murder mysteries, or even if there are murders, they are not who-dun-its, the review actually gives us some information that is interesting to look out for while watching the film.  And, as in the past, I have included TFS’s friend and patron, the late film historian William K. Everson’s program notes on the films as he sees them in a different light than the critics do and he never gives anything away.