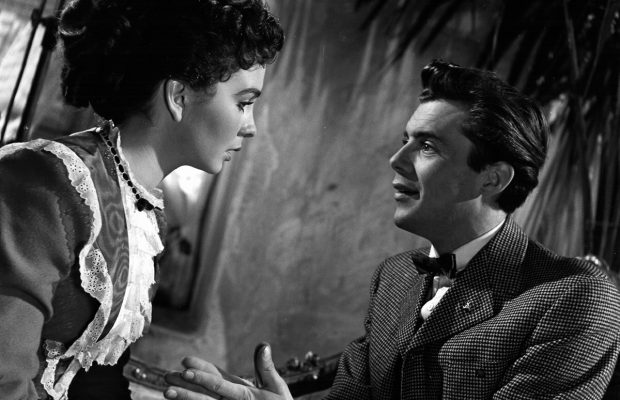 Toronto Film Society presented So Long at the Fair (1950) on Monday, November 24, 1987 in a double bill with Pink String and Sealing Wax as part of the Season 40 Monday Evening Film Buffs Series “B”, Programme 3.

In So Long at the Fair, we have an excellent example of the British mystery.  Here is what starts out as a seemingly uninteresting event.  In 1889, an English borther and sister (Tomlinson and Simmons) arrive at a Paris hotel from Marseille on one leg of their continental trip.  They register in rooms reserved for them, dine, see the sights and then retire.  However, it is here the story veers from the norm!!  The next morning, Victoria Barton, ready for a tour of the festive city is puzzled to discover that not only is her brother missing, but also, there seems to be no trace of his ROOM….

Writers Thorne and Mills did not invent the plot and its unusual but plausible resolution.  It has been popularly re-told by several writers since the age of Victoria.  But as The New York Times reviewer says of the film version, “It is a well told and intriguing tale which has stood the test of time from gaslight to klieg light.” 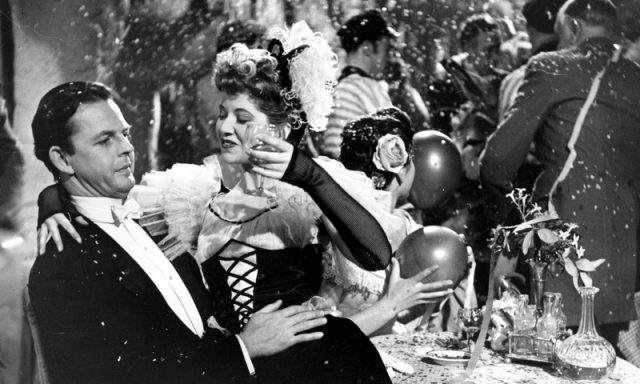 The New York Times describes the performance of Jean Simmons in the film as “not only plausible, but giving the role beauty and dignity as well”.  Jean Simmons as born in London in 1929, but became an American citizen in 1956.  She made her film debut in 1945 in the British film Give Us the Moon.  Her contract with J. Arthur Rank began in 1946, and brought her to international attention with films including Great Expectations and Olivier’s Hamlet.  Her performance in Hamlet earned her the Best Actress award at the Venice Festival in 1948 and the Academy Award nomination as Best Supporting Actress the same year.  She was also nominated as Best Actress in the 1969 Academy Awards for her role in The Happy Ending.  Robin Wood writes: –It was (Otto) Preminger in Angel Face who first realized fully the complexity of her potential.  He also has high praise for her work in The Actress and ranks these two films along with Elmer Gantry s the peak of her screen achievements.

Dirk Bogarde who was born Derek Jules Gaspard Ulric Niven van den Bogaerde (try to put that on a marquee!) was born in London in 1921.  In  1947, he signed a multi-year contract with J. Arthur Rank, and was really only in the early stages of his long screen career at the time of So Long at the Fair.  His career has varied from the very light comedy of Dr. Simon Sparrow in the “Doctor” series, in 1954, to the cunning, crafty portrayal of Hugo Barrett in The Servant in 1963, which won for him the British Academy Best British Actor Award.  Roger Manvell capsulizes Bogarde’s career as one which is the classic case of a gradual rise from light and undemanding roles to those that have required the highest level of subtlety.  Bogarde, in private life, has remained a quiet and retiring person.  Manvell cites his performance in Victim, the first British film to deal seriously with the problem of a homosexual in public life, as one which brought him new stature.  But, the public recognition of his true excellence as an actor came when he teamed with Joseph Losey to play the key role in The Servant.  In that assignment, when Losey became ill with pneumonia, Bogarde took over direction of the film.  In the recent years, he has taken up writing, turning out novels, and three successful autobiographies.

Director Terence Fisher was born in London in 1904.  His first directing opportunity did not come until 1948.  In 1952, he joined the Hammer company, and was an integral part of the string of low-budget, high-profit horror films turned out in the late 50’s and 60’s.  The Hammer Company noticed.  Fisher died in 1980, but had attained the status of a cult director, for his work in horror films.

Co-director Anthony Darnborough (born in 1913) has more credits as a producer (Quartet, Trio, and Encore) than a director.  With Fisher, he also co-directed Noel Coward’s The Astonished Heart.