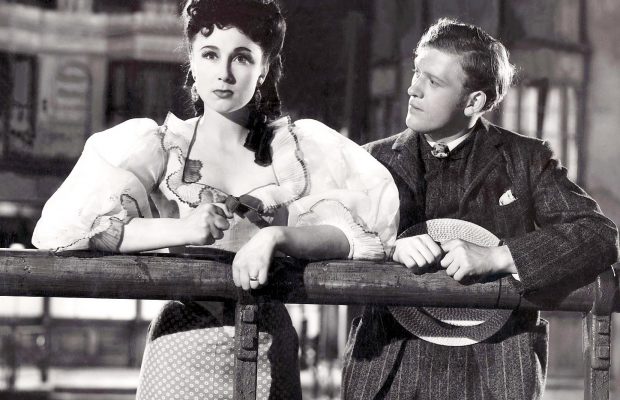 Toronto Film Society presented Pink String and Sealing Wax (1945) on Monday, November 24, 1987 in a double bill with So Long at the Fair as part of the Season 40 Monday Evening Film Buffs Series “B”, Programme 3.

Tonight’s programme consists of two British melodramas set in the late Victorian Age and released in North America in 1950 (though Pink String and Sealing Wax had been made and released in Britain five years earlier).  Both films rely heavily on their sets to create their period atmosphere, but the Brighton of our first film of the evening received considerably more praise from the critics of the time than did the sets constructed for the Paris of So Long at the Fair.  The rather curious title of Pink String and Sealing Wax refers to the materials with which one of the film’s central characters, an apothecary, carefully wraps his packages.  This gentleman brings a similar concern for order and discipline to all aspects of his life, and most especially to the running of his family’s life.  A parallel story concerns the raucous goings-on of a pub owner’s wife with an ample bodice and an overabundant lust for many aspects of life.  The apothecary’s son eventually brings the two stories together, and the film becomes increasingly grim.

Some critics of the period complained that the film took too long to unite the stories, suggesting that this may have been the fault of the original West End play from which the film was adapted.  But all had praise for the performance of Googie Withers as the busy leading-lady.  This talented actress (born Georgette Lizette Withers in 1917) made her stage debut in 1929.  Her film credits include The Lady Vanishes, Dead of Night, Miranda, and The Magic Box.  On the London stage, she was a wonderful Gertrude to Michael Redgrave’s Hamlet shortly before semi-retiring to Australia with her actor husband John McCallum in the late 1950’s. 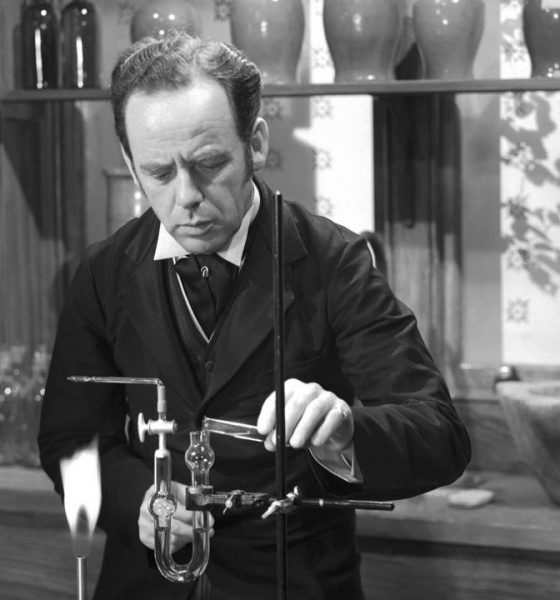 The Welsh actor Mervyn Johns, who plays the apothecary, is a familiar and reassuring face to fans of both British and American films.  He has appeared in Jamaica Inn, Dead of Night, Captain Boycott, Quartet, The Magic Box, The Horse’s Mouth, The Sundowners, The Victors, and Kill and Kill Again, among countless others.  The actress Glynis Johns is his daughter.

Sally Anne Howes (born in 1930) was also in Dead of Night.  She gained her greatest fame as Julie Andrew’s replacement in “My Fair Lady”.

The career of director Robert Hamer (1911-1963) has been compared to that of Preston Sturges.  In the case of both directors, their wit and irony won them immense acclaim before both their talent and their popularity faded with astonishing rapidity.  Hamer’s fame arose primarily from the success of the Alec Guinness black comedy Kind Hearts and Coronets (1949), as well as from the haunted mirror story from the earlier Dead of Night.  It was thanks to two later Guinness films, Father Brown (1954) and The Scapegoat (1958) that he continued to earn respect before metaphorically drowning in a sea of alcohol.