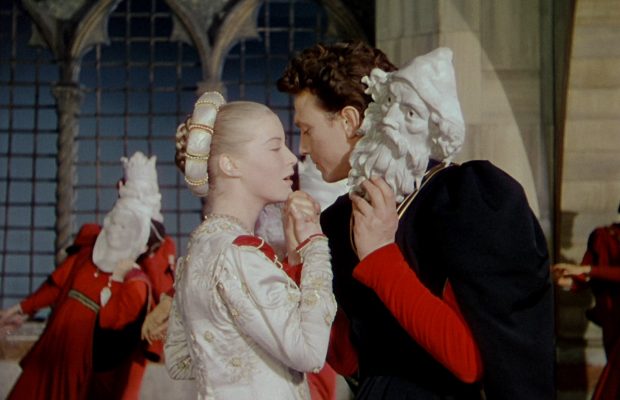 Toronto Film Society presented Romeo and Juliet (1954) on Monday, July 5, 1982 in a double bill with Jeremy as part of the Season 35 Summer Series, Programme 1.

“Renato Castellani literally gives Shakespeare a kingdom for a stage…photographed by Robert Krasker in the golden remnants of the High Renaissance in Verona, Venice, Sienna, and other Italian cities.  Leonor Fini’s fabulous costume designs are derived from Piero della Francesca, Pisanello, Carpaccio and Fiorenzo di Lorenzo.  Amongst these visual splendors, it seems pointless to worry about the loss of Shakespeare’s dramatic rhythm: the film, it is true, is not a great performance of the play–but can there be a great performance of ‘Romeo and Juliet’?  This film provides more sense of what the play is about than conventional stage interpretations.  You may achingly long to be at the Capulet’s ball when the boy sopranos begin to sing and the sensual atmosphere of masks, colour, violence, and elegance fatally encompasses the boy and girl who, all in a moment, meet, love, and quiveringly touch.  Laurence Harvey (at twenty-six) is Romeo and his readings are often exciting and alive; the Juliet, twenty-year-old Susan Shentall, is lovely, but lacks voice and presence.  There are sudden miracles in this production–like the way Mervyn Johns transforms tiresome old Friar Laurence into a radiant, divinely silly little man; and the miracles of sight and sound–the clanging of the great church doors, the sudden recognition that the servants carrying food are right out of Botticelli, or that, dressed by Fini, a big lug like Bill Travers is a Benvolio that Italian painters might have fought over.  This Romeo and Juliet is part of a glorious, voluptuous, poisoned age.” – Pauline Kael 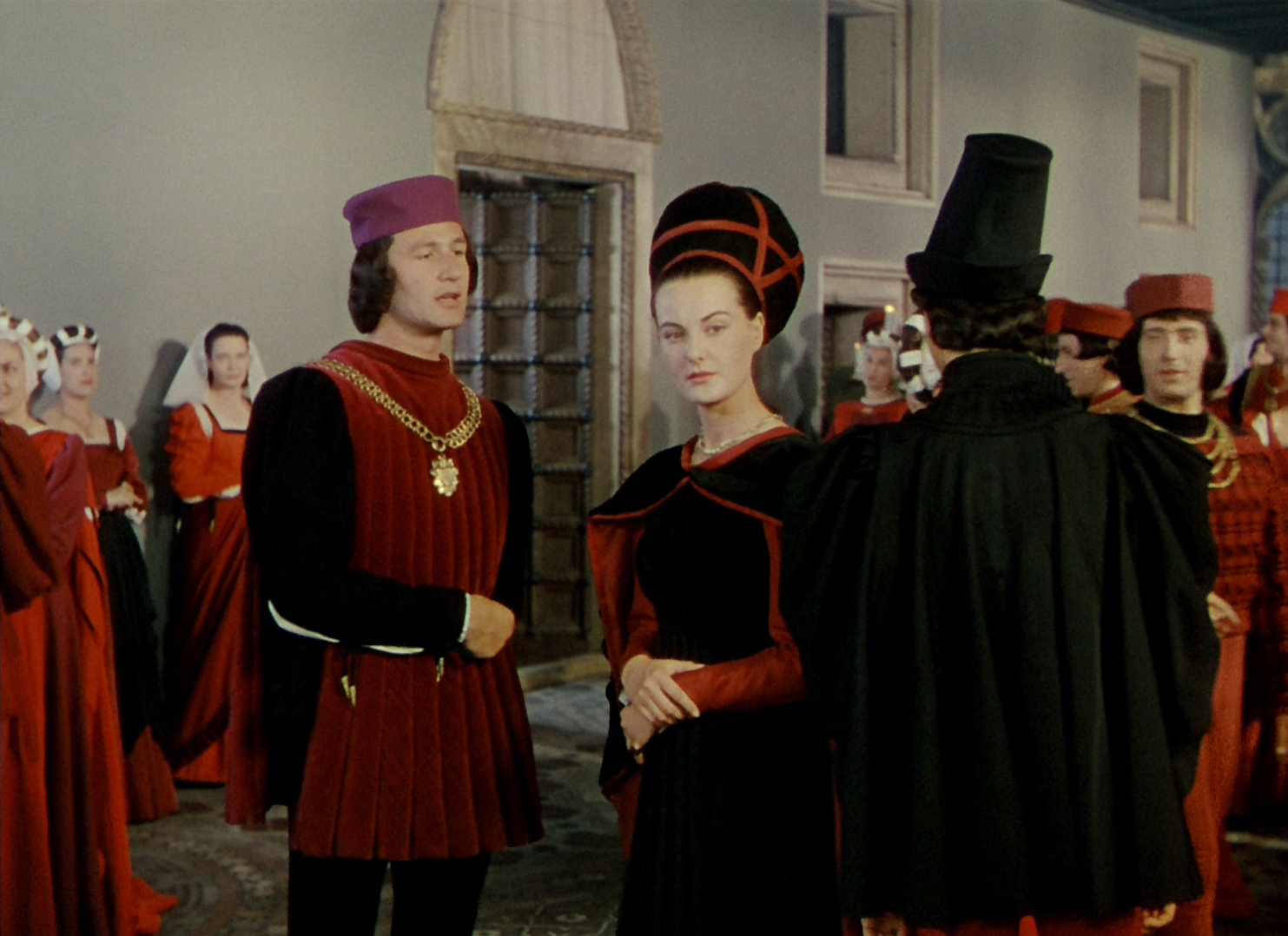 “The audience at the Venice Film Festival of 1954 who rose to acclaim the first showing of Castellani’s Italiante version of Romeo and Juliet were not applauding it because it was Shakespeare.  They saw it as a splendidly colourful reincarnation of fifteenth century Italy in Technicolor, the period to which the play was moved forward so that the more splendid resources of art could be drawn upon for costumes, settings and locations.  In this they were right–the film is nothing if not fifteenth-century Italy brought to highly active life on the screen.  It was inevitable it should win the Grand Prix that year at Venice.  The story of Romeo and Juliet, or rather of Juliet and Romeo (the Italian title for the film is Giulietta e Romeo), is as well known in Italy as Shakespeare has made it in Britain, and there were few present in the audience at Venice who cared one way or the other whether the film kept reasonable faith with Shakespeare.

“Castellani was quite frank about it.  At a meeting organized in London by the British Film Academy, he admitted with unabashed frankness that where a scene needed for continuity might be lacking in the play…he was quite prepared to supply one–though ‘additional dialogue by Renato Castellani’ was not included among the credits.  Anything which held up the essential action was as far as possible pruned away; lines were cut without attention to rhythm, and speeches (regardless of their ‘fame’) were quite simply lost.  Whole scenes were dropped.  On the other hand, many changes of scene had a new beauty of their own.  The marriage of the young lovers is seen through an iron grille, while a mass is being sung in the background.

“With so much attention being paid to decor, it is small wonder that few people concerned with production seemed to bother with the script…Susan Shentall had been cast because she was the right age, and, in costume and make-up, the living embodiment of a fifteenth-century portrait….The only character who genuinely thrived was Friar Laurence; the part was expanded into a major role in the story and played with a quiet sincerity by Mervyn Johns.  Flora Robson, on the other hand, played down the vulgarity of the Nurse, so that she became a thoroughly respectable retainer in the Capulet’s service.  Laurence Harvey, an excellent actor in the right range of parts, never seemed to come to terms with Romeo; Castellani’s aim was to avoid all poetry of speech and persuade his actors to speak naturalistically–Shakespeare, in fact, was a liability which he, an Italian neo-realist, had to overcome…Amid this naturalism, and with a very muted Juliet, Laurence Harvey tried to put up a star performance, with the result that his miscasting became more evident.  Only the voice of Sir John Gielgud, speaking the Prologue, gave Shakespeare full utterance in the romantic style.” – Roger Manvell

The final word is left to Paul A. Jorgenson taken from his essay ‘Castellani’s Romeo and Juliet–Intention and Response’.  “For almost three hours, one had come to accept as normal a quietly passionate ancient world in which every physical shape, texture, and colour was incredibly beautiful; in which all the faces were worthy of long and anxious scrutiny; in which there were few words, but these the quintessence of Shakespeare’s poetry; and in which two young people, who seemed to belong more to the story than to the stage or screen, fled through brief sequences of Shakespeare’s play.  So immersed in Castellani’s wonderfully hybrid world, one carries out into the heedless street throngs some of the proselytizing fervor that the Italian himself had brought to the venture.  Critics who carried no absorbing emotion, none of the intended pity, from the experience are surely fit for treasons, stratagems, and spoils.”