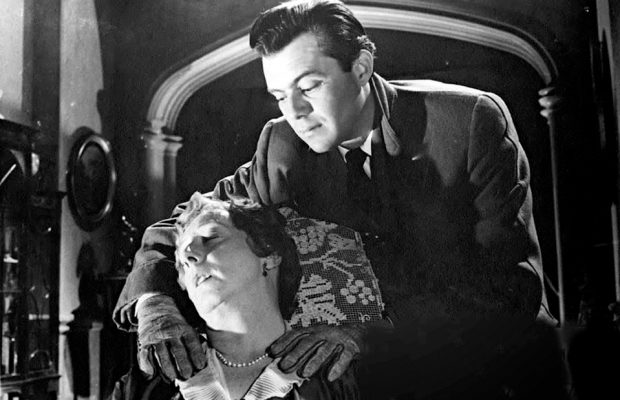 Toronto Film Society presented Cast a Dark Shadow (1957) on Sunday, February 5, 1989 in a double bill with The Man I Married as part of the Season 41 Sunday Afternoon Film Buffs Series “B”, Programme 5.

Young, designing and destructive male appears on the scene, takes up with rich and pitifully deluded older woman, then decides to get rid of her.  Thus the plot, with variations, of such important Hollywood films as Night Must Fall, None But the Lonely Heart, Sudden Fear, Witness for the Prosecution.  What these American films have further in common is that three of them are based on British novels or plays.

Cast a Dark Shadow is a very British film, both in the ensemble nature of its acting and in the elegance and style of the murderer himself–this, as the New York Times reviewer noted, was the “fine art of murder” as only the British could do it.  And the epitome of that elegance and style, at the centre of the murderous scheme, is Dirk Bogarde, ably supported by one who in some of her pictures could more than match his villainy, Margaret Lockwood.

By the late 1950s, Bogarde had reached the first plateau of his long and distinguished career.  In the 1960s he would play for the most part tortured but sympathetic roles, from the homosexual lawyer of Victim, the divided military officer of King and Country, and the lover-victims of Darling and Accident, to the apotheosis of such roles as Aschenbach in Visconti’s Dead in Venice.  But in the 1950s he was largely to be seen in tortured criminal roles, of varying degrees of ingratiating sinuosity, viewed mostly without sympathy.  He made his first mark as the juvenile delinquent who shoots an unarmed policeman in The Blue Lamp, a role he deepened in meaning but not in substance for Losey’s The Sleeping Tiger; and clearly with Losey he found his special elective affinity, making with him, later, some of his most important films.  Cast a Dark Shadow belongs very much to the spirit of these films, as well as to her performance as Debedat in The Doctor’s Dilemma (1959), the consumptive artist who believes that society owes him much more than he owes it, or as the vicious Claggart-naval officer, with characteristic homosexual overtones, of Damn the Defiant (1963).  In 1957, Bogarde was on the edge of these two phases of his career, and “Teddie Bare,” the name suggesting the pampered infantilism which so keynotes these early roles, is also a character grasped from inside, even though, as the New York Times complained, his motives for murder are not entirely clear. 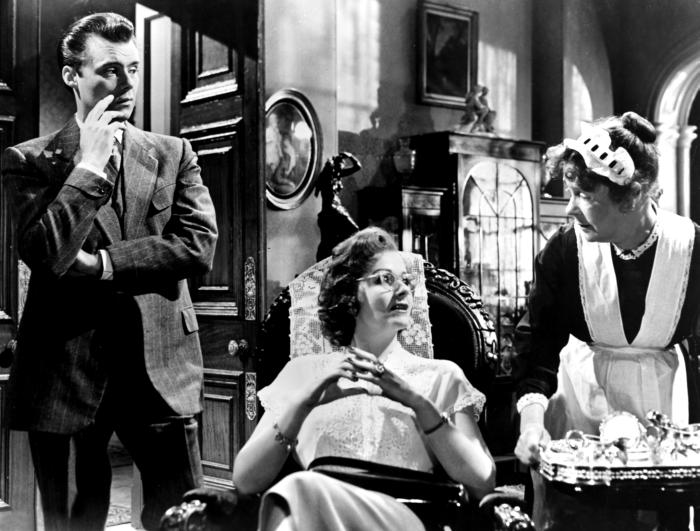 When Teddie takes a second wife (having murdered his first, Mona Washbourne, who suffers a like fate in the remake of Night Must Fall, in 1963), he meets his match, in margaret Lockwood, a, even the, major British actress of the 1940s, now reaching the end of her film career.  She had played from the beginning (Lorna Doone, 1935) enterprising, irrepressible heroines, and later in such films as The Lady Vanishes and its unHitchcockian clone Night Train to Munich.  But she became especially popular for the very wicked ladies she played in The Man in Grey and–The Wicked Lady.  She shares Cast a Dark Shadow with Bogarde.

Rounding out the acting ensemble are Kay Walsh, a veteran of David Lean’s films in particular (and his erstwhile wife); the murder victim–Nancy–in his Oliver Twist, she is here the suspicious sister of the murdered wife; Kathleen Harrison is once again the housekeeper she so often played (again a Dickensian, she was Mrs. Sowerbery in Twist, and Scrooge’s housekeeper in 1951); and Robert Flemyng, as always the soul of British discretion, is a carefully attentive lawyer.  It is this array of talent that carried this stylish thriller as far as i goes, for the director, Lewis Gilbert, is a filmmaker who made a number of estimable pictures, but who lacks a discernible style.  He made several more or less unexportably patriotic films (Reach for the Sky, Carve Her name with Pride), and only one masterpiece, Alfie, which may, however, owe its status as such more to Michael Caine and the permissive spirit of the 60s.  His auteur’s hand is difficult to detect here.

But in the matter of villainy, Cast a Dark Shadow gives us almost two for the price of one; a brassy young woman with a lot of villainy in her cinematic past, and the most brooding, dark-eyed villain of the British cinema.