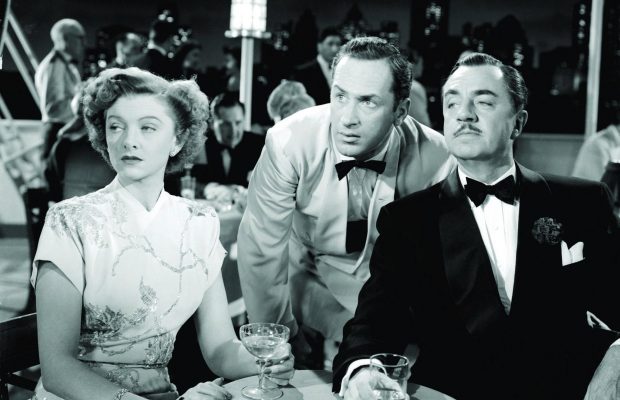 Toronto Film Society presented Song of the Thin Man (1947) on Monday, August 8, 2016 in a double bill with Sherlock Holmes in New York as part of the Season 69 Summer Series, Programme 4.

This is the sixth and last of the Thin Man series starring William Powell and Myrna Loy.  Since first working together in Manhattan Melodrama in 1934 with the first Thin Man film following immediately afterwards, they appeared together in fourteen films in thirteen years, with this being their second last.

Writer Lawrence J. Quirk didn’t have much enthusiasm for this last Thin Man pairing.  Even with a talented cast of actors that included eleven year old Dean Stockwell in his tenth film appearance as their son; Keenan Wynn, whose acting style didn’t seem to mesh with Powell and Loy’s; Jayne Meadows, the older sister of Audrey, Jackie Gleason’s onscreen wife, Alice; Ralph Morgan, also an older brother to the better known Frank of Wizard of Oz fame; and Gloria Grahame as the sultry chanteuse, he as well as Loy felt the film didn’t work.

Interestingly, Leon Ames plays the character Mitchell Talbin while in the previous Thin Man film, The Thin Man Goes Home made in 1944, he played husband Edgar Draque with Helen Vinson playing his wife Helena.  Originally Ames was to reprise this role but when Vinson became unavailable, it led to the unusual occurrence of him being cast in a totally different role.

Dean Stockwell played in a number of well-known films such as Gentleman’s Agreement with Gregory Peck in 1947, The Boy with the Green Hair with Pat O’Brien in 1948, The Secret Garden with Margaret O’Brien in 1949, Stars in My Crown with Joel McCrea and Kim with Errol Flynn both in 1950.  He was one of the few child actors to successfully continue in his chosen career as an adult.

Great cinematic pairings make for magical film experiences; couples like Fred and Ginger, Spencer Tracy and Katharine Hepburn, and Bogey and Bacall all possessed a hallmark chemistry that ignited the screen.  Joining this esteemed company is the most prolific “dream-team”: William Powell and Myrna Loy.  Appearing in fourteen films together, they were best known as Nick and Nora Charles, the wise-cracking husband and wife detective team of the Thin Man series.  Beginning with The Thin Man in 1934, they would make six films in the series all told, finishing with Song of the Thin Man in 1947.

Loy, who began her career playing a variety of mysterious Asian exotic characters, hit her career stride as the no-nonsense, witty Nora—a perfect foil for Powell’s suave, cocktail-swilling Nick.  Off screen, the couple’s relationship was purely platonic, each holding the other in the highest regard; Loy once declared, “I never enjoyed my work more than when I worked with William Powell.  He was a brilliant actor, a delightful companion, a great friend and above all, a true gentleman.”  As Nora, Loy was dubbed “The Perfect Wife,” a label she admittedly struggled with.  As she explained, “It was a role no one could live up to, really.  No telling where my career would have gone if they hadn’t hung that title on me.  Labels limit you, because they limit your possibilities.  But that’s how they think in Hollywood.”  Still, Loy managed to make the best of her screen opportunities: her starring role in The Best Years of Our Lives (1946) cemented her popularity and she enjoyed a career spanning over fifty years.  In 1991, she was awarded with an honorary Oscar for career achievement.  It was pointless to try to stop the Nora juggernaut anyway: ‘Men-Must-Marry-Myrna’ clubs popped up all over America, professing their devotion to the character, and her profile was the most requested by women to their plastic surgeons during the 1930’s.  In 1936, she was voted ‘Queen of the Movies’ by twenty million fans; her king, however, was Clark Gable.

The sixth instalment of the Thin Man franchise has Nick and Nora trying to solve the murder of a bandleader on a gambling ship.  Director Edward Buzzell took the reins of the production, having cut his teeth on a couple of Marx Brothers films, At the Circus (1939) and Go West (1940).  Consummate character actor Keenan Wynn was cast as a hipster musician. The son of Broadway and radio star Ed, the younger Wynn was content to play second fiddle in films (though in Song of the Thin Man he plays clarinet): “My billing has always been: ‘and’ or ‘with’ or ‘including.’  That’s all right.  Let the stars take the blame.”  An eleven-year-old Dean Stockwell appears as Nick Junior; one of the few actors to successfully negotiate a transition from child to adult actor, Stockwell found later success in David Lynch’s Blue Velvet (1986) and Jonathan Demme’s Married to the Mob (1988).  Gloria Grahame, arguably the greatest example of the on-screen femme fatale, was cast as a sultry nightclub singer—being tone-deaf, however, she was ultimately dubbed over.  The visual, however, was striking: her gold-lame outfit was stunningly sleek, but almost pushed to the limit. Ralph Morgan, brother of Frank Morgan (of Wizard of Oz fame) and Jayne Meadows, later to be Mrs. Steve Allen, also appeared in supporting roles.

Despite the large amount of talent in the film, the material was stretched thin after five movies.  In her autobiography “Myrna Loy: Being and Becoming,” co-written by James Kotsilibas-Davis, she decreed, “Song of the Thin Man was a lacklustre finish to a great series.  I hated it.  The characters had lost their sparkle for Bill and me, and the people who knew what it was all about were no longer involved.  Woody Van Dyke was dead.  Dashiell Hammett and Hunt Stromberg had gone elsewhere.  The Hacketts were writing other things.  Surprisingly, though, it was pretty well received, particularly in England, where, according to the Hollywood Reporter, ‘Most of the cricks gave a cordial welcome to old-timers Bill Powell and Myrna Loy.…’ I know that only because Bill sent me the article with ‘old-timers’ circled in pencil and this note scrawled on top of the page: ‘Dear old girl!  I know you wouldn’t want to miss this!  Love, Willy (old boy).’”

In her personal life, Loy defied “The Perfect Wife” label with four marriages and four divorces.  On the screen, though, she nailed it.  Director Alan Pakula perhaps best explains her ageless mystique.  “In the Powell-Loy pictures, the relationship between those two was as deep and as alive and as true as in any complicated story about a marriage I think you can have.  And she was a working, collaborative wife.  To young guys today, that’s the fantasy American woman.  They want to marry bright women with minds of their own, careers of their own, wit, sexuality.  Women who are a match.  Myrna always had that.  At the same time, you always felt she really cared about her man in some very simple way.”