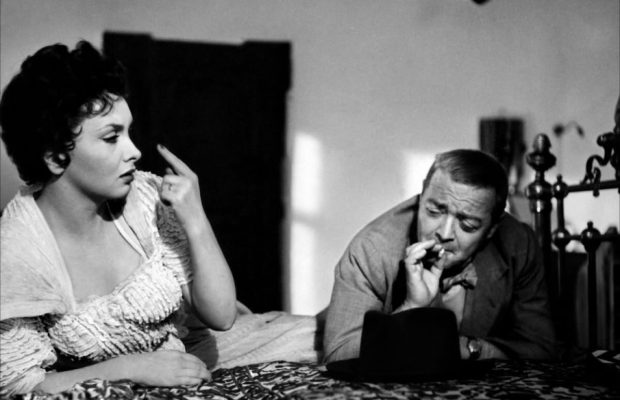 I was reading the biography “bogart” by A.M. Sperber and Eric Lax who offered some insights into the writing of tonight’s film.

When one of the censors in the Breen Office read the proposed script for Beat the Devil, he or she wrote, “Everyone in the story, with one exception, is a completely amoral person, to whom the question of right or wrong would never occur.”  And this was the very idea that had attracted John Huston and Humphrey Bogart to wanting to make this film.

There were many issues that made this a difficult film to begin production on.  There were three companies in three different countries involved with the picture—Santana in America, Romulus in Britain and Roberto Haggiag in Italy—which tripled the normal problems with regard to finances, regulations and work permits.  Before Huston would put his final touch on the script, the original script written by the author had already been rewritten by Anthony Veiller who was a writer on The Ex-Mrs. Bradford screened here two weeks ago and Peter Viertel who was an uncredited writer on The African Queen.  At this juncture, the Breen Office informed American production company Santana that the script was unacceptable under the provisions of the Production Code.  This almost ended the project.  Huston was ready to drop the picture but Bogart persuaded him to continue.  It was Jennifer Jones’ husband, David Selznick who came up with the writer who saved the film, the young novelist Truman Capote who was still in Italy and had polished up the script of Jennifer’s latest film, Indiscretion of an American Wife.

Bogart was happy with Capote.  He proclaimed Truman wrote like fury and had the damnedest and most upside down slant on humour he’d ever heard.  So Capote, with Huston as his goad and editor, produced the dialogue at most a day before it was to be shot and sometimes wrote on the set as the actors contributed their thoughts.  In the evenings, he sat with Huston and went through his pages for the day.  Since Bogart was used to learning his lines the morning of the shooting, the absence of finished scenes until the last moment wasn’t a problem.

Already ill when this film was made, Bogart made seven more before dying in his sleep just a month after his 57th birthday in January of 1957 from his battle with throat cancer.

Directed by John Huston in 1953 and based on a novel by the same name by Claud Cockburn using the pseudonym James Helvick. The screenplay was written by Huston and Truman Capote. It stars Humphrey Bogart, Gina Lollobrigida and Jennifer Jones. The supporting cast includes Peter Lorre, Robert Morley and Charles Gray. The plot concerns a group of characters all out to secure the rights to a uranium mine in Kenya.

Truman Capote said that he and Huston wrote the film as a parody and spoof of films-noir like The Maltese Falcon. Huston and Truman Capote wrote the screenplay on a daily basis supplying scripts as the film was being shot. This did not make many of the actors happy. In order to have the script catch up to the filming, Huston told the cast that he didn’t want them to see pages of the script until they were needed on set. He also put the crew through elaborate shot set ups to allow Capote time to finish pages of needed script. Huston was known to have a dark, somewhat cruel sense of humour so it should not have come as a surprise to his good friend Bogart that he chose to work this way.

It was filmed in the coastal town of Ravello, Italy near Naples. Cast and crew had said there was a party atmosphere during the filming. There were nightly parties that included high stakes poker games and arm wrestling competitions. Other Hollywood types heard of the fun and Orson Welles and Ingrid Bergman were among those who arrived to join the fun. It was also an accident prone production. Bogart lost his bridge in a car accident and he had to have a replacement flown in from his dentist in California. Truman Capote was hospitalized with impacted wisdom teeth and John Huston fell off a 40-foot cliff while out walking one evening. He was unhurt.

The film bombed at the box office but has since achieved cult status. Bogart is said to have hated the film because he lost money on it and had said that anyone who said that they liked it was a phony. John Huston always liked the film and had expressed regret that his friend Bogie didn’t live to see the film achieve masterpiece status. Even if it was “cult” masterpiece status.