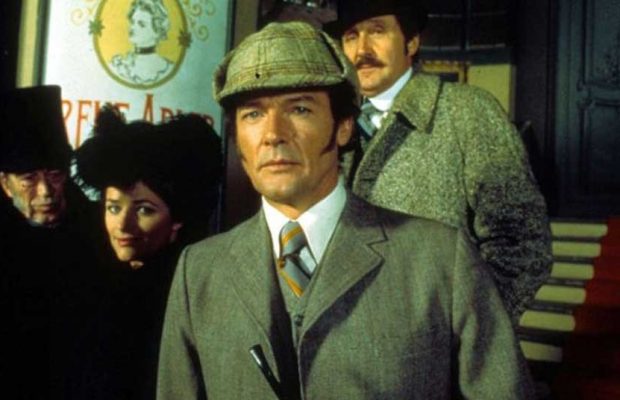 Toronto Film Society presented Sherlock Holmes in New York (1976) on Monday, August 8, 2016 in a double bill with Song of the Thin Man as part of the Season 69 Summer Series, Programme 4.

At John Huston’s memorial, Jack Haley Jr., who was the executive in charge of production of tonight’s film, reminisced, “Roger Moore was Sherlock Holmes and he screamed at me that John Huston was stealing every scene.  …I once asked John why he agreed to do this show and he said, ‘Well, Jack, I have the time, I can use the money…and Moriarty is a part I was born to play.’”

In this made-for-TV movie, Charlotte Rampling plays Holmes’ long-time lover Irene Adler, and is the weak link that places Holmes at risk of being eliminated as a viable antagonist for evildoers.  She is his reason for wanting to linger this far away from his London home even when the crime has been solved.

In his book The Immortals: An Unauthorized Guide to Sherlock and Elementary, Matthew J. Elliott wrote that pastiche writers and filmmakers had frequently reunited the characters of Holmes and Irene, usually suggesting a romantic relationship between the two.  In his famous biography, W.S. Baring Gould suggested that Holmes and Irene were involved sexually and that the child resulting from that union grew up to be Rex Stout’s famously rotund detective Nero Wolfe.  In tonight’s film, screenwriter Alvin Sapinsley also supposed that Holmes and Irene had a torrid affair, a fact exploited by Professor Moriarty who kidnaps their son in order to dissuade Holmes from interfering in this week’s crime of the century.  And, for those of us not aware, author Carole Nelson Douglas had written an entire series of Irene Adler novels.

For television, and for theatrical release in Europe, the same studio which had unleashed Basil Rathbone upon the Sherlockian world, Twentieth Century-Fox, cast an actor well known as two great mystery figures—James Bond and the Saint—as Holmes in 1976.  The suave, handsome Roger Moore (then 48) was certainly the prettiest actor to portray Sherlock: his unsettling good looks made it difficult to fully accept a talented actor bringing his best to a difficult role.  Actually, it first took a good deal of persuasion on producer Jack Haley, Jr.’s part to convince Moore to take up the deerstalker, but he was won over by the charms of the script.  “Holmes comes to life in this story.  I wear a number of different disguises and this appeals to me.  I have a love affair with a beautiful actress who has a nine-year-old son named Scott and we learn that Holmes’s middle name is Scott.  And, of course, there is Moriarty threatening to steal all the gold in the world.  But what I liked most about playing Holmes is that there is more dialogue in this script than I ever had in 120 ‘Saint’ episodes and two ‘Bond’ films.”  He plays the role absolutely straight.  “And, most important, I do my own interpretation and don’t copy any previous actors who have done the role.”

Truthfully, the two-hour telefilm Sherlock Holmes in New York, had actually been conceived as one further utilization of the extensive “period New York” sets Twentieth Century-Fox had originally built on its backlot for Hello Dolly.  Screenplay writer Alvin Sapinsley, well grounded in the Canon, had devised an endearing device to bring Holmes to the greatest metropolis of the New World in 1901, larding the events with many Sherlockian references from other stories.

The production also features an interesting gallery of supporting players, helping to enrich the show’s glamour.  The alluring Charlotte Rampling plays the actress Irene Adler with whom Holmes shares his heart.  Patrick Macnee, the dapper male half of The Avengers team, patterned his Watson impersonation somewhat too closely to the unctuous Nigel Bruce model.  But as the program’s Moriarty, John Huston gives the most interesting feature performance: leering and full of juicy lines (“I am going to crush you in such a way that your humiliation and downfall will be witnessed by the entire world!”) spoken in an Irish brogue.  He is a worthy addition to the villain’s rank of players.

Judith Crist, reviewing the show for TV Guide (10/18/76), felt herself pleased.  “Moore and Patrick Macnee provide attractive variations on the familiar characters.  Moore’s Holmes, in fact, has a dash of the debonair and the worldly…that sits well on the great detective.  After Moriarty, in his rococo lair, threatens Holmes with a trap door, flying daggers and a crashing chandelier, the great detective calmly remarks, ‘A pity about the chandelier; it was the only item in the room that showed the merest modicum of style.’  And when Sherlock and the lady in distress have their moments, there’s an undertone of emotion new to Holmes sagas…. Under Boris Segal’s direction, this is first-class entertainment.”

The Films of Sherlock Holmes by Chris Steinbrunner and Norman Michaels, Secaucus, N.J., The Citadel Press, 1978