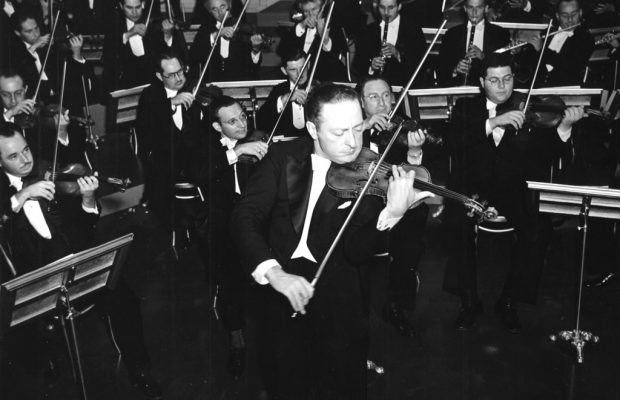 Toronto Film Society presented They Shall Have Music (1939) on Sunday, December 8, 2019 in a double bill with Metropolitan as part of the Season 72 Sunday Afternoon Film Buffs Series, Programme 3.

This Samuel Goldwyn production has been cleverly geared to strike a wide audience appeal, and has succeeded admirably.  First, there is Jascha Heifetz, the great violin virtuoso, who makes five appearances as he demonstrates in close-ups his marvelous technique in playing some of the most celebrated numbers in his repertoire.  This great treat to music lovers is something for every exhibitor to shout about, for it will bring to his theater people who have never been there before.  On the popular side, there is a grand down-to-earth story, cunningly loaded with the good old hoke, but done with class and dignity.  The cast is exceptionally fine throughout.  Andrea Leeds is the daughter of Walter Brennan, an old music master, who is devoting his life to helping underprivileged children on the East Side of New York to secure a musical education.  In an old house he has leased, he teaches the youngsters with the help of a few assistants, with his daughter as business manager.  Joel McCrea comes along to help Andrea when financial difficulties arise, and the proprietor of the music store who has rented the musical instruments is demanding pay or he will take them back.  And this on the eve of a concert of the professor’s symphony orchestra is giving.  Gene Reynolds, who has been seen in a couple of modest pictures, does a grand role as the youngster from a poor East side family who is turned from being a hoodlum by his inherent love of music.  The  old music master gives him a new outlook on life, and he is instrumental in bringing Jascha Heifetz into the life of the little community group of musicians through an interesting and entertaining series of events that culminates in the great musician playing at the children’s concert, saving the music school from going on the rocks, and giving the production a bang-up heart-warming climax that will have your audiences laughing and crying by turns.  Brennan is superb as the old music master.  This Reynolds boy looms as one of the real comers among the youngsters, for he shows genuine feeling in his actions, voice and expressions.  Director Archie Mayo has done splendidly in combining the artistry of Heifetz and the human interest appeal of the youngsters’ musical efforts into a moving drama that is simple but highly dramatic in the emotional qualities it evokes.  Selling angles:  Heifetz to the musical groups; the human interest story to the regular trade; and the amazing work of the Junior Symphony Orchestra. 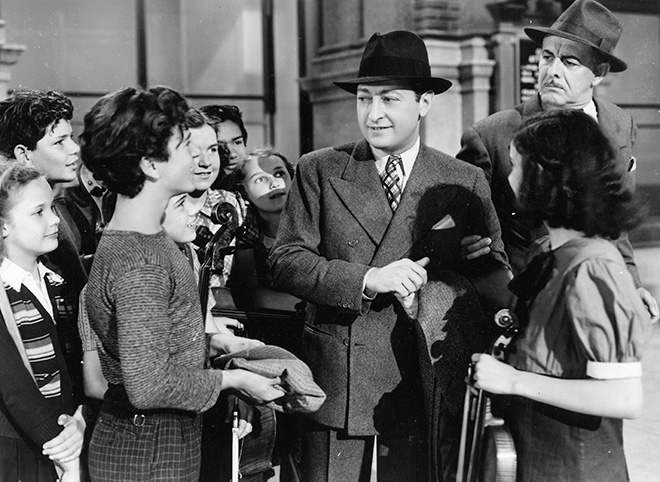 HOLLYWOOD, July 10.—Samuel Goldwyn, who never does anything by halves, has not only brought the great Jascha Heifetz and his music to the cinema’s millions, but has brought him to them as an actor portraying himself in a story about the great Jascha Heifetz and his music.  This neatest trick of the summer is what is correctly known, Ladies and Gentlemen of Showbusiness, as Production!  That half of the job would have satisfied most producers as a work well done, all things considered, but not Goldwyn.

Surrounding Heifetz in They Shall Have Music, but never over-shadowing him, are such marquee personalities of strictly film stripe as Joel McCrea, Andrea Leeds, Walter Brennan, Terry Killburn, Porter Hall and Marjorie Main, to name but a few.  These players of highly marketable distinction perform acting chores of minor intrinsic importance, some of them scarcely more than bits, but there are their names, on a platter, for the use of showmen who doubt that the name of Heifetz along is likely to stampede the population to the ticket wicket.  That, Ladies and Gentlemen, is Showmanship.

To these players, for subordinating their personal interests to that of the picture, to associate producer Robert Riskin for managing to fabricate a coherent production without sacrificing the music which inspired it, to screen playwrights Irmgard Von Cube and John Howard Lawson for concocting a series of independently arresting incidents which seem to equal a story, and to director Archie Mayo for keeping the whole synthesized project on the track, the music conscious peoples of the globe owe a substantial debt.  And to Goldwyn, who got all these people to do all these things necessary to bring Heifetz within reach of the general public, all honor.

Naturally, the Heifetz music is the piece de resistance of the picture.  Properly, there is much of it, superbly recorded, and much superb photography showing Heifetz playing it with a symphony orchestra, with a children’s symphony, and alone.  Eleven musical numbers are programed.  But Heifetz does not monopolize musical attention.  The Peter Meremblum California Junior Symphony Orchestra, a little girl named Jaqueline Nash who sings with it and a child pianist named Mary Ruth have important sequences all their own.

The story is about a music school for poor children, financial troubles which threaten its future and the ways and means by which Heifetz, as himself, is moved to personally sponsor the project.  The telling is in the main humorous.

BEN WASHER was at Sing Sing the other day.  He says he enjoyed being there very much.  One thing he learned was that even when invited to State’s Prison, it is as difficult to get in as it is to get out.

Having once entered the prison yard, his car was carefully examined and checked before passing through the double electric locks.  Thanks to Warden Lewis Lawes, Washer held a special screening in the prison chapel for more than 1,500 inmates, of Archie Mayo’s masterpiece, made for Samuel Goldwyn (United Artists), They Shall Have Music.  Just as you guessed, we went along for the ride and soon found ourselves participating in an unusually interesting experiment.

In this picture, which is built around the celebrated Jascha Heifetz, highbrow stuff and therefore limited in its box-office appeal, or is it made of the stuff that makes for universal entertainment?  It was thrilling to see the effect of the picture and the music on the prison inmates.  It was not a compulsory screening.  Nevertheless, the chapel was filled, although the showing was held during the recreation hours.  Many remained standing through the performances.  Only two left before the show ended.

The boys laughed and applauded, and Heifetz probably had never been received more enthusiastically by a Carnegie Hall audience.

It is unusual to present such pictures at a prison.  The prisoners have a strong preference for straightaway action films and modern musicals.  The prison officials claim that the inmate audiences are as normal as audiences elsewhere.  Maybe they’re right. 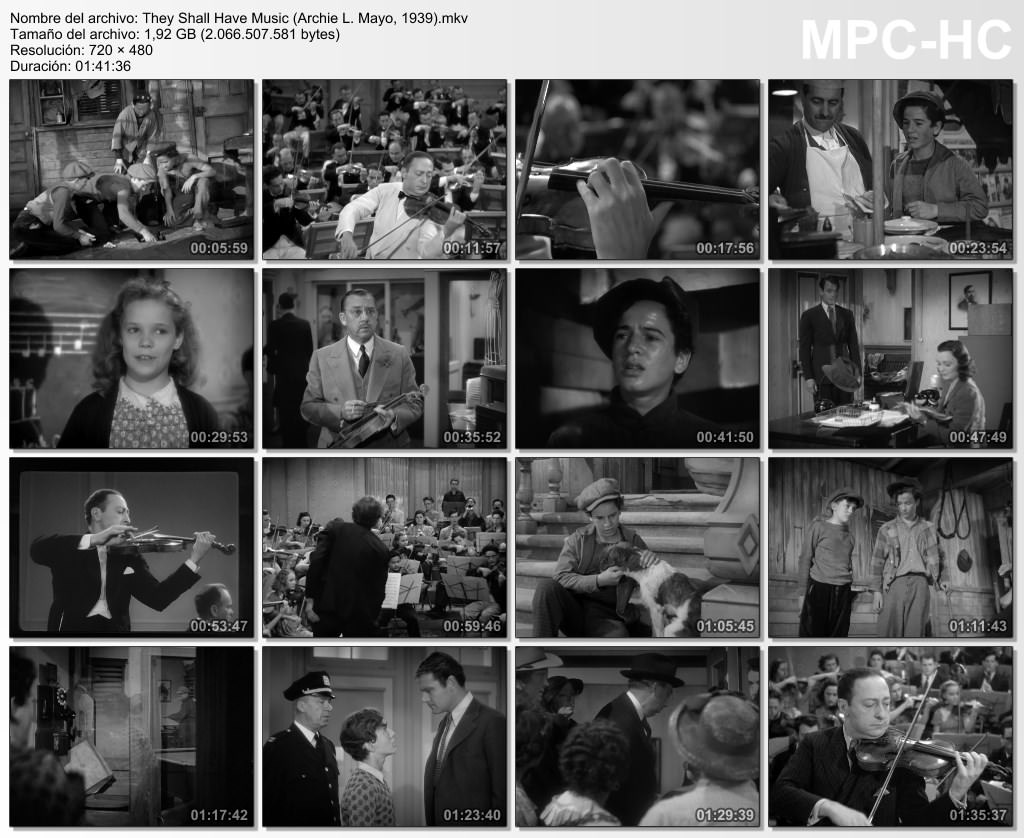 They Shall Have Music might as well have been entitled They Shall Have Canadians. The child actress/singer who plays “Betty” is Jacqueline Nutt (billed as “Jacqueline Nash”), born March 4, 1929 in Hamilton, Ontario. She began her show biz career at the age of five, singing on Canadian radio. Her precocious talent likely led her family to later relocate to Hollywood, where the child was enrolled in the Mar-Ken School for professional artists. They Shall Have Music was Jacqueline’s first film. After graduating high school in 1945, she changed her name to Gale Sherwood and worked on a few more pictures—a Poverty Row jungle-girl epic, Blonde Savage (1947); a boy-and-his-dog feature, Rocky (1948); and a let’s-not-mention-that-he-was-gay biopic of Tchaikovsky, Song of My Heart (1948). Her real career, however, was appearing for years as part of a double act with movie star/tenor Nelson Eddy. They performed together right up to his death in 1967, after which Sherwood retired to Florida.

Kaye Connor, born December 20, 1925 in Vancouver, BC, plays the uncredited role of “Girl in Orchestra”. Her early musical talent for singing and violin-playing may too have provided the impetus for her family’s move to LA in 1938. Almost immediately, Kaye got work as a stand-in for child-actress Jane Withers, a job which lasted throughout her high school years. At the same time, she studied violin under impresario Peter Meremblum, leading to her appearance as a member of the Meremblum Junior Symphony in They Shall Have Music, but more attention was paid to a then-13-year-old pianist named Dolly Loehr, who went on to star in ingénue roles under the name Diana Lynn. Connor, meanwhile, moved to New York in 1946, married baritone George Britton a year later (they went on to have three children), and spent the rest of her performing career appearing on stage and in musicals as a coloratura soprano on Broadway and tours across the States, Canada, and Great Britain. After retiring from performing in the early-1960s, Connor opened a successful travel agency business.

Assistant director Jack Reynolds, born June 2, 1909 in Claresholm, Alberta, had a less-than-storied Hollywood career as an AD, journeyman actor, and assistant casting director for Samuel Goldwyn. His credits include French Leave (1948), The Basketball Fix (1951), and the 1950s TV show The Cisco Kid. Perhaps more important, he gave his last name to his wife, actress Marjorie Reynolds, to whom he was married for 16 years. Her career loomed larger, with credits including starring roles in Holiday Inn (1942) and Fritz Lang’s Ministry of Fear (1944), along with many lesser-known B-films. Marjorie Reynolds achieved TV fame in the 1950s as William Bendix’s wife on the comedy series The Life of Riley.