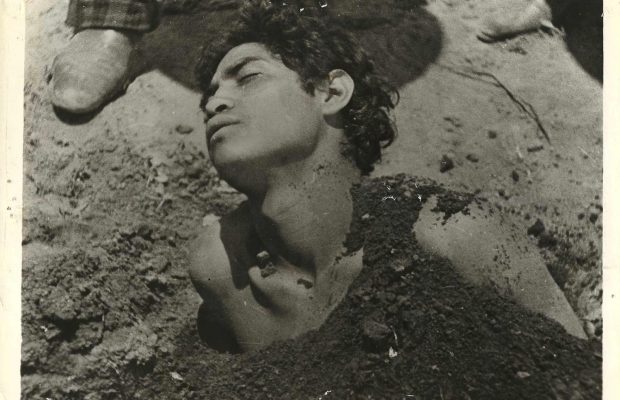 The only Soviet film-maker ever to be brought to Hollywood, Eisenstein arrived in 1930; but though he completed scripts for An American Tragedy and Sutter’s Gold, he was released from his contract and these subjects were re-written and directed by others.  Later he was independently financed by Upton Sinclair (author of The Jungle and many other novels) to make a picture in Mexico.  Que Viva Mexico! was planned as “an immense fresco of Mexican life, touching upon all periods from the Aztecs till today”, to consist of four dramatic episodes framed by a prologue and epilogue.  After two years and the shooting of hundreds of thousands of feet of film, Sinclair announced that his financial resources were exhausted, withdrew his support, and claimed the negative as his own–announcing that he would arrange with a commercial Hollywood producer, Sol Lesser, to edit the footage shot to date and release it.  The resulting controversy was tumultuous.  Protests were launched by film journals, students, critics, and intellectuals in America and Europe.  Pressure groups raised money and threatened to seek legal means to take the footage from the backers and send it to Eisenstein, already returned to Russia.  It is said that at one point Sinclair asked for a payment from the Soviet Government for the footage but was refused.  In any event the material was edited, apparently under the supervision of Sinclair and Lesser, and released as Thunder Over Mexico–the subject-matter of which was to have been only one of Eisenstein’s projected four episodes, and originally intended to run but 20 minutes.  Since this director’s complex editing technique was the meat and marrow of his style, one can well imagine that the way others assembled his footage was far from his own conception.

Critical reation to Thunder Over Mexico was, to say the least, mixed.  Perhaps few were as harsh as John Grierson who said: “The clouds and the cactus will pass for great photography among the hicks but they are, of course, easy meat for anyone with a decent set of filters.  The significance Eisenstein might have added to the tale is not there; types, acting and glycerined clouds cannot turn a simple tale of village rape into the passion of a people.  There were other things up Eisenstein’s sleeve, or he is not the dialectician I have always taken him for.”

Equally, few could have been as happy as our old friends Bardeche and Brasillach, who enthused: “No question about it, here was a masterpiece.  The director of Potemkin had displayed no less talent in a capitalist country than in the USSR.  It is evident this film is stamped with the Bolshevik genius for propaganda–gentle, virtuous Indians are oppressed by pitiless white men.  Except during the last minutes, when a proletarian revolution breaks out, the absurd theme does not really bother one.  The adventures of Sebastian, the charming Indian, victim of greedy Spaniards, might have taken place anywhere.  Every colonization has similar crimes on its conscience, and what happens to Sebastian is sufficiently individualized to seem convincing.  That, however, is not the essential thing.  What is important is the plastic perfection of the photography of these temples, these stones which co not seem to be inanimate, these fleshy plants which lend the Mexican scene so funereal an aspect, in which many and nature are perfectly in accord.  How theatrical, how melodramatic, Lawrence’s Plumed Serpent seems beside this gifted Russian’s work!  Beyond all else, how far such a film, overburdened as it is with beauty, carries us from filmed dramas.  We are aware that this a wordless film with musical accompaniment, which carries us back to the silent technique…but it also carries us back to the autonomous reality of cinematography.  Tormented by the thought of what has been cut out of this picture, everyone has regarded Thunder Over Mexico as not truly a film but a collection of stills.  This is a profound injustice.  The ideal thing would be to own this film, as one owns a book, so that its construction and its rhythm could be examined in detail.  Each one of the images is of a prodigious and sensual sharpness, boldness an color.  Looking at the texture of the materials, one has the impression of having touched them, as in a painting of Manet’s, or in Pabst’s Don Quixote.  All those images, each so beautiful in itself, vanish and reappear, in the mounting crescendo of a composition like music which is one of the purest things we have ever seen in the cinema.  After Thunder Over Mexico it is not necessary to repeat that film stands at the crossroads between music and painting; it is obvious.  Eisenstein’s plastic qualities are not isolated as Pabst’s often are; they are combined in conformity to the rhythm.”  (Here Iris Barry, editor of B. & B.’s book, adds a footnote: “Curious praise for a film which Eisenstein regards as a travesty of his intentions”.)

Richard Griffith in The Film Since Then says: “The absurdity of calling Eisenstein’s a film he did not edit is now obvious, and was only confirmed by the subsequent release of Death Day, edited from the original material by Sinclair, and of Time in the Sun, edited by Eisenstein’s disciple Marie Seton from instructions and scenario notes which were, one gathers, more or less posthumous to the project.  Apparently there was at no time a complete original script; it is useless even to speculate what the film would have been like if completed by Eisenstein.  Perhaps another Birth of a Nation or Intolerance, which were filmed out of Griffith’s head?  Or Que Viva Mexico! might have joined the original versions of Stroheim’s Greed and Gance’s Napoleon as projects inherently impossible of fulfilment.  Eisenstein, in the fragments we saw of the Mexican footage, came closer to the life of the common people than in any of his masterpieces.  But whether that life could have been shaped into film form will forever remain an unanswered question.”

In London, the National Film Theatre’s notes called Thunder Over Mexico and Time in the Sun “the most fascinating and tragic fragments in the history of the cinema.  For Eisenstein’s responses to Mexico, stimulated not only by the country itself but by his profound knowledge of Mexican art, was a deeply imaginative one; and the film, incomplete as it is, speaks eloquently for itself, making it clear that the impact of Mexican culture upon one of the world’s great directors was a dynamic one, and likely to have inspired his masterpiece.”

Footage:  Miss Seton’s version of the Mexican footage, Time in the Sun, has been shown by several Toronto film groups; Thunder Over Mexico has not, to our knowledge, so it was selected for this Series.  The print we will show has, we understand, a sound track with music and commentary, for whose quality we cannot vouch!