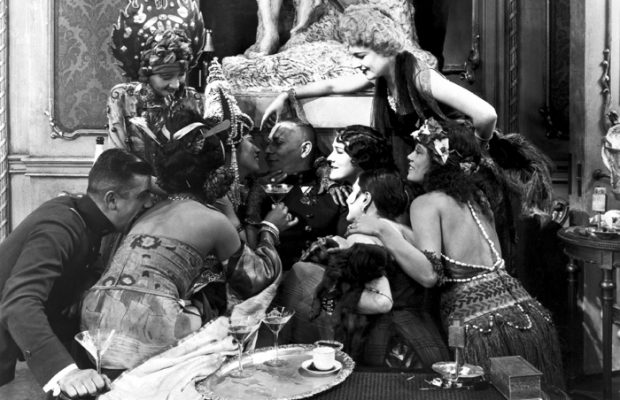 Most of the films of Erich von Stroheim were never shown in the form he intended.  Queen Kelly was no exception.  Commissioned by its star, Gloria Swanson, its production was halted by her in 1929–partly because she feared that the subject-matter of the still unshot sequences would never pass the censors.  The film was shelved, at a reputed loss to Miss Swanson of $800,000.  Later she herself directed a final scene that brought the story to an abrupt conclusion with the heroine’s death.  (Stroheim, it seems, had her survive and go on to further adventures in a German East African brothel!)  Gloria then released the film in South America in the hope of recouping some of its cost.  Von Stroheim’s contract prevented its distribution in the U.S. without his permission; it has never been shown commercially there.  This version, presented to the MMA Film Library, was edited by Miss Swanson, not von Stroheim.

Britain’s National Film Theatre showed Queen Kelly several years ago; I do  not know if their version was identical with MMA’s.  Their programme note says, in part: “It explores the quintessential Stroheim theme–the love of a decadent aristrocratic rake for a simple young girl…the film contains some marvellous passages of Stroheim, notably in the scenes dissecting the decadence of the palace entourage.  The unforgettable Queen Regina (Seena Owen) wanders through her palace naked with a cat on her shoulder, reclining in one scene in an empty marble bath for a pedicure, cat still on shoulder, a box of veronal and a sumptuous edition of The Decameron nearby.  Queen Kelly reveals, in the midst of the usual Stroheim atmosphere, a side of the director’s talent not apparent in his earlier films–a tenderness and understanding in the characterization of the young girl, whom Gloria Swanson plays with a subtlety and softness surprising from the brash heroine of Male and Female.”

Footnote:  In the sequence in Sunsent Boulevard where Gloria Swanson, as an ageing movie queen, raptly watches a scene from one of her old films, the ‘movie-within-a-movie’ footage is from Queen Kelly.  A further ironic touch had von Stroheim playing a sizable part int he same film as her ex-director and ex-husband, now a servant!