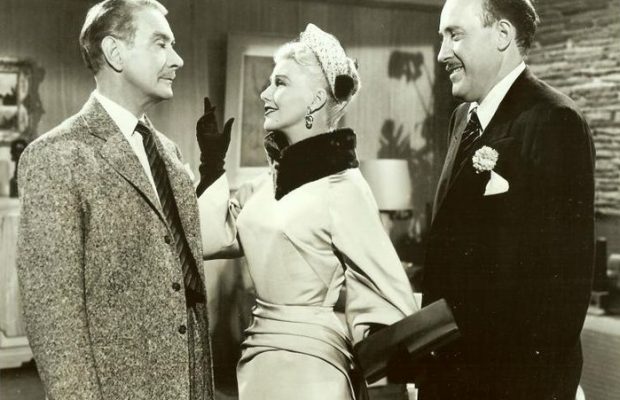 Toronto Film Society presented Dreamboat (1952) on Monday, December 12, 2016 in a double bill with It Started With Eve as part of the Season 69 Monday Evening Film Buff Series, Programme 4.

Clifton Webb wrote in his autobiography Sitting Pretty that he was “very grateful” when he was presented with a departure from the stereotypical Belvedere image frequently associated with him.  This role required him to be involved in several barroom brawls, wield a sword with the precision of an Errol Flynn, jockey a galloping horse through walls of fire, and leap through second-story windows—among other things.  He was also given the opportunity to dance briefly with Ginger Rogers.

In preparation for the role, Webb said it was deemed advisable for him to “undergo special athletic training.”  His preparation involved “doing roadwork, twirling Indian clubs, and getting battered by a medicine ball.”  Webb complained, “I never realized the human body was comprised of so many muscles, all sore.”  Fred Cavens, Hollywood’s fencing master, who taught such people as Fairbanks, Flynn, and Cornel Wilde, said, “Mr. Webb was a remarkable pupil.  He possesses great body coordination.”

Since he was supposed to have been a silent screen actor when those sequences were shot, there was no sound equipment used.  Director Claude Binyon even ordered mood music to be played while the actors went through their paces.  Although he made several silent films, Webb said, “I realize now what a cinch silent actors had.  Why, this is nothing compared to doing a sound picture.  There are no lines to learn, no scripts to study.  All you have to do is show up on the set every day.  It’s a dream!”

Since he was to dance briefly with Rogers, Webb decided to get himself in shape in that respect as well.  “I did a rather foolish thing when I put away my dancing shoes.  I never got them down again.  Oh, if I were at a party and had a few drinks and felt in the mood, I might get up and do a few steps of interpretive dancing…alone.  But the thought of pushing another person around a crowded dance floor appalled me.”

Ginger Rogers enjoyed playing opposite Webb.  She said, “Clifton was really funny in this film and played his stodgy professor role with his customary artistry.”

In view of the fact that Webb was forever complaining about being identified as Belvedere, it was strange that he allowed clips from Sitting Pretty to be shown in Dreamboat.

Not everyone liked the film.  Patrick McGilligan critiques in his 1975 book on Ginger Rogers that “Dreamboat is one of the more exasperating movies in the Rogers file, simply because its premise is promising while its execution is highly flawed although the silent-movie parodies, which occur too briefly, are very ingenious and funny.  The trouble, he claims, with this whimsy, which looks fine on paper, is that Claude Binyon directed his own script in a flat, unimaginative, stuffy style.  Webb is unusually crotchety and never fleshes out his role, while the marginal romantic adventures of his daughter amount to a tiresome sub-plot.  Rogers, second-billed now in her bejeweled “star” phase, is surely welcome in her abbreviated passes before the camera–she even has a night-club ditty, with tuxedo-clad chorus boys in the background, crooning “You’ll Never Know”–but the movie is an unfortunate object lesson in how to misapply talent.”

Regardless, TFS thinks it’s delightful and we hope you enjoy this 50s romp.

Webb, once a silent screen star but now a dignified professor, is horrified when his old movies pop up on television, thanks to ex-co-star Ginger. The satirizing of silent movies and television add lots of laughs to this very entertaining picture. – Barry Chapman

Clever romp: silent-star Rogers cashes in on TV showings of her old movies, to chagrin of costar Webb, now a distinguished professor. Scenes showing their old silent films are most enjoyable. – Leonard Maltin

Hollywood’s low opinion of TV is once more revealed with blithely superior derision and a lordly splurge of burlesque in Twentieth Century-Fox’ “Dreamboat,” which came to the Roxy yesterday. And as an able exponent of loftiness and disdain, it has arrayed that master of withering sarcasm, the serene and eloquent Clifton Webb.

As a polished professor of English in a Midwest college who is disclosed as an ex-movie idol in silent pictures now highly popular on TV, Mr. Webb has the job of expressing contempt for such robbing of graves and for the greedy and shameless individuals who dish up TV trivia for the mob. And, being an expert at delivery of the barbed phrase and frozen stare, Mr. Webb carries out his assignment with amusing and telling effect.

On a trip to New York to get an injunction against the further showing of his old films—to resist what he solemnly considers an invasion of his privacy—the character played by the actor runs afoul of a huckster (in spades!) and the remarkably preserved leading lady of his ancient swash-buckling films. And in his relations with these two phonies, whom Fred Clark and Ginger Rogers play, is brought out a slappy burlesque of the mechanics and material of TV shows.

But it must be said that the fastest and most hilarious sport in the film is that generated in the travesties of old silent movies that are shown. It is the scenes of Mr. Webb and Miss Rogers as the heroic and gesticulating stars of an ancient World War I drama, a romance on the order of The Sheik, a Foreign Legion adventure and a Scaramouche-sort of costume thing that achieve the highest ratings on the laugh-machine. These are the most inventive and satiric bits in the film.

As a matter of fact, one might question whether Claude Binyon, who wrote and directed it from a story by John D. Weaver, doesn’t do quite as murderous a job on the standards of early movies as he does on early TV. And one might also question whether he does quite enough to display the superior qualities of humor of contemporary film comedy. For the fact is his sardonic story runs exceedingly thin and is allowed to end up in a gag-scene that looks like a desperation device.

Mr. Webb is deliciously consistent when dishing out cutting remarks or betraying the slightest traces of middle-aged vanity, but he falls in a heap of cheap nonsense when compelled to “go Hollywood.” They have to borrow a scene from “Sitting Pretty” to prop him up at the end.

And Miss Rogers, too, is amusing, so long as she can be a glamour queen dripping with vocal affectations and obvious emotional deceits. Mr. Clark is briefly voracious as the huckster, and Elsa Lanchester does a beautiful bit of farcical performing as a sex-starved lady college president. Anne Francis and Jeffrey Hunter are pleasant in the young romantic stuff, and Richard Garrick does a notably clever little bit as a weary judge. – N.Y. Times Review by Bosley Crowther, July 26, 1952