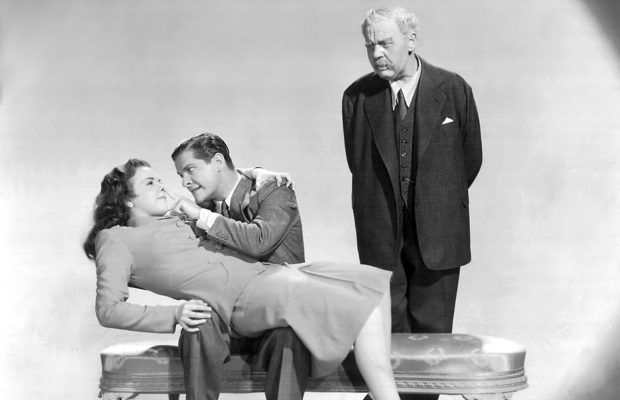 Toronto Film Society presented It Started With Eve (1941) on Monday, December 12, 2016 in a double bill with Dreamboat as part of the Season 69 Monday Evening Film Buff Series, Programme 4.

John DiLeo critiques in his 2008 book Screen Savers: 40 Remarkable Movies Awaiting Rediscovery, that It Started with Eve, the box-office hit, was given little respect.  The team of producer Joe Pasternack, director Henry Koster and plucky teen soprano Deanna Durbin rescued Universal from its financial woes of the mid 1930s when they collaborated on Three Smart Girls.  Tonight’s film was their sixth, final and best feature for the combo.

With an original story by Hans Kraly, It Started with Eve was written by Norman Krasna and Leo Townsend.  Krasna may never have become a household name yet he had considerable impact on American comedy of the last seven decades.  A master at mistaken-identity plots, Krasna’s influence is still on view today in the better situation comedies.  With hit plays like Dear Ruth (1944) and Sunday in New York (1961), and screenplays for Bachelor Mother, The Devil and Miss Jones (1941), and his Oscar-winning Princess O’Rourke (1943), Krasna proved himself a consummate craftsman of comic structure and logic.  The plot of It Started with Eve is meticulously fashioned; it may sound silly and absurd yet everything that happens in it has a moment-to-moment believability.  The characters make the soundest choices within the options open to them; the script never pushes them to make stupid “funny” choices.  Yes, we ask comedies to take us on a ride, but if a script violates the truth inside its premise, however outlandish, an audience will resist (and stop laughing).  The plot of It Started with Eve is certainly improbable, but Krasna and Townsend crafted it so expertly that we can accept everything that happens in it and gladly be whisked away.

This is the third pairing of Durbin and Cummings (after 1939’s Three Smart Girls Grow Up and 1940’s Spring Parade).  Her grounded nature was nicely complemented by his flightier on-screen tendencies.

Interestingly, It Started with Eve was remade in 1964 as I’d Rather Be Rich with a reversal of the sexes.  Sandra Dee plays the Robert Cummings role while Robert Goulet plays Deanna’s.  Maurice Chevalier plays Laughton’s role.

We hope you enjoy this delightful film!

Durbin’s best film. To please a dying father, Deanna poses as the son’s fiancée, but when the patient shows signs of recovery, complications arise. Lots of fun, with Laughton in fine performance mode. – Barry Chapman

He has the figure for it. You might even say he has the face. And, since the range of his acting has covered almost everything else, it is not at all surprising to discover Charles Laughton playing cupid in Universal’s It Started With Eve, which came to the Music Hall yesterday. A nice old cupid he is, too—not the conventional, underdressed type, of course, but an ancient and mellow variety with white hair and a droopy mustache, frisky little crotchets and a twinkle in his eye. And, since the targets for his archery are Deanna Durbin and Robert Cummings, be assured that It Started With Eve has what it takes to make a fresh and pleasing film.

Henry Koster, who directed the picture and has directed most of Miss Durbin’s better films, certainly knew how to get the best out of Mr. Laughton, that man of great renown. For this is one of the sharpest performances the old boy has given in years. As a stubborn, cantankerous old Gotrocks, who carefully engineers a match between his son and a strange girl whom the boy recklessly introduced as his future bride, Mr. Laughton plays with flavor, mischief, humor and great inventiveness. He knows how an old man would behave—and he never carries it too far. Under a perfect make-up, you’d hardly know it was Mr. Laughton—which is saying a lot.

Further, Miss Durbin is as refreshing and pretty as she has ever been and sings three assorted songs—including a Tchaikovsky waltz—with lively charm. Mr. Cummings is a manly young fellow and does all right as her unintended beau, especially in a couple of rollicking scenes with the rebellious young lady. And Walter Catlett packs a lot of humor into the part of a prissy old doctor, Charles Coleman makes a fancy butler and a small, but competent, cast brings up the rear.

It Started With Eve is light and unpretentious fare. And the title doesn’t mean a thing. But it skips to a cheery tune and should please—as they say—both young and old. It’s the perfect “8-to-80” picture. – N.Y. Times Review by Bosley Crowther, October 3, 1941