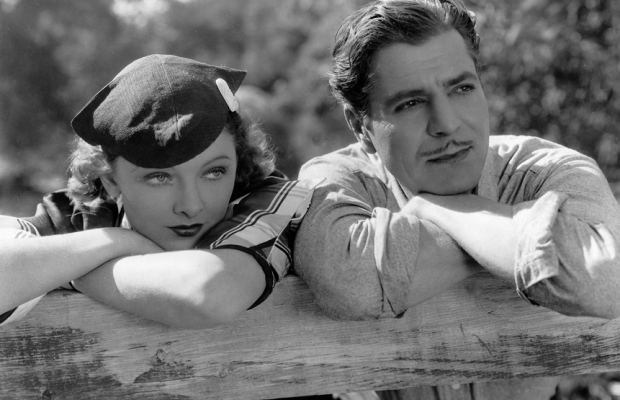 Also known as Strictly Confidential, Broadway Bill’s screenplay was written by Frank Capra’s most important collaborator, Robert Riskin, who had a hand in thirteen of Capra’s films.

Broadway Bill followed on the heels of Capra’s Oscar-winning film It Happened One Night and he was anxious to live up to his previous success.  Ironically, It Happened One Night made Clark Gable into too valuable a star for MGM to loan out to Columbia again, so Capra had to settle for Warner Baxter in the role of Dan Brooks.

Capra felt that the ending of Broadway Bill needed to say something more bittersweet, more ambivalent about the American success ethic, but wasn’t sure what and how to go about it.  Riskin was unavailable to assist Capra, having left on a European vacation, so he hired Sidney Buchman who had just moved to Columbia after three years at Paramount, where his most important credit had been on DeMille’s most enjoyable over-the-top film The Sign of the Cross.  Born in Minnesota, Buchman was an Oxford graduate who had worked as an assistant stage director at the Old Vic before becoming a playwright and screenwriter.  Harry Cohn had an unusually high regard for the young man, who would write Mr. Smith Goes to Washington and be elevated to Cohn’s executive producer and heir apparent.  Capra and Buchman discussed the changes over dinner, the director explaining that the emotion generated by the ending would explain the Baxter’s character’s love interest.  Buchman felt that this ending was one of Capra’s “astounding” ideas, with which the director “saved” the film.

Buchman finished the four pages of new scenes at two in the morning, a few hours before Capra shot the final scene of the film.  He received no credit, which was not unusual in those days, before the Screen Writers Guild (SWG) won the right to watch over such matters.  But when Capra remade the film in 1949 as Riding High, he used the changes to Riskin’s 1934 script as one of the key points to persuade the SWG the he deserved to share the writing credit, claiming to have come up with the new ending and writing the scenes himself in Riskin’s absence.  Not only did Capra fail to mention Buchman as the contributor, he did not mention to anyone that the ending had been suggested to him by his friend Albert Lewin, a producer at MGM.  Lewin did not take kindly to this ignored fact, and let Capra know this in no uncertain terms.  Capra promised he would never fail to recognize Lewin’s crucial contribution to the film from then on.

Broadway Bill was not a huge success in its day and we can safely say it is one of his lesser known films made between It Happened One Night and Mr. Deeds Goes to Town.  But enjoy!  It’s still a Capra film.

Introduction by Caren Feldman
Source Material from Frank Capra: The Catastrophe of Success by Joseph McBride (1992)

Another Runyonesque racetrack comedy, breezily directed by Frank Capra in his positive, wisecracking, all-American style. A wonderful cast puts this one over, including Bill! – Barry Chapman

Reviews:
Baxter, who’s “sold out” and married money, risks his marriage and his future on a racehorse; Loy, his wife’s sister, seems to be the only one who believes in him. The unremitting good cheer of this Capra concoction overcomes its flaws. Script by Robert Riskin, from the Mark Hellinger story On the Nose. Remade (by Capra) in 1950 as Riding High–using some of the same actors, and even some of the same footage. Look fast for a young, blonde Lucille Ball as a telephone operator. – Leonard Maltin

As a preamble to the holiday bird and bottle, the Music Hall presented a highly ingratiating photoplay by the author and director of It Happened One Night. A sly and impertinent screen comedy, painlessly whimsical and completely engaging, Broadway Bill unfolds the fresh and inventive talent of Frank Capra in a mood of high good humor. Out of the sentimental simplicities of Mark Hellinger’s story, Mr. Capra manufactures the kind of entertainment which pleases the thin-nosed sophisticate as well as the ribbon-counter empress and the affrighted defender of the public morale. So skillfully does he wield his gently satirical cameras that, if you are not aware of the portentous matters he is spoofing, you are still under the impression that the screen is providing an uncommonly pleasant experience. For Mr. Capra owns a rare gift for cinema. It is a fortunate coincidence that he bestows it for the greatest good of the greatest number.

To report that Broadway Bill tells the story of Warner Baxter, Myrna Loy and a race horse is to write down a series of words which can be singularly unimpressive in cold type. A sedate résumé of Mr. Hellinger’s story would tell nothing of Mr. Capra’s richly humorous inventions. Somehow no scene which he photographs is quite ordinary. There is, for example, the comic episode which discloses the complicated procedure of gossip and big inside stuff by which the two-dollar gamblers in a thousand parts of the country hasten to get their money down on Broadway Bill, thereby forcing the odds down from 100 to 6 to 1. In the pompous dinner-table episode in the Higgins mansion the diners lift their soup spoons in a casual yet precise rhythm which identifies the household for the robot factory that it really is. When on occasion the action threatens to slow down to normal Mr. Baxter is persuaded to invent a lunatic tune on the subject of a can of succotash and a can of pea soup.

The players who work for Mr. Capra have a habit of performing at the top of their talent. Mr. Baxter is enormously agreeable as the Dan Brooks who fights his way out of the cubby hole where life and circumstance have conspired to imprison him. As his sympathetic assistant, the Princess, Myrna Loy reaffirms our faith in her, both as a light comedienne and as a person. Then there are Walter Connolly as the omnipotent oom of the Higgins enterprises, Clarence Muse as the diverting stable-boy, Lynne

Overman as the skeptical racetrack tout, Raymond Walburn as the strictly phoney gentleman who calls himself Colonel Pettigrew, and the charming Helen Vinson as Dan’s chill and conservative wife. Broadway Bill is passed without reservations and Mr. Capra is recommended for a furlough with pay. – New York Times, by Andre Sennwald, November 30, 1934