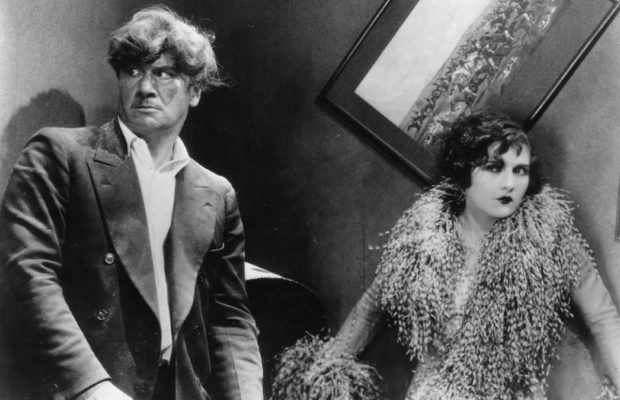 Josef von Sternberg, the American director and one-time cameraman with the German name and style, has had a bizarre and often fascinating career.  His first film, Salvation Hunters, made independently on a shoestring (shown in the Silent Series’ first season) was a strange, slow and intriguing “arty” effort that set off violent controversy between its idolators and detestors.  After an undistinguished movie for MGM called The Exquisite Sinner, and the Chaplin-sponsored Woman of the Sea with Edna Purviance which, said to be merely a series of beautiful images, was never released, he was hired by Paramount to make Underworld, which hit the film world of that day with quite a bang.  Robert E. Sherwood summed up the general reaction in writing: “I never dreamed he had anything like this in his system!”  Later, in his Marlene Dietrich period, (The Blue Angel excepted) he became obsessed with exotic pictorial effects to the virtual exclusion of all other values, so that his films became little but collector’s items, with every shot lushly lovely to look at but put at the service of senseless, empty stories, if one could call them that at all.  But in the silent Paramount era of Underworld, The Drag Net, The Last Command, The Case of Lena Smith and The Docks of New York, while taking great pains with his visual compositions, he still took some reasonable interest in the story and characters, so that these remain his most balanced pictures, despite occasional worthy dialogue productions like An American Tragedy and Crime and Punishment.  His last work, the Japanesse-made Anatahan, is characteristically strange, beautifully shot, fascinating but dramatically unsatisfying.

Of Underworld, the Museum of Modern Art Film Notes say:

“Realistic treatment of violence and crime, fairly common in earlier movies, had been so steadily, if imperceptibly, banished from the screen that Underworld upon its appearance created a considerable impression with its relatively frank, uncompromising picture of gangland and comparative lack of whitewash.  The widespread fame of Chicago’s underworld lent the film a particular timeliness and sharpness which it hardly seems to possess today; the notorious gunman whose career provided it with picturesque details recognizably drawn from life is now forgotten.  Today it is the smooth flow of its narrative, able use of lighting and settings to enhance the drama of the situations, and above all a quite peculiar feeling for textures, which distinguish the film.  In 1927 it set a fashion for gangster pictures that lasted far into the first years of the talkies.  Even the mawkish love scenes, even the namby-pamby ending can be forgiven for the sake of the admirable handling of the scene after the gangsters’ ball, where Bancroft stumbles through a tatter of paper-streamers which contrive to be eloquent of all the sordid and uneasy surroundings of Bull Weed and his kind.”

Wrote Lewis Jacobs in The Rise of the American Film:

“One of the first and best of the Chicago gangster pictures; the plot was compact, dramatic.  Von Sternberg brought to it a realistic atmosphere, striking lighting effects and compositions, characterization expressed through deft angle closeups and selection of typs, a sense of timing and economy of means (the jewelry store holdup was shocking in its impressionistic effect) and above all a freshness and discipline that made the melodrama outstanding.  Unquestionably a new director had ‘arrived’.”

Messrs. Bardeche and Brasillach in History of the Film opined:

“Sternberg was the most interesting personality working in America at that time.  His crime films Underworld and The Drag Net launched a new fashion–of tough, grim, surprisingly realistic crook stories–unfolding smoothly and unsentimentally, with a gradually accentuated rhythm that eventually rose to some terrific conclusion.  Underworld and Bancroft’s brutal and expressive physiognomy set the model, which benefited in this case by the almost mathematical precision and extreme care with which it was constructed.”

However, translator and editor Iris Barry, in a postscript to B. & B.’s book disagrees:

“These films were really not so stupendously good as they fancy, though at the time they appeared they had an exotic air and a bravado of toughness, as well as a fine but conscious photographic gloss, which made them enjoyed abroad to a degree out of proportion to their merit.”