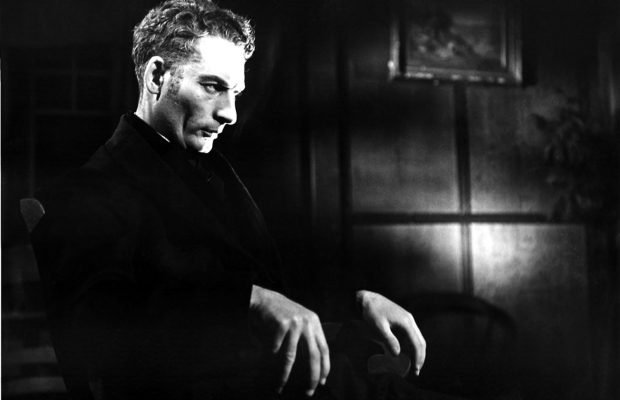 Season before last, a majority of our voting members selected the French “avant-garde” programme (Menilmontant, The Smiling Madame Beudet, Entr’acte, Ballet Mecanique) as the one they had liked best during the season–so we thought it would be in order to present another such programme, even though both films involved were shown by the main group of TFS several years ago.

Of this film the Museum of Modern Art Film Library says: “In this impressionistic study of commonplace life in Paris, the camera seems chiefly concerned with the painterly values to be found in the ordinary, but there is more than a hint of the social implications of city life.  Cavalcanti, a Brazilian, was later to join the British documentary group.  Suitable for adult audience only”. (!)

My own recollections of the picture certainly include an impression of some strong (if implied) social criticism, as well as some fairly grim satire in the “eating” sequence.

After his documentary work in the ’30’s (on Night Mail among others) Cavalcanti turned to making British features (The Foreman Went to France, The Halfway House, Went the Day Well, Champagne Charlie, The First Gentleman, parts of Dead of Night).  Later he returned to make films in his native Brazil.

Jean Epstein, (1897-1953) though he made a number of commercial pictures, is chiefly noted as a director of avant-garde, experimental and documentary films.  Always a storm-centre of heated critical controversy, he has been called everything from a sublime film artist to a hopeless incompetent.  Perhaps his best-known works, aside from tonight’s feature, are Finis Terrae and Coeur Fidele–both fiercely eulogized and attacked.  I recall the latter film as evidencing a rare and laudable determination to tell a story by purely cinematic means, and a considerable talent for doing so–also a regrettable tendency to overwork his effects, to continue hammering home a point long since made.  Both admirers and critics generally appear to consider The Fall of the House of Usher his most successful work.

Our TFS programme notes in 1951 said: “Influenced by earlier German expressionist films, it was based on two stories by Poe.  To create some of the mysterious atmosphere, the film relies almost entirely on camera devices–low-key photography, slow motion, effective use of curtains, drapes, candles.  The explanation of dramatic details is left deliberately to the spectator’s imagination.  The camera work is extremely fine, the compositions striking.  The man members who voted for this film as one they wished to see will be disappointed if they approach the film expecting clear narrative details.  Neither of the Poe plots was followed closely; each was used merely as the basis for ‘an essay in the macabre'”.

Henri Langlois of the Cinematheque Francaise believes that in Usher Epstein “fulfilled himself in a perfect work, a faultless whole.  Everything contributes to this masterpiece’s unity: the absolue mastery of the editing and the rhythm, in which slow motion, superimpositions, and a mobile camera meaningfully play their parts.  There is not a shot nor a technical operation that does not beautify the film; they are there to impress us in the most noble sense, like the images and cadence of poetry.  The qualityof the photography, worthy of the greatest masterpieces of the German film–the lighting, which transfigures the sets, clothes them with a mystery indispensable to the action.  Since the French impressionist school has always considered the cinema to be like a visual symphony, we might call this film the cinematic equivalent of Debussy’s works.”

One critic wrote in 1929: “if there are states of mind, spiritual stirrings and mystical atmospheres which the screen can express more vividly and creatively than written words, they are surely those painted with such an eerie and expressive texture by Jean Epstein in this haunting recreation of Poe’s celebrated story.  For he has transmuted the broody spirit of that weird tale into a canvas of absorbing fantasy and visual beauty.  He has exercised such ingenious camera craft, he has expressed the inexpressible in such strange movements and symbols, and has so combined the fantastic in setting with the fantastic in humanity, that he has in many ways gone further than the power of the story.  As such it is scarcely fair for the conventional film fan, but for all who have faith in the expressiveness of the cinema, who care for its fantasy and its art, Usher is an offering the rarity of which makes it valuable”.

Marie Epstein writes: “Epstein, having founded his own production group, was able to bring into being this subject which had long been haunting him.  What captivated him in Poe’s tales was their poetic charm much more than their morbid charm.  He saw nothing horrible in them: ‘All these dead persons (he used to say) are only slightly dead.  Madeline and Roderick feel that they are going to die, just as we feel sleep overcome us.  Roderick lies in wait for the sounds at the threshold of the tomb as we lie in wait at the door of a room for a tired nocturnal guest to wake Mystery is there, an equilibrium is reached in which a soul is shown now in life and now in death.’  In order to express this mystery and this charm, Epstein used all his masterful technique–the first time that he gave such dramatic importance to slow motion, which he was later to use regularly in order to lose no part of the most fleeting aspects of life.  It is interesting to note that this film, kept by all film libraries as a museum piece, was reissued in 1948 for the general public, and ran for several months in the same theatre in Montmartre where it  had been shown for the first time 20 years before”.

Said Claude Mauriac in Figaro Litteraire, Paris, 1954: “I am indebted (to television) for the showing of Epstein`s Fall of the House of Usher, in which expressionism does not distort a most secret discipline, which is that of masterpieces”.

Next Programme: November 30.  The American Silent Comedy
Harry Langdon in The Strong Man, directed by Frank Capra.
Charlie Chaplin in The Count.