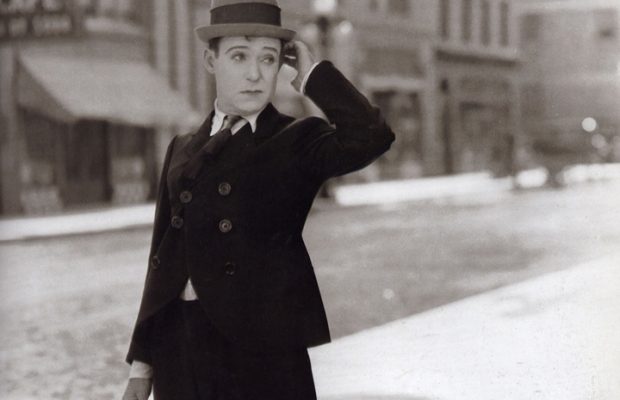 The Count.  Directed by and starring Charlie Chaplin, with Edna Purviance.  One of the celebrated comedies of his Mutual period.

James Agee called Chaplin “the first man to give the silent language a soul.  Of all comedians he worked most deeply and most shrewdly within a realization of what a human being is, and is up against.  The Tramp is as centrally representative of humanity, as many-sided and mysterious, as Hamlet, and it seems unlikely that any dancer or actor can ever have excelled him in eloquence, variety or poignancy of motion.  Before Chaplin people were content with a couple of gags per comedy.  He got some kind of laugh every second.  The minute he began to work he set standards–and continually forced them higher.  Most of the time, he got his laughter less from the gags, or from milking them in any ordinary sense, than through his genius for what may be called inflection–the perfect, changeful shading of his physical and emotional attitudes toward the gag.  The finest pantomime, the deepest emotion, the richest and most poignant poetry were in Chaplin’s work.  He could probably pantomime Bryce’s The American Commonwealth without blurring a syllable and make it paralyzingly funny into the bargain.”

After an apprenticeship in vaudeville, Harry Langdon had a meteoric rise in a series of hilarious and popular short comedies for Mack Sennett.  Graduating to features at First National, he brought along his director, Frank Capra, and together they made three remarkable pictures–Tramp, Tramp, Tramp, Long Pants (shown by TFS a couple of years ago) and tonight’s film, generally agreed to be his best.

James Agee, in an oft-quoted but always apt appreciation of Langdon, said in part: “Chaplin, Keaton and Lloyd were more like each other, in one important way, than Harry Langdon was like any of them.  Whatever else the others might be doing, they all used more or less elaborate physical comedy; Landon showed how little of that one might use and still be a great silent-screen comedian.  He symbolized something as deeply and centrally human as the Tramp, though there was an immense difference in inventiveness and range of virtuosity.  It seemed as if Chaplin could do anything, on any instrument in the orchestra.  Langdon had one queerly toned, unique little reed–but out of it he could get incredible melodies.

“He seemed like an outsize baby who had begun to outgrow his clothes.  Twitchings of his face were signals of tiny discomforts slowly registered by a tinier brain; quick, squirty little smiles showed his almost prehuman pleasures, his incurably premature trustfulness.  He was a virtuoso of hesitations and delicately indecisive motions.  He was as remarkable a master as Chaplin of subtle emotional and mental process, and operated much more at leisure.

“There was a sinister flicker of depravity about the Langdon character, all the more disturbing because babies are premoral.  He had an instinct for bringing his actual adulthood and figurative babyishness into frictions as crawley as a fingernail on a slate blackboard, and he wandered into areas of strangeness which were beyond the other comedians.

“The minute Frank Capra saw him, he begged Sennett to let him work with him.  Langdon was almost as childlike as the character he played.  He had only a vague idea of the story or even of each scene as he played it; each time he went before the camera, Capra would brief him on the general situation and then, as this finest of intuitive improvisers once tried to explain his work, “I’d go into my routine”.  The whole tragedy of the coming of dialogue, as far as these comedians were concerned–and one reason for the increasing rigidity of comedy ever since–can be epitomized in the mere thought of Harry Langdon confronted with a script.

“Langdon’s magic was in his innocence, and Capra took beautiful care not to meddle with it.  ‘If there was a rule for writing Langdon material’, Capra said, ‘it was this: his only ally was God.  Harry might be saved by the brick falling on the cop, but it was verboten that he in any way motivate the brick’s fall’.

“Langdon became quickly and fantastically popular with his three notable features–then he went downhill even faster.  ‘The trouble was’, Capra says, ‘that highbrow critics came around to explain his art to him’.”

After two more features, self-directed and uneven in quality, (Three’s a Crowd and The Chaser) First National cancelled his contract.  In sound films he was reduced to supporting roles (“comic relief” in other stars’ films) and eventually dismal two-reelers for Columbia.  He died broke in 1944.  “He never really did understand what hit him”, says Capra.  “He died of a broken heart.  He was the most tragic figure I ever came across in show business”.

FRANK CAPRA, an Italian-American with a deep faith in the American way, has turned his hand to almost every sort of film.  Apart from the Langdon comedies and some Screen Snapshots shorts, he has expertly turned out, at one time or another, action films (both on a “B”and epic scale), soap-operas starring the young Barbara Stanwyck, then the type of light-hearted American comedy that first brought him popularity–Lady for a Day, It Happened One Night, Broadway Bill.  As the years went by, these comedies became more and more elaborate in structure and style, and showed (however much they were still fables) a steadily increasing social concern–Mr. Deeds Goes to Town, You Can’t Take it With You, Mr. Smith Goes to Washington, Meet John Doe.  After a brief venture into macabre farce (Arsenic and Old Lace), he made the famous wartime Why We Fight series of Geovernment documentaries (Prelude to War, The Nazis Strike, The Bttle of Britain, The Battle of Russia, etc.) which were brilliant examples of his editing skill.  After the war he made several successful, characteristic films–State of the Union, It’s a Wonderful Life, Riding High–but after a weakish Bing Crosby comedy, Here Comes the Groom, he turned to TV and such televized documentaries on Our Mr. Sun.  Recently he returned to the screen with A Hole in the Head, which has been successful with most critics and at the box-office–but somehow lacks the old drive, pace and style.