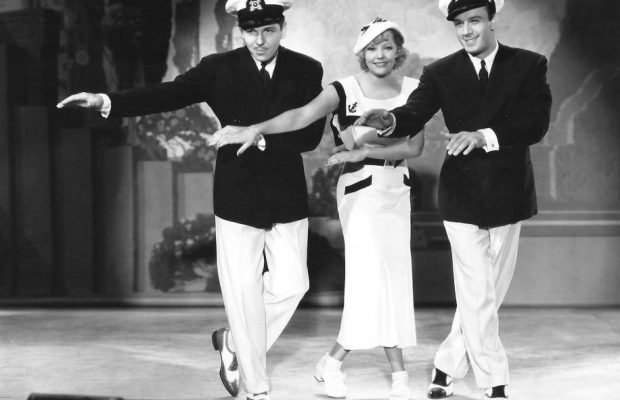 Toronto Film Society presented Wake Up and Dream (1934) on Sunday, June 23, 2019 in a double bill with Whoopee! as part of the Season 71 Sunday Afternoon Special Screening #12.

I learned about the singer Russ Columbo while reading Robert Matzen’s book “Fireball: Carole Lombard and the Mystery of Flight 3”.  Columbo and Lombard were an item and apparently, in 1934, he was at the same level of fame as Bing Crosby.

Wake Up and Dream was Columbo’s tenth screen role and his first to headline.  He was at the premiere to introduce the film and, I’m figuring the next morning, on September 2, 1934 he went to call on his best friend Lansing Brown to find out why he hadn’t been there since he said he would be for moral support.  With Brown’s parents in the next room, the two were conversing in the library when suddenly there was a deafening explosion.  As recounted in the book “Fireball”:

He (Lansing) had put a cigarette in his mouth and then struck a match on the hammer of one of two pistols on his desk.  What were the odds that there was a percussion cap on the pistol in the first place, or a slug in the barrel?  What were the odds that, even though the pistol wasn’t even pointed at Russ, that said slug, traveling at extreme low velocity, would strike the desktop and bounce into the one place that could prove lethal: Russ Columbo’s eye socket?  Had it hit him any place in the body with bone underneath, a superficial wound would have resulted and nothing more, but the lead ball punched through his eye and just far enough into his brain to cause a mortal wound.

What a bizarre and horrible accident!  And I was intrigued to see more with regard to this man.  Because the title of the film is somewhat surreal, I recalled that it was in my collection and thought it a good time to view Russ Columbo in his one and only lead role.

The principal actors weren’t people I knew.  Roger Pryor, who had played in just over 50 films—none of which I think I’ve ever seen, is reminiscent of all those actors who play nice-guys but usually don’t get the girl. June Knight, who only had 12 film credits to her name, and the only movie I’d seen was DeMille’s Madame Satan (1930) where she had a bit role in the party scene and probably would be hard to recognize even if you were on the lookout for her.

But the supporting cast was a delight.  It featured Henry Armetta in a somewhat frenetic role; one of my favourites, Andy Devine, as a drunken “boy toy(!)” for Madame Rose (Catherine Doucet); Wini Shaw, as the glamorous night club performer/gold digger Mae LaRue wanting to get her hooks into Columbo but will settle in the meantime for Richard Carle; Paul Porcasi, legendary owner of ten coastal nightclubs; and funny, crusty and seemingly always old Clarence Wilson.

Although this film was probably made and certainly released after the July 1st, 1934 Production Code was put in place and which required all films to obtain a certificate of approval, for this said release, director Kurt Neumann still appeared able to get away with remnants of pre-Code naughtiness.  When Paul’s “adoptive” father, Giovanni Cellini (Henry Armetta) arrives on the scene, they, Toby and Charlie need to escape from their boarding house room (which it appears the three of them share!) to avoid being seen by Detective Hildebrand (Clarence Wilson).  The conversation, using the colloquialism of the day, dick, to describe Hildebrand is bantered around with the Italian-accented Cellini asking the question, “What’s a dick?” just as he bangs his head on the window frame of the fire escape before the scenes fades and the four of them are on a bus heading somewhere else.   What makes the last sentence particularly funny is the bus scene opens up with Cellini eating a banana with the follow-up line, “Nothing like a banana; it’s so good.”  Maybe it’s just my warped sense of humour, but I took delight in this.

This is also the scene where we’re introduced to “psychic” Madame Rose and her “nephew” Joe Egbert (Andy Devine).  He’s accompanying the elder, flirty, flighty woman for her ability to keep him eternally inebriated and I can only suppose the pay-off for her is for him to keep her happy in the boudoir.  I know it’s somewhat weird that I find Devine slightly just that, somewhat divine, but it’s an odd choice for him to be cast as a stud, even if that character trait is somewhat under the radar.  So, and you will see why, Madame Rose sets her sights on Cellini, who’s closer to her age and appears available.  But interestingly, when Cellini is successful at thwarting her advances, he is so delighted that it almost appears he breaks the fourth wall, turning to the camera–and us–to show his pleasure!  Besides, if he likes bananas as much as he claims he does, then the outcome for Madame Rose may not be all that satisfying.

The ending of the film is typically hokey now that the pre-Code era was over, but the last line is of interest, with Charlie saying to Hildebrand, “Well little man, what now?”.  Universal, who produced Wake Up and Dream, had released earlier that year the film, Little Man, What Now? based on the novel published in 1932 by German writer Hans Fallada, the year before Hitler’s rise to power.  It’s possible the earlier released film was still in circulation and it’s my guess that it was a cute little way for the studio to promote it.  Coincidentally, TFS co-promoted this latter film with the Toronto Jewish Film Festival in 35mm just last month.

June Knight and Russ Columbo are both attractive people and their performances are enjoyable.  Columbo did have a wonderful voice and it’s a pleasure to listen to him every time he sings, and I’m not even a big film buff of musicals.  His first film role was in the The Wolf Song (1929), which I saw twice, at Cinefest in Syracuse, New York and later on at Capitolfest in Rome, New York along with another Gary Cooper film, The Texan (1930) where Russ Columbo also had an uncredited role in a scene at a campfire as a singing cowboy.

So, hopefully, you will all enjoy this rather light film with the unusual title, Wake Up and Dream. 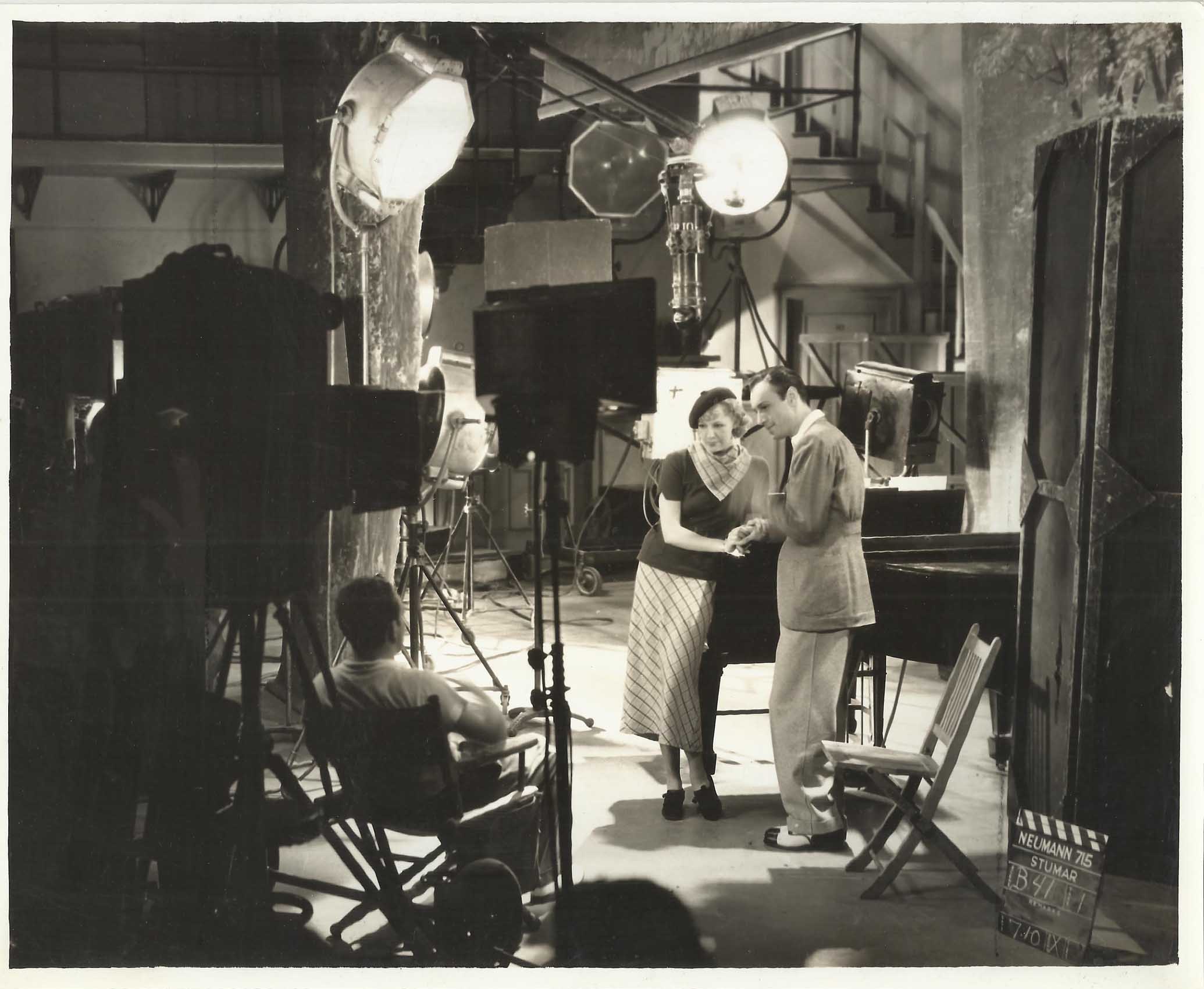 The coast preview of Wake Up and Dream was caught by both Variety and The Hollywood Reporter. Here is the Variety review:

“A vaude trio with a Three Musketeer complex come to Hollywood. One of the boys makes good, both love the girl member of the trio, one gives her up for the other. It’s all been done before, and with music, too; but, it hasn’t been done as well. Main credit is due to the comedy. Picture should be a money maker. It’s 100% entertainment. Wisely, Russ Columbo has been allowed to do little else but sing. That he does well. Crooner still lacks pliability, but has improved over his earlier efforts. With a cast of comics such as Roger Pryor, Henry Armetta, Andy Devine, Catherine Doucet, and Richard Carle—all getting everything there is out of their dialog and situations—there are few minutes in the picture without laughs. Story revolves around the trio, Columbo, Pryor, and June Knight. Unable to get by in vaude, they come to the coast on the cuff. Pryor, who has become Columbo’s manager, promotes him into a picture contract. Their trials and tribulations make the picture. Though the story is thin, the comedy sequences keep the picture going at a fast pace. There are several big laughs—Armetta’s love scenes with Miss Doucet; the drunk bit between Pryor and Devine; Pryor’s efforts to duck the cops under the impression they are after him. Entire cast steps out in front with performances. Miss Knight is impressive as the gal, loved by both boys, loving only Columbo. Pryor is at his best with the comedy, his forte on the stage. Kurt Neumann’s direction is fast. His comedy is all well timed. Settings and photography are excellent.” 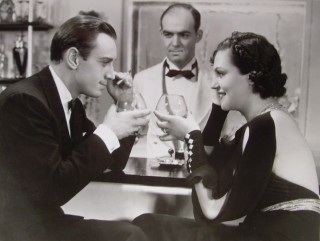 “Has all the assets of a Class A production…. Has many hilarious comedy situations….The dialogue kept the audience in good-humored laughter…. The picture has general appeal.”

The Hollywood Reporter also had nice things to say about Wake Up and Dream. For instance:

“Columbo gets the best break because of his songs, three crooning numbers, all destined for popularity, with ‘Too Beautiful’ a sure hit. The talents of June Knight are already proven. Given half a chance, she will become one of tomorrow’s stars for Universal. The gal is undeniably clever. Roger Pryor, too, is in the bag. Somehow or other, he manages to give a smooth, authoritative performance, grabbing first honors all the way. Watch Pryor. He is going places.” 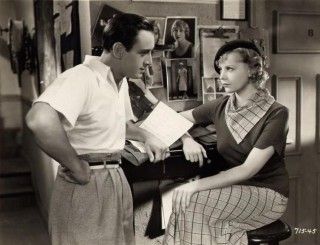 “Wake Up and Dream, not related except by title to the Charles B. Cochran-Arch Selwyn revue of 1929, opened last night at the Mayfair. On the whole it is an insipid musical comedy, built along stock lines and, through no fault of the producers, possessed of a morbid quality in that its principal player, Russ Columbo, was killed accidentally shortly after the picture was completed. On the melodic side, the film is fairly well equipped, providing one has a taste for crooning. The chief item of the score is a song called “Too Beautiful,” but even this becomes less impressive after its fourth or fifth rendition either by Mr. Columbo or June Knight, or both. The cast is generally satisfactory, with Roger Pryor turning in a sincere and likable performance, and with the always dependable Henry Armetta, Andy Devine, and Catherine Doucet giving the film a few comedy touches. The only regret is that they did not have more opportunities. The story, attributed to John Meehan Jr., but entirely indistinguishable from countless others dragged from studio shelves in the past, is that of the small-time vaudeville trio and its eventful way into the “big time.” The backstage material wisely has been subordinated to the triangular romance of the three principals; Mr. Pryor being enamoured of Miss Knight, Miss Knight of Mr. Columbo, and Mr. Columbo holding back in the interests of a lifelong friendship with Mr. Pryor. There is, at the end, the inevitable scene of renunciation in which the successful crooner pretends to have gone Hollywood to discourage the lovelorn young lady, only to be outsacrificed in turn by the heroic partner. No, Wake Up and Dream has no surprises.”