For Members and their Friends

This Special Programme has been planned to raise funds for the purpose of increasing the amount which the Society will be able to contribute this Season to Canadian Film Institute, with which it is affiliated.

The Society is not permitted to make a charge for this Programme, but donations may be accepted by the Society.

The amount of any donation to be made by those attending this Special Programme will be decided by the individual.  A 75¢ donation is, however, mentioned as an indication of the Society’s objective.

Humphrey Jennings was killed in Greece at the age of 43 a few months ago.  A post and surrealist painter, he joined the British documentary group in 1934.  His contribution to cinema is represented by some 20 films, among them London Can Take It, Listen to Britain, Silent Village, A Diary for Timothy, Cumberland Story.

Family Portrait is his last film.  It was made for the Festival of Britain to commemorate Britain’s contribution to civilization.  One of Jenning’s friends states that he sought for a public poetry, attempting to discover and activate the collective symbols of England: Beachy Head, Falstaff, the Long Man of Wilmington; the mythical Horse of Newmarket; the Thames, with it music of Spenser, Handel and Eliot.  Grierson calls it a meditation.

Family Portrait is a freak film in two respects.  In the first place it is made in a style which has completely disappeared today.  Its form is derived from the wartime Canada Carries On films of Stuart Legg, who in turn adapted the idea from Gordon Sparling of Montreal.  Sparling was the subject of magazine articles in the early ‘thirties for his brilliant successes in editing masses of apparently unrelated scenes into coherent films.  The second freak aspect of Jenning’s film is that instead of synthesizing it out of a mass of existing stock shots, he made a complete plan covering image, commentary and music before even a foot of film was exposed.  That Jennings chose this style is curious, however his superlative execution combined with consistent photographic quality has resulted in a highly successful film.

This sparkling film does its job of showing the status of applied art in Denmark with originality and great skill.  Pottery, porcelain, furniture, jewelry, Jensen silver and toys are all introduced in superb examples along with the artists involved in their creation. 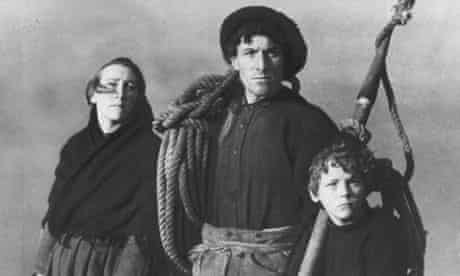 Off the coast of Western Ireland, Flaherty found another setting for his drama of man against the elements–in the barren, storm-swept Aran Islands where, completely isolated from modern civilization, the islanders snatch their existence from the teeth of the wind and the crest of the waves.  As an account of human dignity and bravery through the years, the film is a fine affair executed with realism, power and beauty of camera-work.  As in the case of all Flaherty’s idylls, the film came into being only after the director had lived in the locale with its inhabitants for a couple of years.  Members of Vancouver Film Society were deeply impressed with the film on viewing it recently.