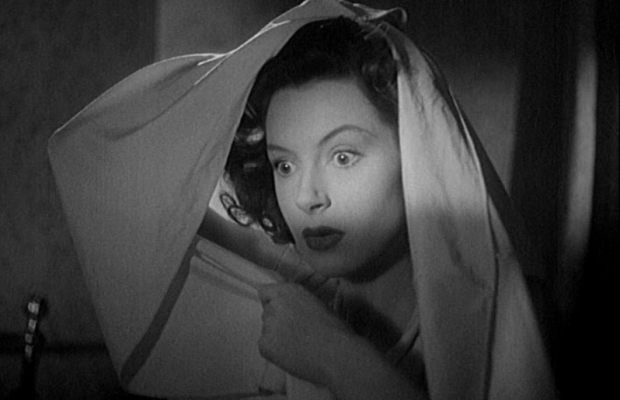 Toronto Film Society presented The Adventuress (1946) on Monday, February 21, 2012 in a double bill with Roxie Hart as part of the Season 64 Monday Evening Film Buffs, Programme 5.

Beautiful, talented Deborah Kerr holds a record that makes very little sense; she was nominated 6 times for the Best Actress Academy Award without a win – for: Edward, My Son (1950), From Here to Eternity (1954), The King and I (1957), Heaven Knows, Mr. Allison (1958) Separate Tables (1959) and The Sundowners (1961). Similar to her losing streak at the Oscars, Deborah was nominated for a BAFTA (British film) award four times without a win (though she was awarded a BAFTA “Special Award” in 1991). Kerr was popular and proficient, but – like that other “ladylike” nominee who never won, Irene Dunne – she was taken for granted. One suspects that Cary Grant’s observation about Dunne – that she didn’t win because her skills “made it look too easy” – applies to Kerr as well.

The Academy finally corrected this. Kerr was awarded an Honorary Academy Award in 1994, cited as “an artist of impeccable grace and beauty, a dedicated actress whose motion picture career has always stood for perfection, discipline and elegance”. The audience gave her one of the longest standing ovations in Academy history. At the podium to accept the award, Miss Kerr – a very shy woman – admitted that “I have never been so terrified in my life, but I feel better now because I know that I am among friends. Thank you for giving me a happy life.” Following another standing ovation, Miss Kerr left the stage. It was her official goodbye to Hollywood.

Kerr was born Deborah Jane Kerr-Trimmer in Glasgow, in 1921. “I was mad about ballet, but I grew too tall, and when I eventually realized I’d never become the second Margot Fonteyn, I auditioned for a play instead and got the part.” Producer Gabriel Pascal saw her and cast her in Major Barbara (1941). She was soon a British film star, playing roles as diverse as the three women in The Life and Death of Colonel Blimp (1943) and the troubled nun in Black Narcissus (1947). When Kerr came to California to work in 1947, she said her surname should be pronounced the same as “car,” so MGM studio head Louis B. Mayer happily proclaimed “Kerr rhymes with Star!” in film ads. Hollywood saw her as the perfect “English Rose,” a situation she soon found stifling. “I came over here to act, but it turned out all I had to do was to be high-minded, long suffering, white-gloved and decorative.”

She leapt at the chance to play the unhappy, adulterous wife who romped on the beach with Burt Lancaster in From Here to Eternity (1953). “I don’t think anyone knew I could act until I put on a bathing suit,” she later joked. “The scene turned out to be deeply affecting on film, but, God, it was no fun to shoot. We had to time it for the waves, so that at just the right moment a big one would come up and wash over us. Most of the waves came up only to our feet, but we needed one that would come up all the way. We were like surfers, waiting for the perfect waves. Between each take, we had to do a total cleanup. When it was all over, we had four tons of grit in our mouths – and other places.”

Kerr starred in many excellent films, including King Solomon’s Mines (1950), Young Bess (1953), Tea and Sympathy (1956), An Affair to Remember (1957) and The Innocents (1961). Co-stars found her a joy to work with. She won her celebrated part as Anna Leonowens in The King and I at the request of its star, Yul Brynner – replacing another impressive movie redhead, Maureen O’Hara. She and Cary Grant were very comfortable performing together and made three films. They improvised some scenes in An Affair to Remember, and several of their lines made it into the final cut. “Believe me, Cary and I knew how to kiss,” she said. “When we did a love scene… for those brief moments, we just loved each other.”

When filming Heaven Knows, Mr. Allison, co-star Robert Mitchum initially worried that Kerr might be as prim as the characters she played. Then she swore a blue streak at director John Huston during a take, and Mitchum (who was in the water) almost drowned laughing. Kerr and Mitchum also co-starred in three films, and he made it clear he wished there were more. He described Deborah as “The best – my favourite… Life would be kind if I could live it with Deborah around.” When Gary Cooper became too ill to play her husband in The Sundowners, Mitchum quickly agreed to step into the role, eager to work with her again. He also agreed to give Kerr top billing, joking that they could also “design a twenty-four foot sign of me bowing to her, if you like.” They remained close friends until his death in 1997. Kerr was also David Niven’s favourite co-star, and they made five films together. Like Mitchum, Niven found solace in Deborah’s company, but he actually managed to put it into practice: they were neighbours in Switzerland for many years and saw each other frequently. He adored her “femininity and humour” and they had a very close, jokey relationship. She playfully adopted a “gorblimey” cockney accent around Niven, and he called her “Hilda.” Perceptive Deborah was one of the few to realize his merry exterior hid a melancholy man; she fondly dubbed Niven “Mouse Face” when he was unhappy. Mutual friend Robert Wagner thought it a shame they didn’t marry: “That would have been perfect – a romance made in heaven. They were the most wonderful couple I ever saw together. They had the same sense of humour, and such a joyous time together.”

Kerr married RAF Squadron Leader Anthony Bartley in 1945, but the marriage was troubled by his jealousy and resentment over her career. They had two daughters, and divorced in 1959. In 1960 she married author Peter Viertel, and they lived in Switzerland and Spain. Uncomfortable with changes in the profession, she quit films in 1968 to concentrate on stage work, despite severe stage fright that never left her. Deborah eventually moved back to England to be closer to her children as her health failed. She died from the effects of Parkinson’s disease in 2007, aged 86. Severely stricken by the loss, Peter Viertel died less than three weeks later.