Toronto Film Society presented An Ideal Husband (1948) on Monday, December 10, 2018 in a double bill with On Approval as part of the Season 71 Monday Evening Film Buff Series, Programme 3. 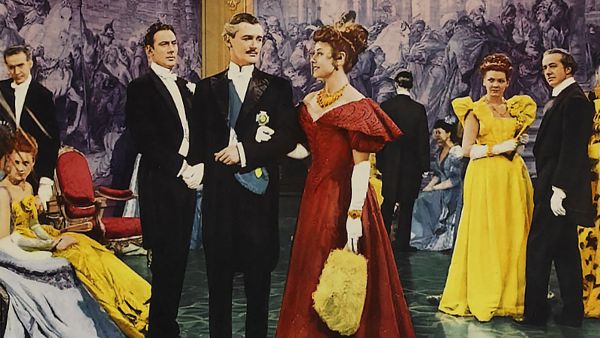 An Ideal Husband is a film adaptation of the Oscar Wilde play, with the screenplay by Lajos Biro. A Hungarian like Korda, Biro worked for Korda’s London Films Productions as a scenario chief and screenwriter. The film was liked, but not very successful and not without controversy in its day. Paulette Goddard was the only American in the cast, and she insisted on bringing her own hairdresser with her from America. This upset British Trade Unions, who thought that a British hairdresser should have been used. Korda brushed off their criticisms, saying that if Goddard’s hairdresser made her feel beautiful, then so be it. Korda also insisted that an imitation emerald necklace to be worn by Goddard be replaced with a real emerald necklace. When questioned on his decision to do this, Korda replied, “Because it will make her feel better.” Another extravagance and indication of Korda’s power and influence was his being able to use the Household Cavalry Mounted Regiment (HCMR) in the film; they wore their full dress uniforms. The Labour government of the day allowed them to be worn for escorting the future Queen Elizabeth on her wedding day. The expensive costumes, extravagant sets, and Technicolor did little to impress the British filmgoers, however. They were used to small films—made by Ealing Studios and the Boulting brothers—and Hollywood epics. A film based on an Oscar Wilde play was not something that the British public were interested in. Witty banter from an 1895 play did not resonate with the average filmgoer, and certainly not in light of just having lived through the hard years of World War II.

Although the film was somewhat popular in Britain, it did very poorly in other markets. In America, for instance, An Ideal Husband and Korda’s Mine Own Executioner and Anna Karenina were picketed by a radical wing of the Zionist movement called The Sons of Liberty. They launched a boycott of all British films in 1948 to protest British policies in Palestine. The policies included limited Jewish emigration and a law against Jews purchasing land from Arabs. In some markets, the films were withdrawn from exhibition. Korda produced some very good and successful films, such as The Drum (1938) and The Four Feathers (1939), both of which were directed by his brother Zoltan Korda. His London Films Productions had become Denham Film Studios when he purchased property in Denham, Buckinghamshire in 1936. However, financial difficulties forced him to merge Denham Film Studios with Pinewood Studios and become part of The Rank Organisation. He signed a co-production deal with David O. Selznick in 1948 that resulted in The Third Man (1949), which was a critical and financial success. He continued to produce films through his controlling interest in British Lion Films. He worked with director Zoltan Korda and future Academy Award winners Carol Reed and David Lean through British Lion Films. However, most, if not all, of British Lion Films’ productions were small-budget films. That isn’t to say that they were commercial failures, not well done, or unpopular.

Alexander Korda was married three times; his second wife was actress Merle Oberon. His younger brothers were director Vincent and Academy Award winner Zoltan. The Alexander Korda Award for Outstanding British Film of the Year is presented in his honour by The British Academy of Film and Television Arts. In 1956, at the age of 62, Korda in London of a heart attack and was cremated.