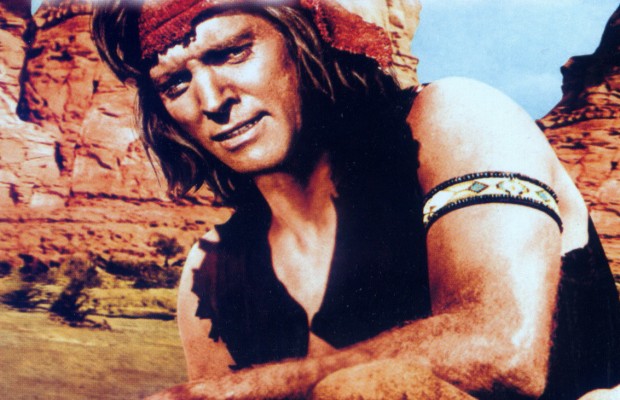 Toronto Film Society presented Apache (1954) on Sunday, February 1, 1981 in a double bill with A Tale of Two Cities as part of the Season 33 Sunday Afternoon Film Buff Series, Programme 6.

For the initial feature film under their Hecht-Lancaster Productions, producers Harold Hecht and Burt Lancaster chose Apache a story which attempted to turn around the Hollywood stereotype of the Indian.  Its aim was to present a sympathetic portrayal of the Indian people as seen through the point of view of a brave (Burt Lancaster), one of Geronimo’s (Monte Blue) men who escapes while being transported to prison at St. Augustine….

Wrote Philip French in Westerns (1973), “Particularly memorable are the opening sequences…where a garish white civilization is seen through the eyes of a fugitive Indian (Lancaster) making his way back West after escaping from a deportation train taking him to exile in Florida.  A tragic ending was planned for this picture, but the front office insisted on optimism and this is what the makers delivered in a hopelessly unconvincing manner.”

In his final screen portrayal, one-time matinee idol Monte Blue gave a most credible performance as the dying Geronimo at the movie’s beginning.  La caster, in his turn, having ably flexed his muscles through a series of early fifties’ swashbucklers, demonstrated here that he was capable of conveying a serious theme in the midst of an action drama.

“The original script ended with the hero, Massai (played by Burt Lancaster), going back up to a shack to be shot needlessly in the back by Federal troops…  Two or three days before shooting on the picture was due to finish, United Artists prevailed upon Hecht to shoot two endings.  I don’t know how it is in other countries, but in this country when you have somebody suggest two endings you know they’re going to use the other one.  So I refused to shoot the alternative ending and for about two days Burt agreed that the original ending was what this picture was all about.  Then for reasons best known to himself he changed his mind…  With the original ending I think the picture would have been more–‘significant’ is a pompous word–but I think it would have been more important.  You make a picture about one thing, the inevitability of Massai’s death.  His courage is measured against the inevitable.  The whole preceding two hours becomes redundant if at the end he can just walk away.

Robert Aldrich, from an interview in Sight and Sound, Winter 1968/69